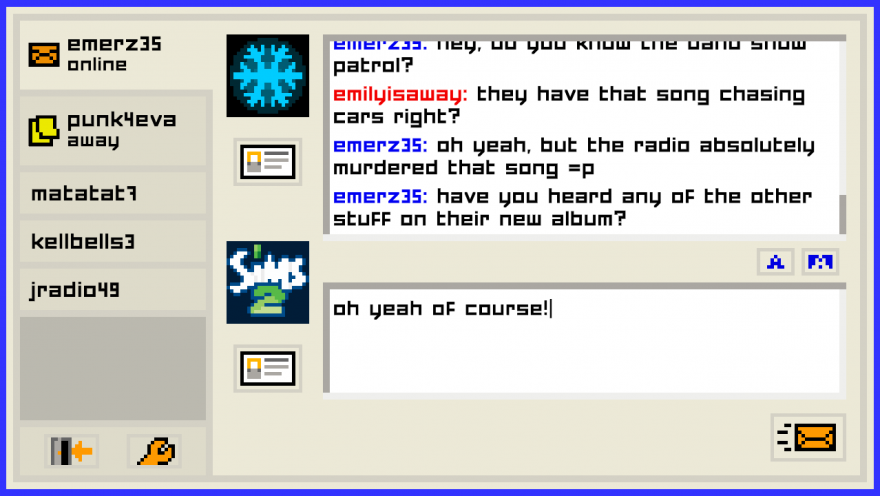 Emily Is Away was released just over a year ago, and since then, Emily has amassed a lot of friends—like, 1.5 million of them. Many of which will be excited to hear that early next year Emily Is Away Too, a sequel of sorts, will be released. Perhaps “spiritual successor” is a better word; Emily from the first game isn’t being carried over for the second game. Emily Is Away Too will have new characters—and a new Emily. Someone named Evelyn, too.

“The sequel behaves much more like a chat application,” creator Kyle Seeley said. “It features embedded links to websites, YouTube videos, Facebook profiles, and even supports file transfer.” Boot up your modems, folks. There’ll be so much more to dig into: the subtext of instant messaging punctuation, the curiosities of the perfectly crafted away message, the days when there was a “The” before Facebook. We’ll relive it again when Emily Is Away Too is released in early 2017.

Like Emily Is Away, the new game will attempt to recreate the days of high school and college, the days before MySpace and Kazaa died. “But it’s definitely a different story,” Seeley said, with “true multiple ending support unlike the original.” You’ll be able to chat with Evelyn and Emily at the same time, with, I suspect, real strategy and intrigue. Ah, the days of “oops, wrong IM!”

Emily Is Away Too doesn’t have an exact release date just yet; Seeley’s only set a window of early 2017. However, you’ll want to start choosing your screen name and perfecting your profile quotes soon—this is what shapes your public persona, after all.

Follow Kyle Seeley on Twitter for Emily Is Away Too updates, or check out the official site. The original Emily Is Away is available for free on Steam.