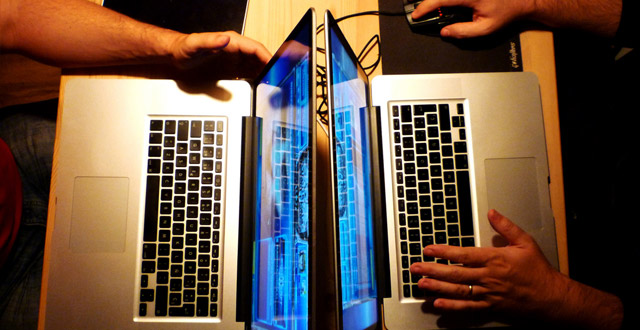 Late Friday evening, the city of San Francisco experienced its first touch of snow since 1976. The sudden change in weather, however, did not stop a crowd from gathering at the IGN Entertainment headquarters the next morning. Snowfall or shine, they came to participate in StartupCraft, a no-holds-barred, last-team-standing StarCraft II tournament for Bay Area tech companies.

The brainchild of the folks at Justin.tv, StartupCraft easily lures dozens of startups from the area because, apparently, engineers and programmers really enjoy playing StarCraft. Friends, coworkers, and family members were present, on the fourth floor of the building, to show support for the competitors. The tournament officially kicked off at 11 a.m., but Wi-Fi issues stalled gameplay by about an hour. Of the 90 or so competitors, it is uncertain if any were females.

Scanning the room, Justin Kan of Justin.tv exclaimed, “I doubt it!”

At approximately 2:15 p.m., two attractive, well-dressed women appeared, drawing the attention of every man, albeit briefly, from their computer screens. Their perfume wafted through the room and mixed with the aroma of pizza.

“We come to support our boyfriends. If they win, we will celebrate,” Elenitsa Staykova said in a thick accent—Bulgarian, perhaps? “Are you from TechCrunch?”

Their boyfriends, playing for Philanthropedia, were winners from last year and considered by some to be the favorites for this year’s 2v2 bracket. Alas, the two weeks of preparation, consisting of nightly practice matches after work, bore no fruit as they were eliminated not more than half an hour after the girls arrived.

“We drove here all the way from Palo Alto, and they just lost!” said Staykova, visibly disappointed.

At an adjacent table sat Ben Goldhaber, a recent Justin.tv hire, battling his first opponent, Rajiv Eranki from Dropbox. When asked why his Battle.net ID was “assmonger,” Eranki responded sheepishly, “Because that’s just what I am.” Goldhaber, a Diamond League player and frequent StarCraft commentator, easily advanced to the next round. After the two exchanged obligatory “gg’s,” Goldhaber beelined to the main station to commentate on another match, one of many that was streaming live on the Internet.

Throughout the day, Jeanne Dyer, executive director of marketing at IGN, patrolled the room in her black IGN T-shirt like a chaperone at a middle-school dance. She has never played StarCraft but indulges in the occasional session of Madden. “I play with my eight-year-old sometimes,” she said while taking a sip of beer.

The tournament victors emerged at approximately 6:45 p.m.—Tristan Brand of Palantir Technologies in the 1v1 bracket; and the duo of John Song and Eric Peng, representing PlayMesh, in the 2v2. A round of high-fives and cheers of “my life for Aiur” circulated the room as the winners accepted their trophies and Astro Gaming A30 headsets.

The eight-hour-long extravaganza depleted many resources—some 20 boxes of Extreme Pizza, a keg of beer (which dried up at 4:30 p.m.), packages of Ho Hos and Swiss Rolls, cookies, chips, M&Ms, a tub of Red Vines, three cartons of coffee, several crates of bottled water, and all the Coke, Coke Zero, and Diet Coke one could drink.

Proceeds from the event, which includes a matching donation of up to $3,000 from IGN, will go toward Child’s Play, a charity that provides toys, games, and books to sick children in hospitals. Kevin Lin, one of the tournament organizers, assured that the next StartupCraft will take place at a larger venue and attract even more companies. Although a date has not yet been set, it is safe to assume that the event will arrive sooner than the next snowfall in San Francisco.