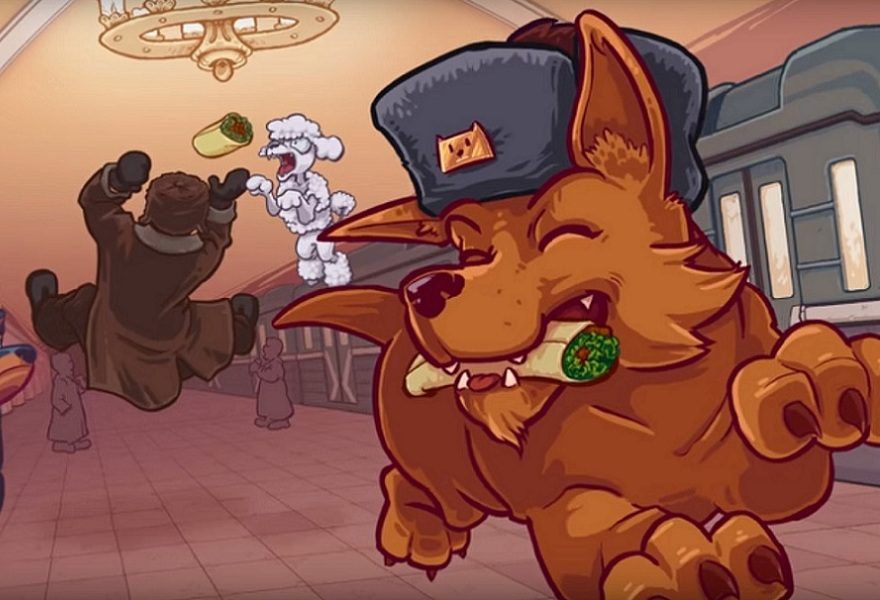 In the Mendeleevskaya station of the Moscow Metro there is a bronze statue, often decorated with flowers, titled “Compassion” which was erected in 2007. This statue is of Malchik, a stray dog that lived in the subway and was a friend of the railway workers. Malchik is the most famous, but to this day there is a population of stray dogs in the Moscow Metro in search of food. Russian Subway Dogs by Spooky Squid Games draws inspiration from these dogs in all their adorableness and complexity.

Originally made as an entry for the GDC Pirate Kart game jam (which you can still play here), Spooky Squid Games is now running a Kickstarter campaign to expand Russian Subway Dogs. Although it’s no surprise that there are stray dogs in the subways of Moscow, their scavenging strategy certainly is. The dogs are said to be able to identify specific stops where they can find the best street food, and have tactics for tricking people into giving them their food.

barking to get commuters to drop their food

The in-game pups take inspiration from the real ones, barking to get commuters to drop their food, with different kinds of commuters drop different kinds of items that give you bonuses. But those items can also give the rival dogs (and occasional bears) the same bonuses, adding extra incentive to catch the food as soon as possible.

One of the major changes Spooky Squid Games is hoping to bring with a successful Kickstarter is a campaign mode. Featured in the campaign mode is your delightful kitty commander Proletaricat, who gives missions and sub-challenges for every station you stop at. All these stations will be depictions of the real stations in the Moscow Metro, celebrating the unique and beautiful architecture of the subway system.

With a soundtrack by Gaucamelee! (2013) composer Peter Chapman, and the promise of more playable puppies (defined loosely, as this includes Cerberus and a goat), as well as a possible bonus level referencing Spooky Squid’s previous work, They Bleed Pixels (2012), Russian Subway Dogs has a lot to offer. And with a face inspired by Malchik, who could say no?

You can support Russian Subway Dogs over on Kickstarter