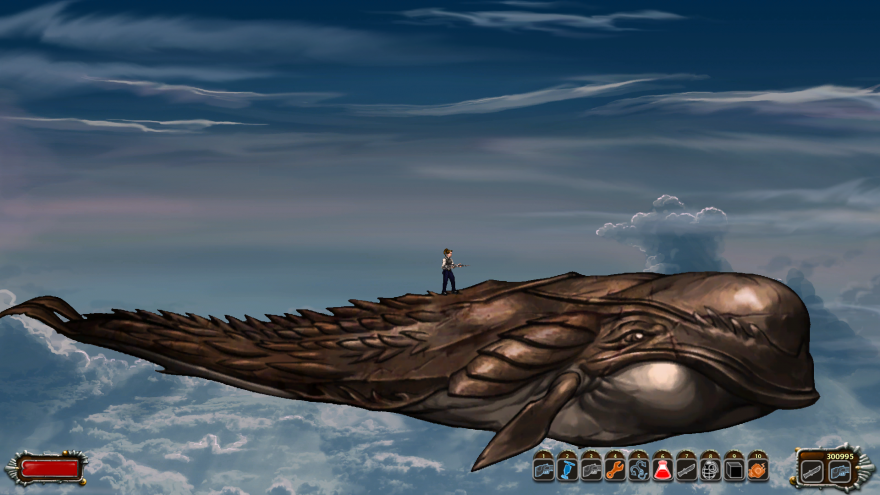 There is a Kate Beaton comic that I have been constantly reminded of while playing Windforge. In the comic, a steampunk aficionado approaches Isambard Kingdom Brunel, the English civil engineer, and shows him his goggles and boots and such. Brunel asks him what they do, “I put a shitload of cogs and watches on my boot!” the man replies. “Please tell me they do something.”

Making things “steampunky” for the sake of being cool is why steampunk as a genre gets a bad name these days. Which is a shame, because when done right, it’s a brilliant melding of Victorian culture with the genius and potential that embodied the Industrial Revolution. There is the beautiful “What if?” present in good steampunk. Novels like Scott Westerfeld’s Leviathan series show us what could have happened if we harnessed the power of evolution and Darwinism and took it to an extreme. Bethesda used the aesthetic and tech of the genre beautifully when crafting the Dwemer ruins in Skyrim. In both, nothing is ever unnecessary. Everything has a purpose.

Windforge, as a whole, is an unnecessary addition to the growing number of sandbox games being introduced.

The game looks and functions a bit like Starbound. You have one tool that will break down everything, a range of weapons, and different enemies that will screw you up to varying degrees. The main idea is to build yourself an airship and explore the world of Cordeus all while continuing to search for a new source of energy to replace the dwindling supplies of whale oil. The sky whales, you see, have been hunted nearly to extinction.

And this story is where Windforge first falters. Adding a plot to a sandbox is as unnecessary as the aficionado’s be-cogged boots. It’s a nice touch, sure, and it allows the game to call itself an RPG as well, but it detracts from what could otherwise be an enjoyable experience. In my time I spent with the game, I had more fun building my airship and ramming it into whales than I did progressing through the storyline. Why complete tedious tasks when you can grapple across jungles or fall several levels down to fight giant drilling monsters? The story isn’t even necessary for a lot of items; loot drops from just about everything regardless of whether or not you’re searching for the mysterious new power source.

Unfortunately, there’s not a lot to love about Windforge leftover. Overall, the game does not feel entirely well thought out. It’s sloppy in places where it should be fine-tuned. Enemy encounters, for example, are consistently easy because the enemies tend to throw themselves at one block of dirt repeatedly or get stuck—which is actually a decent example of how the AI functions as a whole. The crafting system feels clunky and lacks easy accessibility. And while the world of Cordeus is a many leveled one, the individual levels themselves blur into a monotonous experience. There’s the impression that much more could have been done to polish the game to a decent shine. Instead, it’s lackluster.

I watched someone turn a dead whale carcass into an airship and sail away inside its belly.

But the game does do a few things right. Being able to build an airship out of just about anything is a sublime delight. There is no limit to what you can sail through the skies in. I watched someone turn a dead whale carcass into an airship and sail away inside its belly. It was equal parts disturbing and awe-inspiring. And Snowed In Studios, a Canadian company, uploaded a video of a flying likeness of Rob Ford crashing into a group of civilians that reminded me of the fun I actually had while playing this. A sandbox game promises a sort of bedlam, and I enjoyed crashing my ship into whales just to piss them off, and then trying to punch them when I ran out of bullets. When I fell from my smoking ship, I landed on the back of another whale that I then murdered and crashed onto some trees. I massacred a town just to see if I could kill NPCs (I could). I leapt onto an enemy airship while they were attacking me and took out their balloon and sent them plummeting to the ground. It was chaos, and it was gloriously entertaining.

The problem is, you could have this much fun in a better built sandbox. With its plot-driven play, Windforge lacks the casual and more easy-going atmosphere of the already established King of the User-Generated Mountain, Minecraft. Windforge’s technical failures don’t help, when Starbound is just as entertaining, and doesn’t crash four times within the span of an hour and then corrupt my autosave. Admittedly, patches can be made for these things and problems can be fixed, but will players come back to Cordeus after it’s been polished up? Or will they have already loaded up Terraria, found it more welcoming, and moved on?

Because Windforge feels unnecessary and indulgent, with few, brightly shining moments of fun interspersed. Like those who consider steampunk to be nothing but a fashion aesthetic, the game exploits the genre simply because it can and because it looks pretty. Ultimately, you will sacrifice playability for art style and unfinished ideas. Can you squeeze it in between generous helpings of Minecraft and Starbound while still leaving space for the growing genre? Because on my plate, it doesn’t fit.