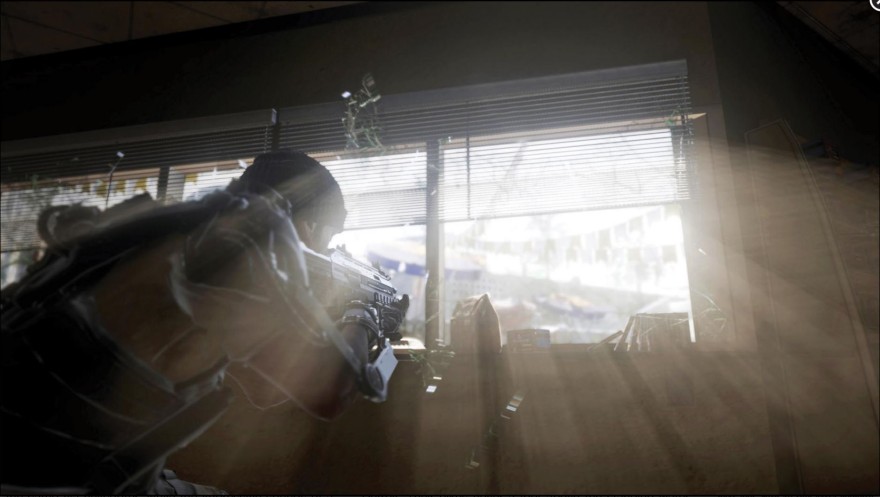 You slowly make your way through a ruin, looking for a way out. You are alone. The dim light could hide all manner of enemies looking to kill you. You can’t help but fire at shadows.

This is the mood in one part of Call of Duty: Advanced Warfare. In a level called “Bio Lab,” the player’s exosuit loses power. Suddenly, the advanced soldier isn’t so advanced anymore. You wind up moving through dark rooms without any knowledge of the situation around you. Enemies could jump out from a dark corridor at any time and gun you down. The result is minutes of tense movement, interrupted by jump scares just like those from Dead Space.

Which makes sense, given that the game is being made by Dead Space’s creators. But it also fits the tone of the Call of Duty series, even if it is a new one. Sledgehammer Games’s Chief Creative Officer Glen Schofield said, “When we talked with some of the veterans, they talk about being in a battle is a big rush, but they also talk about being scared. What’s around the corner? You don’t know.”

And so the devs’ Dead Space experience is being put to good use to mix things up for the venerable FPS. It’s a matter of pacing and tone. Sledgehammer has crafted the levels to have a greater variety of peaks and valleys. Scenes of quiet exploration transition into firefights which break down into a cinematic moment, which then leads to stealth, which then leads to something else.

“Activision encouraged us to take some risks.”

Michael Condrey, the head of development for Sledgehammer, told me that they have a history of games with narrative and that they were going to live up to that. “Activision encouraged us to take some risks and put our stamp on this franchise. From Dead Space, and even Modern Warfare 3, you had those levels that were just about the pacing and the more subtle nature on how to shock and surprise the player,” said Condrey.

Survival horror games traditionally thrive on somehow weakening, infantilizing, or thwarting the player. But when you have a game that takes place in the year 2058 and features future tech like enemy-seeking grenades and cloaking devices, how can such an empowered player be afraid? Schofield said that the opponents will be just as advanced, with their own futuristic weapons and gadgets such as swarms of flying drones or hover tanks. And besides, you won’t always have your full arsenal, such as when the exosuit malfunctions. Condrey added, “You are outnumbered and outgunned. It puts a lot of fear and tension into those moments.”

Even with the slow-motion next-gen arm-removals shown in its trailer, the game’s most affecting moments weren’t caused by gore. As in a film like The House of the Devil, successful horror really comes down to pacing. Sledgehammer seems to get that.