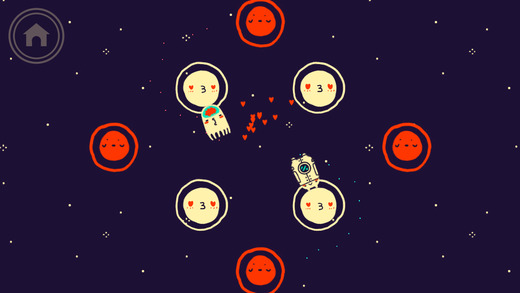 There are times when love can feel less like a battlefield, and more like an unending wasteland with lightyears of empty space. You’re left adrift, any suitable entities to interact with far and few between at best (by which I mean centuries apart). You radio out into the abyss for your George Clooney or Sandra Bullock, but all you hear back is cold, hard static.

Until one day, cosmic-lightning strikes.

According to Alec Thompson, who just released iOS game Stellar Smooch with artist Jenny Jiao Hsia, “Space in general has a lot of romance surrounding it.” Set to the love story of two deep space probes, one sent out by humans and the other by an alien culture, it’s up to the player to matchmake this odd couple into defying both time-space and statistical probability alike. Though not your most typical location for romancing, to Alec, outer space “is just so much bigger, older, and emptier than anything we can comprehend” that “impact which might otherwise be ‘normal’ contact, like bumping into someone, is amplified by the rarity of the occasion.”

“Outer space can teach us a lot about love because it reminds us of how small we are and how limited our endeavors are compared to that vastness of the unknown,” Jenny adds. “Like, when we do find meaning in an exchange, it can feel like your entire universe has been thrown off course and there’s something really incredible about that—when you feel like the stars have aligned for you and it hits you—that all of a sudden you feel so small and so out of control.”

In Stellar Smooch, the space probes begin each level caught in the gravitational pull of a distant planet, their potential paramour equally occupied on the opposite side of the screen. Until you thrust them into orbit, that is, presumably through the sheer inertia of serendipity. If timed correctly, the result is a lip-locking collision so interstellar that even Neil de Grasse Tyson might blush a little.

So began the tragic, star-crossed dance of these two lonesome probe.

The concept for Stellar Smooch began in a MFA class Alec was taking at the NYU Game Center, taught by Bennett Foddy (of QWOP fame). The theme of the assignment one week, to make a game for an alien culture, consumed Alec’s mind with so many thoughts of space that eventually he had an intense dream about the Voyager probe. In it, “Voyager had gone for centuries without any kind of meaningful contact and was super lonely (it was anthropomorphized, for some reason). Then it saw an alien probe in the distance and the two of them passed by each other with no contact to drift away for eternity.” Alec awoke from the dream with tears in his eyes, and vowed to correct this extremely depressing and unsatisfying ending with a prototype.

So began the tragic, star-crossed dance of these two lonesome probes lookin’ for some lovin’ in a sea full of nothin’. “Gravity in space has this amazingly simultaneous sadness and hope to it,” Alec says. “Like, if you make contact with someone, you’re guaranteed to drift away for basically forever. But, if it was just you and one other object in the entirety of space, you’d also be guaranteed to eventually meet, no matter how long it took.”

Each chapter of Stellar Smooch is divided into two-line verses of a poem, with words Alec hopes will convey “the profound joy in finding something in common (such as another object created by intelligent beings) in an otherwise alien environment.” Though each collision is only a smooch (no tongue, I can assure you), Alec believes “there’s something very fundamentally human about brief moments of contact, coming together, drifting apart.”

In a story where the probes have “effectively been drifting an unfathomable amount of time with only the stars for company,” the anticipation of that cosmic collision shapes your entire experience. Outside of a few exceptions, the levels present equally clever yet intuitively solvable timing puzzles, which culminate into the catharsis of the epic moment of contact, literally shaking up the whole screen. When Jenny signed up for the project at first, she inititally envisioned “a very colorful and globular world,” in emulation of the aesthetics of an artistic children’s books. But something about the design didn’t sit right with her, so she reinvented Stellar Smooch twice over from the ground up (the evolution of which you can see in the photographs below.)

Alec agrees that the weightiness of the poem combined with Jenny’s equally sobering (though still beautiful) design made “the whole game feel a little too self-serious.” Then one time, as a joke, Jenny began adding ridiculously silly facial expressions to each asteroid and planet who witnessed the stellar smooch between the probes. This added sense of playfulness transformed the game into a more enchanting world, according to Alec. Jenny also dialed down the complexity of the coloring, limiting herself to only a five-color palette, which solidified the more innocent look evidenced in the current version. Jenny only hopes that the added expressiveness in the characters will help “you feel like you can celebrate alongside the planets, or identify with their sense of loss when they weep uncontrollably as the two space probes pass each other and float off into the depths of space.”

Though only an undergraduate at the Game Center, Jenny achieved her goal with masterful levels of cuteness. With the poem’s haunting relatablity, including a verse about how “dents in metal are just memories of an embrace,” and Jenny’s impressively emotive audience of space beings, the tango between the two probes becomes electric. Provocative, even. With each defiant press of cold metal lips to cold metal lips, a flurry of fluttering hearts explodes among the stars, and the player begins to see what Alec means when he says that “even extremely brief points of intimacy in an otherwise boundless magnitude of existence can still be super important and meaningful.”

Which is to say, you can probably stop feeling ashamed of that random hook up you had recently. You know, with whoever picked up the radio signal you put out once it became clear that George Clooney wasn’t orbiting anywhere nearby? Stellar Smooch assures you that the impulse to come together and drift apart, is only human. When cosmic-lighting strikes, just roll the cosmic-dice, and see who you end up colliding with.