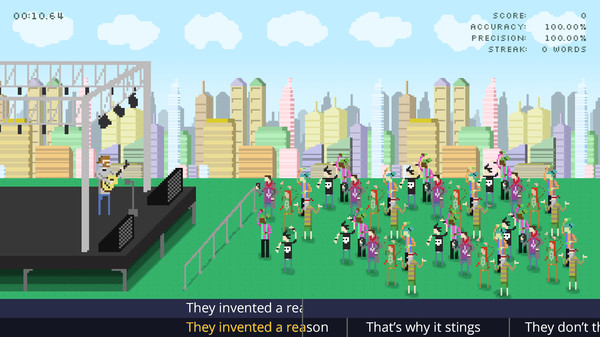 There are many reasons a writer might resort to fabulism. None of them are sufficient justifications, but some are more understandable than others. Chief among these reasons, one imagines, is the undeniable fact that transcription is miserable, tedious work.

Steno Hero, with apologies to Donald Trump but mainly to its creators, aims to make stenography great fun again. Talk about an uphill battle. It’s like karaoke, only instead of belting out lyrics to songs, you type them in sync with the music. Good luck with that. Mechanically, Steno Hero is Guitar Hero with words instead of notes. (The name may have somewhat given the game away.) The challenge of typing while listening to music, however, is that letters are not discrete in the same way as notes; they can be silent or combined in ways that mean your keys aren’t really clacking in tune with the music.


Life is full of distractions, even when you’re just trying to type. Sound recordings for transcription are notoriously awful. People talk over one another. Everyone other than you has an accent—only not really. All of which is to say that the distractions provided by Steno Hero, while not exactly lifelike, do serve a purpose. Stenography is not simply typing; it is the art of coping with distractions as you type effectively and at speed.

But is it fun? As far as typing training goes, probably. It all depends on your taste in music, I guess. There is, however, something mildly oppressive about the most menial of tasks being turned into stylized fun. Can grunt work not be grunt work anymore? There’s something to be said for making menial tasks more pleasant (namely: yes, please, and thank you) but Steno Hero isn’t actually doing that: stenography and transcription in the real world will remain boring and tedious tasks. At least you can now crack a smile while practicing.

You can purchase Steno Hero over on Steam.