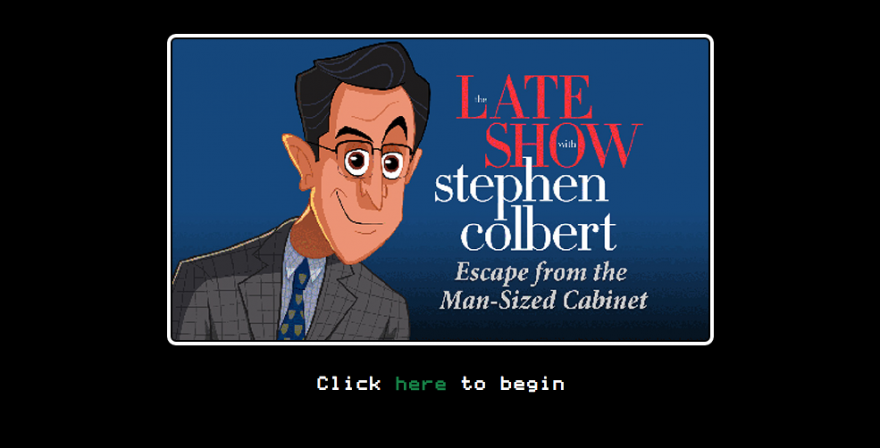 Stephen Colbert, last seen playing the character of Stephen Colbert on Comedy Central and soon to be seen as himself in CBS’ The Late Show With Stephen Colbert, currently has a bit of free time on his hands. That is both the subject of his new Twine game, Escape from the Man-Sized Cabinet, and the reason for its existence.

Escape from the Man-Sized Cabinet finds Colbert in his CBS office with nothing to do. The corporate suits have told him he can’t “drive go-karts inside anymore,” which leaves him with little else to but explore the nearby man-sized cabinet. Okay, it’s not Stephen Colbert we’re talking about here; it’s you, the player, as Stephen Colbert. (There is always a meta-layer to a Stephen Colbert persona.) Click around the text-based game’s many loops. Admire its weirdness. Find many things, including what is basically Narnia. Feel surprised that R-Kelly is nowhere to be found. Eventually, leave the man-sized cabinet to prepare for hosting the new Late Show.

With Colbert’s new show scheduled to debut in September, Escape from the Man-Sized Cabinet gives us a first opportunity to consider what his new persona will be. Late-night comedy is undergoing a tonal shift. Jay Leno’s Amy Winehouse jokes come off incredibly poorly in Asif Kapadia’s recent documentary about the departed musician. A couple weeks ago, David Letterman surprised the audience at Steve Martin and Martin Short’s show in Austin, Texas, by showing up on stage to deliver a signature top-ten list about Donald Trump.

its own brand of absurd comedy.

The punch lines of the Letterman-Leno generation have given way to outright enthusiasm. Jimmy Fallon is so enthusiastic and meme-like in his routines that it’s hard not to see him as an anthropomorphized emoji. James Corden would like you to know that he is very happy to be here, and also isn’t this all amazing? No, really, he really wants you to know that. Even the occasionally mean-spirited edge of Jimmy Kimmel’s comedy is really just the enthusiastic pursuit of a gag to its fullest conclusion. When it comes to late-night comedy, the setup-punch comedy structure has given way to a spiralling elaboration of premises. The big joke isn’t waiting at the end; it is the fact that the parties involved have kept going for so long.

The Colbert Report, while punchier than Fallon or Kimmel, was a nine-year spiralling elaboration on an absurd premise. It worked. We are told the “real” Stephen Colbert is far more earnest than his previous persona. To wit, last week he sat down with Neil deGrasse Tyson to geek-out about Pluto. Watching the video, you get the sense that Colbert could go on for hours, which may be the point. The interview suggests that the endless energy and enthusiasm of his Colbert Report days can coexist with a more earnest approach to making television.

Escape from the Man-Sized Cabinet offers an idea for how all of these different ideas might come together. The game doesn’t really lead anywhere and its individual components sometimes fall flat, but the exercise of enthusiastically pursuing the gag for so long creates its own brand of absurd comedy. There are even jokes, though not of the laugh-out-loud variety. The game mixes the absurdity of a Colbert Report episode with the digital-first gags of Fallon and co. Escape from the Man-Sized Cabinet may turn out to be an outlier, but it offers an interesting idea of what Colbert’s approach to mainstream late-night comedy may look like.

You can play Escape from the Man-Sized Cabinet in your browser.