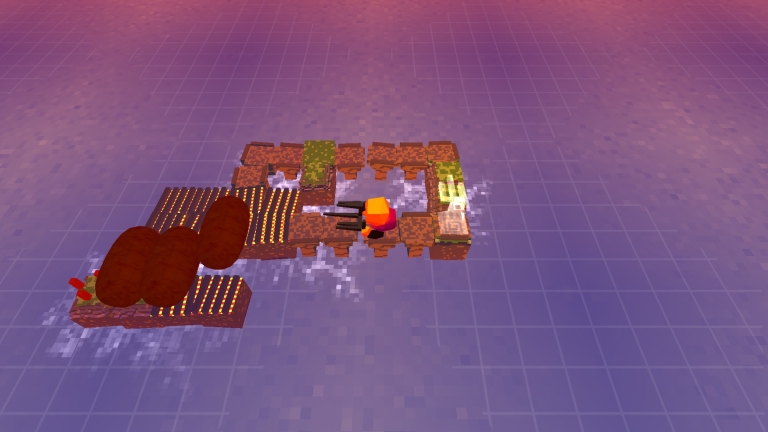 I’m a clunky Fisher Price toy on an island made of rough patches. My body, hands, and clothes are probably toxic, blistered and greasy, as I have spent hours pushing and shoving big honkin’ sausages across pipin’ hot grills in taxing and inconvenient ways.

I’m not wearing an apron. I am wielding a big fork; a mighty claw that swings in heaves. When raw, these sausages are wormy and pink. Halfway done they look like stogies. Upon being cooked you can smell the continental breakfast through the screen.They are easily the biggest sausages you’ve ever seen in a puzzle game. I’m assuming my character’s name is Stephen, because the name of the game is Stephen’s Sausage Roll.

Now I am staring down a dark tower of pork. Sausages and sausages stacked up like Jenga blocks. I could wedge a passage within the meat and hide in there forever; my fleshy fortress of solitude. I honestly don’t know where to start with them. The grills are on the other sides of barriers and narrows, and all of the viable options to move the sausages are paralyzing: surgically shimmy them across, knock them all down and make sense of the chaos, pierce them with my fork (it makes a toot noise when you puncture the meat casing), even balance the raw meat obelisk on my head (wearing it like a foul fuck-you hat in Beach Blanket Babylon’s hypothetical closing revue).

What I could do with this raw meat is overwhelming

But all I want to do is grill it to perfection. Roll each side over the flame once for that perfect texture. Any more and it’ll be burnt, the puzzle failed until I restart it. Again. God as my witness, this meat is getting cooked right.

Let’s talk about puzzle games. The Witness has revived a public lust for ornate brain teasers in a way that is primitively satisfying. Though The Witness’s puzzles pursue something far different, it has been compared to Myst a lot, mostly for feeling contemporary in its time, for feeling elegant, and because there’s a showboat to ride around its mysterious island. These are puzzlers meant to emanate sophistication, grandeur, grace. They’re supposed to feel like the kind of sudoku you’d play in Italian film director Bernardo Bertolucci’s office, where I assume the chairs are made of marble and a dashing red light glows behind the spare few windows. Echochrome (2008), Intelligent Qube (1997), Chime (2010), Tetris (1984)—the  puzzles of these games lean towards geographic simplicity, which feels inherently design-y and warm to the eye. In half of their instances, they forego intrusive scores for the quietness of a gallery hall. A lot of modern puzzle games follow this aesthetic. 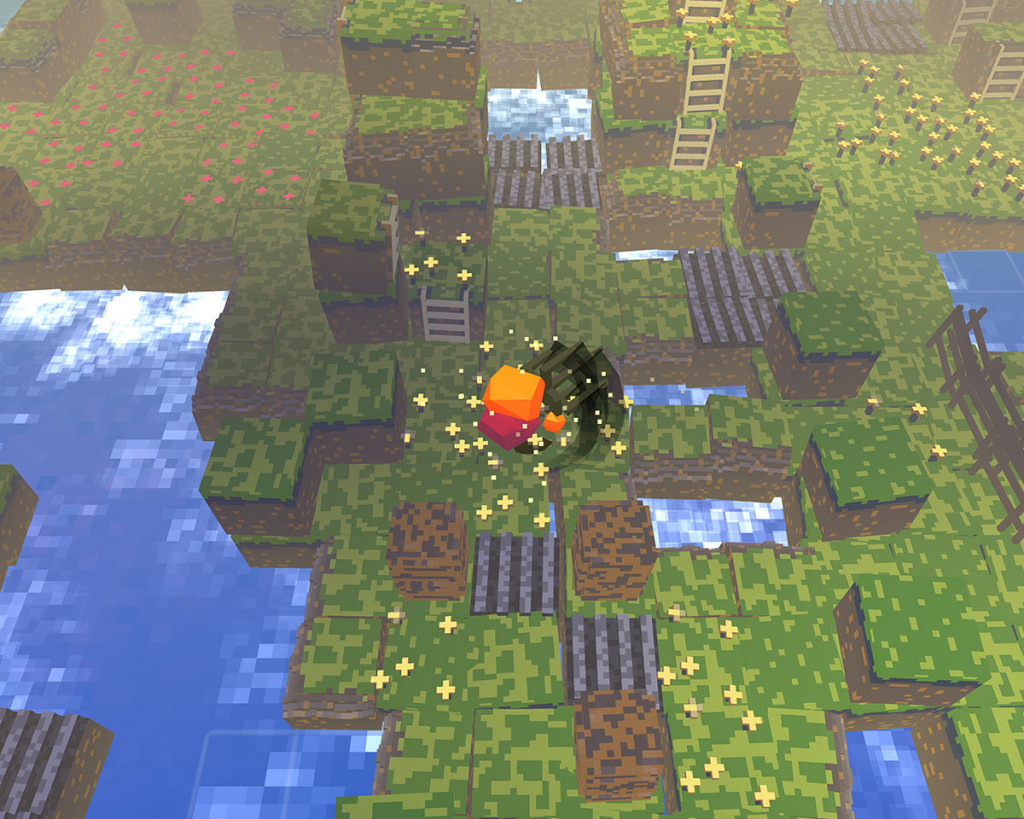 But don’t let puzzle history erase the genre’s blue collar heroes. There are no monuments for Charlie Blast, who blew up cactuses on the Nintendo 64 in Charlie Blast’s Territory (1999). And no one gives a damn about that poor schmuck in overalls from the obscure Sega Genesis puzzler Shove It! (1990). But with Stephen’s Sausage Roll, creator Increpare (aka Stephen Lavelle) has made a puzzle game that seems to remember this crude and forgotten past. He doesn’t make lookers. His games are a megaphone at the opera.

With Increpare, you do not underestimate rough as simple, and you do not make assumptions such as elegance lending itself to genius. It is not uncommon for social criticism to lurk just beneath the skin of his games, such as Striptease (2009) or Slave of God (2012), and even without that type of cleverness his games almost always feel like an aptitude test. Stephen’s Sausage Roll is a game about cooking sausages. But in that culinary activity it finds a glorious puzzle game. It reminded me most of Octat (2011) and Block Pusher Championship (2011). These are games that are not merely tough, but frustrating,

with extra stress coming from your multitude of mistakes

And what a damn klutz you are.There have been countless times where I have overcooked a sausage or rolled one into the ocean. You can always move back a move, you can even undo out of the level and into the previous one, but they feel like band-aids for boo-boos. Generally speaking, while playing Stephen’s Sausage Roll, I always felt like I was wearing a traveller’s backpack in an art gallery: trying to stay conscious of my space while not toppling over any mixed-media pieces, instead knocking dozens of other people out of that mitigation.

Stephen’s Sausage Roll is tough and tumbly, with a greater emphasis on one’s own form than any other puzzle game, which usually waiver the avatar as too grotesque of its gorgeous world. The body, another heap of meat, becomes another piece of the puzzle. On several occasions I dusted my hands thinking I had completed a puzzle, before noticing I had blocked off the exit in the process. The feeling of form and clumsiness in these interesting puzzles demand you be all the more clever, the head-stumpers extended to your hands and feet.

Don’t let beauty erase you, you schlubby stars of puzzledom. You unfit geniuses. You grimey goblins. You may not be a dancer, you may not be a model, you may not be a statue for the world to marvel in its indescribable allure, but you are smart, and you can roast a hell of a sausage.