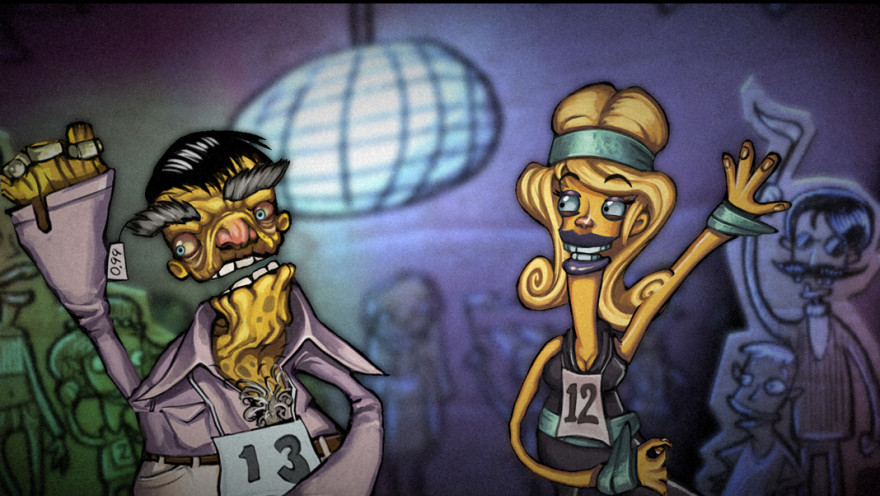 Title:
Stick It to the Man!

There is a channel called Teletoon here in Canada that, when I had cable in high school, played some exceptional cartoons past 10 p.m. or so each night. During the day it was bog-standard programming, but after the sun went down its usual lineup of kid friendly and hastily dubbed anime shows gave way to surprisingly interesting cartoons like the slacker-skewering Mission Hill, collegiate comedy Undergrads, and TMZ parody The Wrong Coast. These shows were weird, inventive, and well written enough to make a pretty good argument for watching cartoons past the age of 12.

Stick it to the Man, a PlayStation 3/PlayStation Vita downloadable from Zoink!, feels like the videogame adaptation of a forgotten member of that late-night cartoon schedule. Ray, the game’s protagonist, is employed as a hardhat tester in a two-dimensional world. After being knocked on the head by an object that falls from the sky on his way home from work, an elastic hand grows out of his brain. This strange growth lets him read and manipulate other people’s thoughts. But, since it’s invisible, everybody Ray knows thinks he’s lost his mind when he tries to explain what’s happening to him. What results is an offbeat odyssey that sees Ray trying to regain control of his life as he’s pursued by mysterious G-men through city streets, mental asylums, and an alien spaceship.

Though it detours into unpolished stealth sections, the real draw of Stick it to the Man is solving puzzles by interacting with the inner thoughts of a large cast of very funny and wonderfully bizarre characters. A decisive tone is set right from the outset. The game’s main menu loops The First Edition’s “Just Dropped In (To See What Condition My Condition Is In)” while players choose whether to adjust options, continue their game, or select a specific chapter. The twin references this song calls to mind—a wide-eyed Lebowski  drifting his way through a surreal bowling alley and the swirling pastels of acid-soaked psychedelia in general—are no accident. The song’s fuzzy guitars and Kenny Rogers’ lyrics (“I tripped on a cloud and fell eight miles high/I tore my mind on a jagged sky”) evoke the dreamlike weirdness of LSD culture without being so forward as to actually depict drugs. Whether the player cares to acknowledge the hallucinogenic oddity of a regular guy using telepathic powers to solve his problems or not, Stick it to the Man isn’t shy about nodding to its influences.

Everything about the game intentionally possesses the strange, hyper-real logic of a hallucination.

There’s a troubling tendency to view any unorthodox, highly creative work of art or entertainment as the product of a drug-addled mind (“How high must Lewis Carroll have been, man?”) yet Stick it to the Man undoubtedly anticipates that sort of reading. Everything about the game intentionally possesses the strange, hyper-real logic of a hallucination. Ray can discern everything about the strangers he passes on the street just by looking into their brains, interpreting the secret motives of each person with the hyper-awareness of a mind that believes it’s keyed into some barely hidden collective unconsciousness. Of course every police-like G-man is having an existential crisis regarding the usefulness of his job. Of course a sexist general will own up to his philandering if he suddenly becomes pregnant. The dying thoughts of a goldfish being digested in the stomach of a seagull would surely be a play on one of Hamlet’s famous soliloquies.

Stick it to the Man is a game that seems almost too obviously referential to a subversive subculture to look as bright and be as assertive as it is. But that doesn’t stop it from being as boldly weird (and ultimately super funny) as it is. In this way it’s quite a lot like Teletoon’s late-night programming. Despite the colourful animation, those shows were meant to be watched by people who are able to pick up on the undercurrent of absurdity running just below their surface. Stick it to the Man, with its constant emphasis on exploring the inherent strangeness that hides behind the exterior of our supposedly logical world, belongs to this tradition.