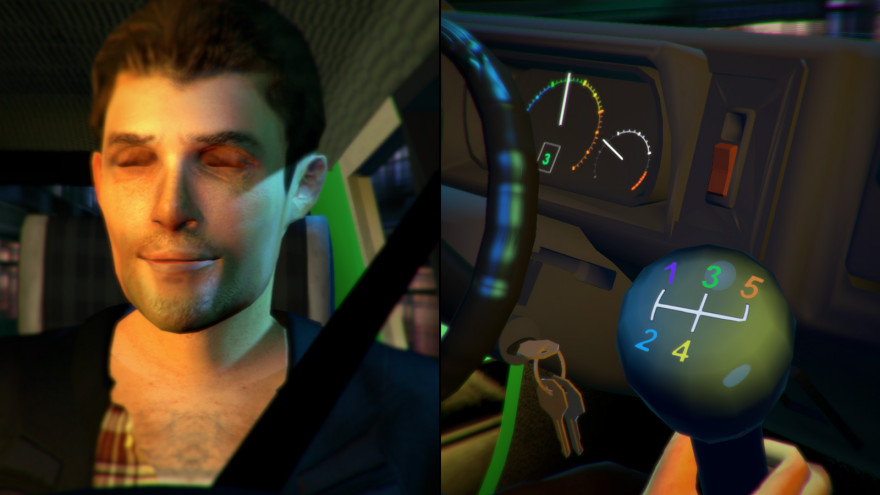 It’s a game in which your’re tasked with pleasing a gay car. The obvious phallic symbolism of the vehicle’s stick shift plays the part of penis. It is gently pumped along to your own wrist movements upon your computer mouse, shifting through the gears to accelerate the sexual excitement in stages, and eventually reaching climax. Unless, of course, you get overzealous and cause the car’s revs to tick over and the engine to cut out (finishing early), meaning you’ll have to start over.

Blow Job is all about expression. You watch a man from the chest up who, it is suggested, is being fellated. You don’t know if he is, and so you explore the contortions of his face to reach an opinion. In adapting this idea, the biggest challenge for Yang was in animating convincing facial expressions. It’s why he obfuscated the men’s faces in his previous games, either with a large pair of sunglasses, or by having their head turned away or cut out by the camera.

Yang overcame the issue of falling into the uncanny valley in Stick Shift by framing the gesticulations of the guy’s cheek and brow with the much more obvious gesture of sexually stimulating a car—that he’s experiencing arousal should be obvious. But, with this, the uncertain promiscuity of Warhol’s film is lost. Yang, instead, takes the conceit in his own direction, exploring themes more in line with Ballard’s novel.

The critical perception of Crash is that its imagery and themes act as a metaphor for society’s dependence on technology as an intermediate in human relations. Its main character, James Ballard, finds arousal in the bruises and scars left by car gadgetry and dashboards plunged into the soft parts of human bodies during crashes. He compares the rushing gullies of the British motorways to the neck of vulvas. The jutting carapace of the steering column is made from a mold of a pelvic region in Ballard’s wild eyes.

Yang’s Stick Shift draws similar lines. The engine purrs before it growls as the swollen head of its stick is serviced. Once it’s over, the exhaust pipe drips hot condensed vapor into a puddle, limply depositing the by-product of its orgasm, while the driver smokes from inside the parked vehicle. There’s also a timer that counts down to when you are permitted to replay the game; it’s a momentary cool down that represents a refractory period. In this way, all four participants—the driver, the car, you, and your computer—are connected in the moment, human and machine interlocked in post-coitus recovery. The imagery and metaphor is even more appropriate now than when Ballard’s novel came out in 1973, before the arrival of sexting and camming.

But that’s not all. You may not experience another aspect of Stick Shift yourself as it only appears 48 percent of the time. It sees two cops armed with M4 rifles, riot sticks, and grenades interrupting you during your surging sexual rumpus. Yang connects this to the The Stonewall Riots in 1969, when the gay community fought back against the police by “denying their authority through flamboyance. They kissed and made-out. Free self-expression was its own protest, and it utterly humiliated the NYPD,” as Yang tells it.

Similarly, you can have the driver make kissy-faces at the two cops during your own mini-protest, which in turn drives up the countdown timer as a punishment. The purpose of this isn’t clear without its context, which is to reflect an experience specific to the queer community when communicating with the police. That it happens 48 percent of the time is a reference to this March 2015 Williams Institute report, which states that “of the LGBT violence survivors who interacted with police, 48% reported that they had experienced police misconduct.”

Knowing this, and combining it with the similarities to Crash, Stick Shift reveals itself as a vignette about a gay man’s intimacy with technology, which allows him to live out his sexuality when parts of society would shun him for it. Having recognized my own queerness and eventually accepted it due to the internet, through a computer, Stick Shift‘s technosexual concept seems less ridiculous (as those I’ve shown it have judged it) and more affirming than anything.

You can download Stick Shift for free on itch.io.