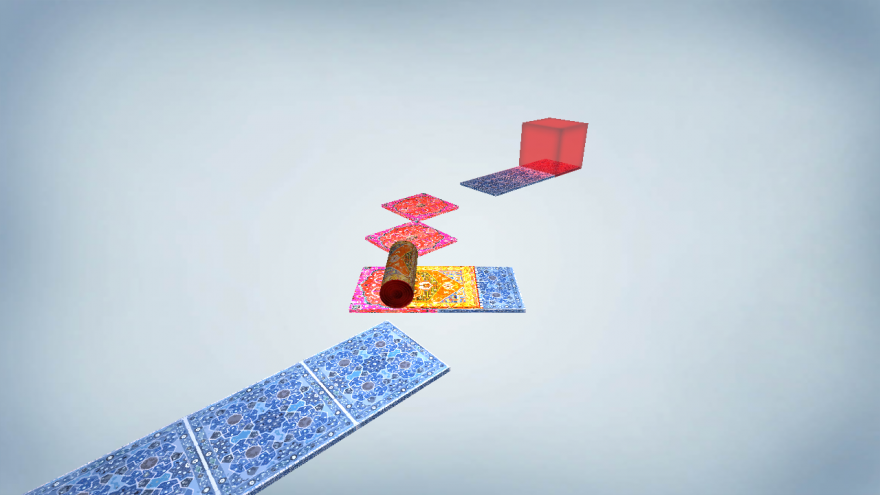 With our spinning jennies and textile mills and industry, the ancient Iranian craft of carpet weaving, which dates back some 2,500 years, is one that is lost to much of the modern world. Yet these luxurious woolen rugs with symmetrical patterns and paisley motifs are the subject of the devious Farsh (Iranian for carpet), which was recently selected as a finalist in the Independent Games Festival’s student competition.

A thoughtful puzzler with an exotic twist, Farsh has the player rolling and unrolling a bright arabesque fabric while a sultry zither resounds from the speakers.

However, because of strict U.S. visa policies, the game’s creator, the twenty-year-old Iranian Mahdi Bahrami, might not be able to travel to San Francisco in March when the awards are handed out. “Most of the applications from Iranian people who want to travel to the U.S. are rejected,” he says. “In most cases, you can’t do it. I need to prove that this is something big and important.”

Despite perhaps not being there himself, Bahrami feels honored by the nomination. He was sitting anxiously in front of his computer, refreshing the webpage, when the news hit. “Suddenly, my phone rang and my friend was so happy, saying congratulations! and then on Facebook, Twitter, emails,” he says. Just don’t suspect that the young Iranian had a late night celebrating in Breda, the quaint, Dutch town with roots in antiquity where he currently attends school. “I tried going to clubs with my friends but didn’t really like it,” he tells me. “Beer or wine… I really don’t like them.”

Bahrami seems more than happy to make games in a peaceful country far away from international controversy. He was born and grew up in Esfahan, one of the most exotic oriental cities in Iran, but also the site of a Uranium Conversion Facility, which converts yellowcake into nuclear fuel.

“When I made the game, I was thinking, ‘Why not present this game to my mother as a gift?”

Despite the alarming situation back home, being away from home is being away from home. He naturally has a touch of homesickness, and he made Farsh both as a tribute to his family and his culture. “When I made the game, I was thinking, ‘Why not present this game to my mother as a gift?’ because she weaved carpets when she was young,” Bahrami says. “I know weaving carpets is a difficult job. It might take two years just for one carpet.”

His mother was elated with the gesture. At the time, Bahrami hadn’t seen his family in five months. He tells me that his mother was saying over the phone, “‘Oh my god! Thanks!’” One is tempted to conclude that, by making his colorful, carpet-themed puzzle game, Bahrami is carrying on the tradition of carpet weaving into the computer age. But that would be a mistake. He tells me carpet weaving is much more intricate and difficult. “Farsh was made in two weeks, and compared to weaving a carpet, it was really nothing,” he says.