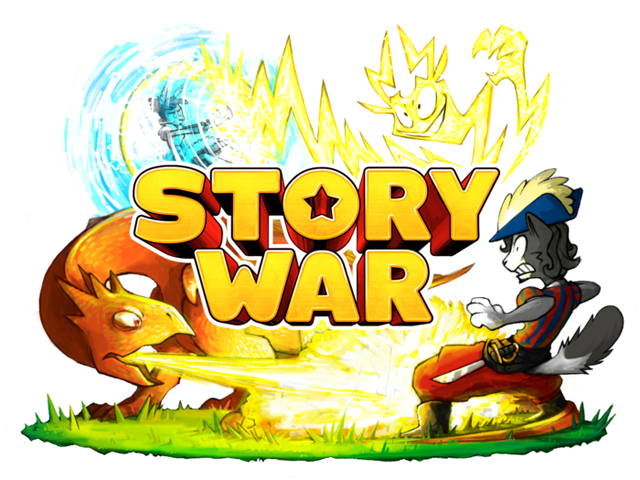 Story War, a story-driven card game, sheds numbers and stats in favor of tall tales. Created by Brad O’Farrell and Tom McClean, teams use their imagination, and knowledge of pop culture, to make up stories based on random and calculated cards laid out on the table. The team with the best, or logical, or funniest story, as awarded by the judge, wins.

The basic pack includes 100 cards with plans for 100 more expansion cards if Kickstarter stretch goals are met. Cards range from battlefields: Sky Port, Lunar Colony, and a Mystery Mansion to characters: a mermaid, a sky whale, and a doppelganger (it has the power to look like anything it wants – except itself!). Players can also use item cards like a shrink ray or the Philosopher’s Stone to aid their stories. Along with the standard rules, there are plans of additional game modes and an online multiplayer client, again, if the team meets their stretch goals.

Built for diversity, O’Farrell and McClean noticed trends in storytelling strategy based on a player’s age, hobbies, and occupation:

As a father, and a writer, my appreciation for a game like this lies in the environment it creates to tell stories. As they grow older, I want my children to use their imagination and not be trapped by logic (a sound tool their father profusely uses to win arguments). What close-minded scientist declared that if you see an alternate version of yourself while time traveling that all is lost? Maybe we can use this to our advantage? A game like Story War fosters these types of open-ended discussion.

For future family adventures, I anticipate an epic amount of  long car rides tangled with the sounds of kids playing Story War in the back seat to pass the time. However, with a revolving judge, it might be hard to persuade my children that, in fact, a mermaid is allowed to marry a vampire without having parent-child discussions I was hoping to hold off on until later.