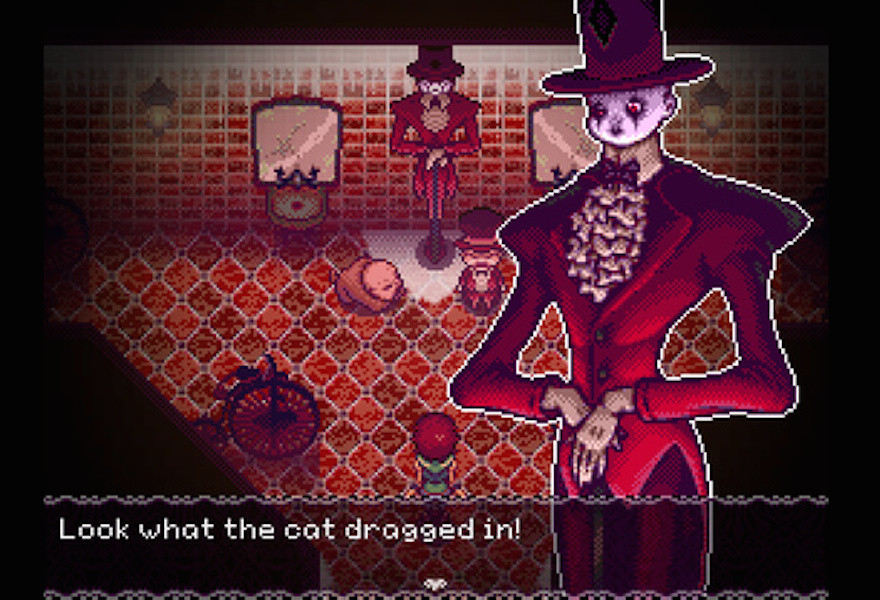 With the advent of let’s play channels and indie development, the horror genre has been on something of an upswing. Indie games such as Amnesia: The Dark Descent, Slender: The Awakening, and Five Nights at Freddy’s have become full-on sensations, spurred on by the vicarious joy viewers get from watching their favorite YouTubers flee in terror from virtual monsters. Each of these titles feature a first-person perspective and realistic environments, which frighten through immersion and make the player feel as if their own world has become a nightmare.

Stray Cat Crossing is a different kind of horror game. With a top-down, sprite based experience focused more on solving puzzles than running away from monsters, one would be forgiven for assuming Stray Cat Crossing were an action-adventure game along the lines of Zelda, but to do so would be to miss a truly unsettling atmosphere. Whereas games like Amnesia seek to frighten by plopping the player into a realistically rendered haunted house filled with various enemies, Stray Cat Crossing hopes instead to create an entirely new surreal world which unnerves through unconventional graphics and uncanny character design. Resembling a twisted version of Studio Ghibli or perhaps some of the weirder moments in Atlus’ Persona series, Stray Cat Crossing features maggots with human faces, human women with goat heads, creepy and oddly-proportioned babies in suits, and other sights designed to immerse through sheer curiosity.

During the game’s animated cutscenes, these outlandish designs resemble something like whimsy turned on its head—what one might see in a children’s storybook after staying up for 72 hours straight. If Amnesia uses realistic graphics to make its horrors more believable, then Stray Cat Crossing uses stylized graphics to make the player question their own sense of reality.

With the full release coming to Steam on August 28th, you can get spirited away to this bizarre new world by playing the free demo available now.