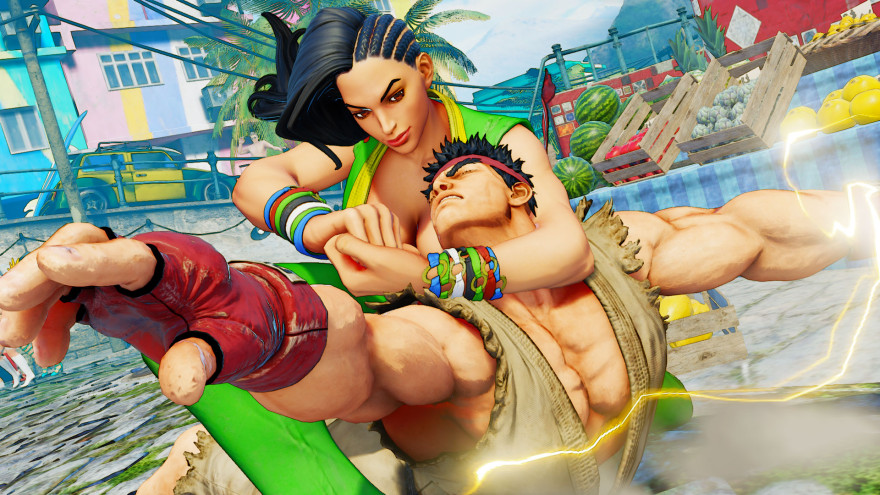 “ANOTHER FIGHT IS COMING YOUR WAY!”

This is the siren sound of a Street Fighter match: two people getting ready to know each other without ever meeting. No matter how you dress it, Street Fighter V is an intimate experience dispersed globally. This Street Fighter has the distinction of a purely at-home experience: no more arcade machines produced, no more gangly crowds growing around the electric glow of a single screen in the dark and suspiciously meaty atmosphere of the local arcade. There’s no limit to the kvetching about a dearth of release features, either in reviews, at forums, or on Twitter, but the Street Fighter V experience at the moment isn’t so much low-featured as it is pure: a conduit in which you and one other person meet and do battle. Instead of putting a quarter up there on the machine, you’re setting your match experience up like a personal ad and then plinking away at an unsatisfying computer-controlled partner while you wait, practicing your combos, your specials, your opening line.

Street Fighter V has traded a physical space for the intimacy of a digital one: an internet meeting with a mysterious stranger. When a match announces itself, loudly, it’s impossible to not get excited. And suddenly, you’re fighting: you, some anonymous other, and the small, limited locale in which you’ve agreed to meet. To begin, your characters shout, insult, and taunt in giddy eagerness, and then suddenly a silence among punches, kicks, and desperate concentration.

one’s sheer force of will eventually wins out

Street Fighter V rounds rarely take the full 99 seconds they’re allotted. It feels like an eternity. Even here, in a game that feels slower than its forefather, rounds tend to go only 20 to 30 seconds before somebody is exhausted, face-down in the glorious mud. Though the length varies, it always begins the same: a flurry of tests on the part of each entrant, trying to see what a stranger is all about. In the first five seconds, you learn how they like to open a conversation. You learn how they respond in the pressure cooker of a blind date. Most matches open with a salvo of fireballs, or plasmaballs, or whatever—the life-energy of two individuals meeting between them, fusing into one, and then dissipating into nothingness.

As in staring contests, or a mind battle in Cronenberg’s Scanners (1981), one’s sheer force of will eventually wins out. Their fingers flow smoother over the buttons and the fireballs meet closer, and closer, and closer, until the round opens up into a series of pokes, specials, combos, and blocks. It’s here that you get to know each other: you poke at their hard, antisocial exterior with punches and kicks of varying strengths and lengths, meeting either the resistance of a block or the soft interior of an opening. If it’s the latter, you press on, trying to lay as much damage on them before they’re able to recover.

They always do. Unsuccessful combos are plentiful, the results of a brand new language that new and old players alike are desperately trying to learn. The game is once again loose on instruction: this is trial by fire, learning by immersion. My surprise at the inclusion of a basic introductory tutorial fell away when I reached the main screen, where the only training is a computer dummy best served by those who already know what to do with it. The in-depth tutorials are already on YouTube, only this time they’re uploaded and promoted by Capcom itself. In the actual game, you’ve got a move list and a brief overview of the new features. Handy reverse attacks and character specific two-button moves that are gleefully different as they are easy to perform are among them. They hint at a future where complex directional combos might give way to the relatively simple action of pressing two buttons at the same time.

But even as the series steadfastly refuses to give priority to introductory features, Street Fighter V can feel as light as a lungful of fresh air. This latest iteration is delivered with a reduction of characters from a bloated 44 to a base 16 (which will, of course, only increase overtime). And laxer timing requirements for sequential button presses means there’s less to worry about initially, owing to more space to think, ponder, and respond. What unfolds is a delicate ballet: if one of you fails and gives an unevenly bad performance, it’ll be over too soon. You might never meet again. After waiting, a quick defeat or victory is just as deflating on either side.

But the matches that do last feel as though they could go on forever. These are the matches that take up the full time limit, and almost always go to the third tie-breaking round. These are the even matches, where the game has succeeded in introducing you to your fighting game soul mate, so that you might learn each other’s habits and fears and aspirations over the course of three 99-second dances. Your digital bodies float around each other, pushing the limits of contact. By the third round, you know each other well, and what follows is a perfect minute and a half where you both feel like superstars on the grand stage at a big tournament, the unnamed masses cheering behind you.

And then it’s over. You forgot your words, got nervous, put in an uppercut when you should have blocked and got punished for it, just like you always do. A defeat screen pops up and then you’re back by yourself, across from a lifeless computer player, once more alone and attempting to console your broken ego by beating up a training dummy.

This time, you’ll remember not to uppercut immediately when you get up. You’ll play it cool; let them do all the talking before you pull out an appropriate response. You’ll block accordingly. You won’t let yourself get swept off your feet. You pick a new character and edit your profile:

Looking for: Casual—no ranked. PC and PS4. Good connections only.

“ANOTHER FIGHT IS COMING YOUR WAY!”