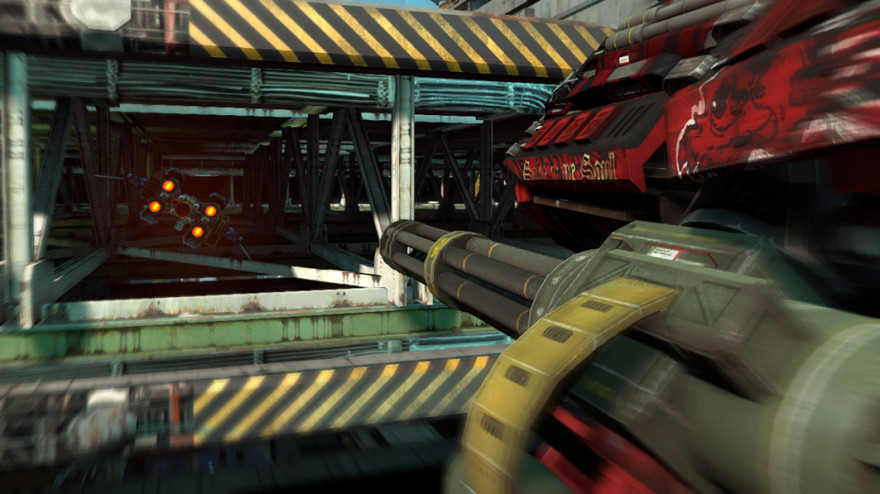 Driving is the worst. The unofficial racetrack of life, itself couched in a matryoshka doll of analogies, is a place where everyone is your enemy and no one is safe. Your life is at risk regardless of your adherence to the rules. I’m in constant awareness of being the sole pilot of a few tons of metal hurtling around at deadly speeds, as is everyone around me, and I can’t verify their capacity to command the vehicle. I fully expect to die every time I get on the freeway.

Strike Vector thrives on this anxiety, which may be a thrill for most. An arena shooter that pulls from a variety of sources, in my mind this game mostly puts me on the interstate, surrounded by killers who are now armed with a multitude of weapons in exponentially large combinations. My initial hours of experience were primarily concerned with crashing, which happens a lot. You’re behind the stick in a ship that can also swing down a set of legs, with two weapons and a perk, and thrown into a veritable 3D parking lot of mayhem.

Mostly it’s a game long on nuance but short on direction, which should serve the WASD crowd just fine. Your non-aesthetic options aren’t terribly vast but within those, mostly in regard to weapons, the loadout is what makes the player. If you are unfamiliar with these terms or ideas, and were drawn to this game for its milky blue skies and almost painterly mechs, then I fear for you, as I do the permitted learner first venturing past an on-ramp. You will be slaughtered, though it won’t be without little joys.

To zip from end to end on the map, lose track of the horizon, and wind around the various architectural effluence blasting at you is a terrifying thrill. There is great Oculus Rift potential (and relevant motion sickness) in Strike Vector; it does a solid job of utilizing the feeling of flight without getting bogged down in the particulars of applied physics. And if flying becomes too much for you, you have the Macross option of slipping into robot mode, which may seem tactically suspect at first. As a jet, moving quickly across the map puts you on enemy radars, but robot mode is more stealthy and radar-adverse. Part and parcel in stealth is slower movement, so it’s best not to transform without cover, but the option upgrades this game to Star Fox 64 with sniping.

To a certain sort of person, that will be the greatest proposition on the planet. This game is for that person. There’s a curve here; as in most games of Strike Vector’s ilk, your blind spot will be your undoing. Go too long without checking it and at best you’ll get a rude gesture, worst will find you busted up pretty hard. Being a bit rubbish at keyboard and mouse, I was rarely without someone’s reticle on my rear, and in any given match it was highly unlikely that I would, you know, kill anyone. Even when I did those points were promptly negated by a crash.

All of which isn’t to say I didn’t have fun; every death teaches something. But, like I said, this is a game for a particular type of person. The nine-person team (initially four) over at Ragequit have crafted a formidable deathmatch contender, one that looks gorgeous and feels remarkably physical. But Strike Vector will not hold your hand or really clue you in on anything; all that physicality and beauty will be used to show you spiraling out of control and into some floating oil tanker. Some of the Parisian team’s English is spotty but even so, there’s no point in fixing it. You can read about the interstate all day long, but you won’t learn to merge until you get out there.