That’s the conclusion reached by a University of Michigan study published in the January issue of Psychology of Violence:

[Researchers] Saleem and Anderson recruited 204 participants, randomly assigning them to play one of three video games for 30 minutes. Two of the games were versions of “Counter-Strike,” one with Arab terrorists and the other with Russian terrorists. The third game was a nonviolent golf game.

The standard tests showed that playing violent video games, even those featuring Russians as terrorists, increased anti-Arab attitudes. And the drawing test showed the same effect. Participants who played a terrorism-themed video game were more likely than those who played the golf game to draw Arabs with stereotypical traits and Arab men with weapons and angry expressions on their faces.

A sample drawing from the study: 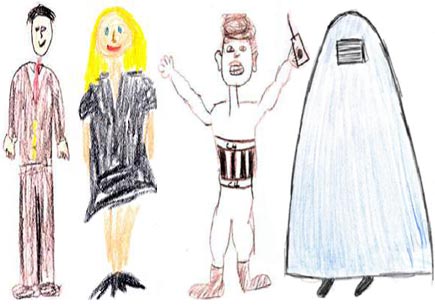