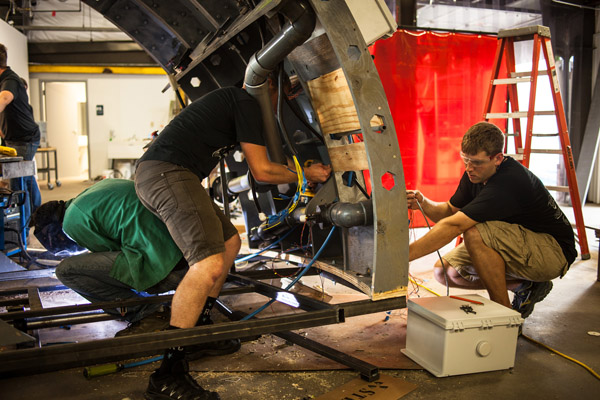 Plunging us deeper into the abyss of bloodless simulacrum, this sketch-up designed submarine offers its crew all the thrilling, claustrophobic anxiety of submarine warfare, except everything that’s not fun about submarine warfare. Metaphorical blip on radar: they’ve volunteered to become the target of Twitter.

One of the events is if enough people tweet #firetorpedo while the game is in play, red lights start flashing and warning sounds go off letting you know a torpedo has been launched (you can even see the torpedo incoming on the LCD radar screen). You get a voice command telling you what you need to do to evade (press buttons in a certain order, pull handles, or crank valves). If you are too slow, you will get hit, the whole sub will rock, and a bunch of valves will break. You will then have to close them manually. We use an Arduino Ethernet to communicate with Twitter, and an Adafruit Wave Shield to take care of the sound effects.

And what else could it be for then the Red Bull Creation Contest? We’ll salute Team 1.21 Jigawatts, but does will we ever get to play it? The Navy, Disneyworld, and the Science and Industry Museum may already be after them.