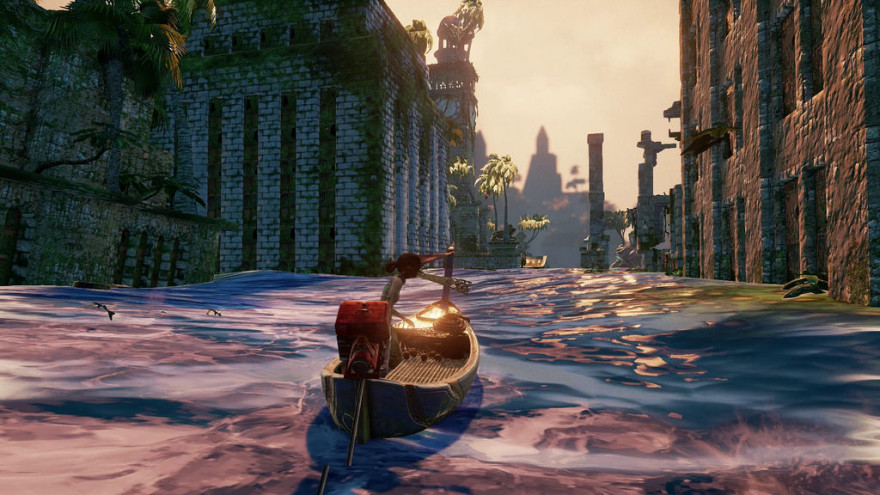 The closest thing to a legendary ruin near Cheyenne was a lot in the country called Sarahville. Also known as “Dinosaur Acres,” it hosted a lawn full of once-wildly painted cartoon caricature busts and jurassic statues, decaying into a Darger-esque hellscape. Rumor held that a grief-stricken father sculpted these for his dying child, the loss of which was too much to bear, tossing him into the waves of madness. But in person it was just a crumbling yard, with a few creeps only in low light, yielding no truth. Dino Acres was eventually razed, surviving only in memories and photos found in local yearbooks and high school lit mags. A failed monument, too small, too weathered, too quiet.

a failure as both game and commentary

Submerged is a short game attempting to ruminate on this kind of collapse and decay, but is itself a failure as both game and commentary. It’s a Thomas Kinkade painting or cowboy poetry, pleasant and well-enough constructed, hitting the inoffensive worn beats, but ultimately thin and toothless. Submerged is attempting to split the difference between disaster tourism and cognition-engaging action, but in doing so has Solomon’d the baby, satisfying neither imperative.

The player controls Miku, a young woman sailing with her brother Taku, who has a grisly wound across his stomach. The pair arrives at the unnamed, mostly underwater city, setting up camp in a clocktower. Buildings loom, some frozen in mid-construction, steeped in decay but crawling with palm trees and glowing aquatic plants. It’s just you cruising your skiff, casually scaling facades to find supplies conveniently left lingering.

The city of Submerged is a ruin, a watery broth to which little meat was added. Its citizens were unprepared for whatever brought the cataclysm and none survived. Warnings, if offered, don’t appear to have been heeded. Movie billboards and exposed steelwork implies denial or ignorance on part of the inhabitants, and as such, the upper floors are all that remains. This city deserved to be destroyed, and while it is not offensive and there are occasional pleasing vistas from which you can take a “postcard” at the pause menu, the sights are few and familiar and uninspired. No interiors are explored and doors will never open, unless a building has been completely gutted and cracked open to the world. The city feels under-baked, raw, unchronicled.

So, too, do the actions you can take within it. Most of what you interact with is cold stone, decorated with mossy gargoyles and ferns. Miku climbs and sails and that’s it, but even these activities feel false. Your boat is floaty, more swung around by an invisible child at bathtime than the physical forces of nature. There is one movement speed which manages to always be wrong, too fast for nuance and too slow to cross a balcony in satisfactory time. She climbs with deliberation borne of unending superhuman strength, and will never crash or fall, negating any possible tension. Taku won’t die if you take too long, and while Miku appears to be afflicted by some mysterious disease as she travels, the resolution of this is finely flat with no character development behind it.

This city deserved to be destroyed

An interesting comparison can be drawn to the game’s contemporary, Everybody’s Gone to the Rapture, which was maligned for not having collectibles or the ability to run—well, there are plenty of those in Submerged. However, their inclusion here is as much a non-element as their absence from Rapture and the so-called “walking simulators.” Collecting tomes and boat upgrades is a repetitive, jittery chore. Miku has a telescope to take in the view, but items of value are automatically pointed out and remembered on the map. You don’t have to engage and it’s quickly apparent that every view is the same: palm trees and concrete scaffolding. Some animals bound around—glowing barnacled dolphins and whales, lifeless birds, and eventually, some mermen. But you simply run into and through them so often that their presence loses luster quickly. This dead world is regrowing but it’s not for you.

The city’s tale is told mostly without words through scattered books, and the siblings’ history is spooned wordlessly to the player in paneled tercets as you find emergency supplies. Misfortune crashed down and the adults were predictably human, unable or unwilling to process grief, leaving two children alone to fend for themselves on the water. A family that has disintegrated in predictable, perennial ways. An occasional piano rises out of the din of brief storms and lapping water, but it’s played seemingly at random, or is at least mismatched Miku’s obvious inability to fail.

Submerged is skeletal and unoiled. It is damned by competence: a short story that checks the boxes, but in doing so leaves no mark. I fell asleep twice while playing it, shaken awake by Miku’s worsening cough, just looking to fix up Taku and motorboat out as fast as possible. It’s a game that has no ambition and says nothing, and through that, quietly stumbles, erodes, and disappears, leaving no impression, no haunting memories.