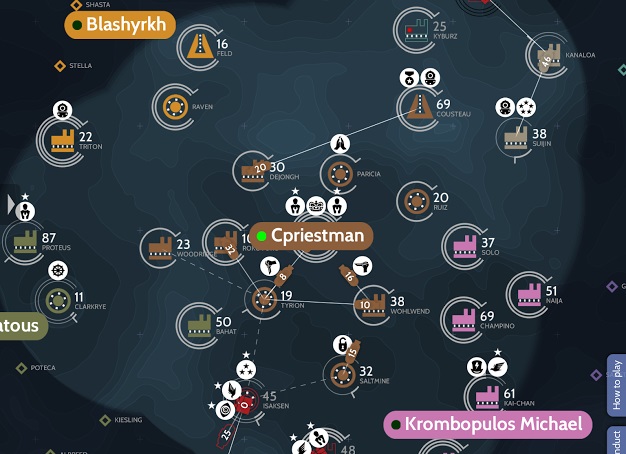 Subterfuge has emerged in my life as a paradox. It has got me playing the single longest-running multiplayer match of anything I’ve ever been involved with—we’re currently seven days in, and a victory is still four days away. Yet, I am barely invested in it, only making a couple of moves every 10 to 12 hours, if that. It takes all of, I dunno, five minutes out of my day.

We wrote about the idea of “human-centered game design” last year, mostly due to David O’Reilly’s Mountain. It’s a game in which not a lot happens. You watch over your own personal mountain as it hovers amid a void. Sometimes top hats and padlocks crash into it. You’re asked only to check up on it every now and then. Like a virtual pet, the mountain enjoys your company, speaks to you, relishes the lullabies you play it. And if there were any qualms as to whether it was a game or not, Mountain does have a fail state—your grassy knoll can die.

made to fit around your life

Subterfuge has been made with the same sensibilities as Mountain. Its designers, Ron Carmel and Noel Llopis, are both recent parents and wanted a strategy game they could play in between clearing up sick and changing diapers. It’s made to fit around your life rather than demanding you sacrifice social activities and personal time to its virtual altar.

This is nothing new for mobile games. Angry Birds and Clash of Clans have been made to play while waiting at bus stops or in transit on the tube. What Subterfuge does is combine the brevity of those playing sessions with the knotty politics of, specifically, PC strategy game Neptune’s Pride. As such, Subterfuge is an eight player game in which you vie to overtake each other’s outposts through military might and diplomacy. You win either by being the only player with their queen left intact or by digging up 200 kilos of Neptunium. Typically, the latter is the way matches are settled. You acquire drillers, create a mine, and defend vigorously while slowly generating the mineral.

Carmel tells me how he became almost unhealthily obsessed with Neptune’s Pride. “I remember eating dinner with my wife, and saying that we need to hurry up as I need to be home by 7:15pm so I can launch that spaceship that will take over that system,” he says. It’s this type of behavior that he wanted Subterfuge to avoid encouraging entirely (especially as he no longer has time for it). This is why Subterfuge has the Time Machine.

It allows you to scrub into the future where you can see how events will play out based on the information you have in the present. You can also launch submarines while peering into the future. However, if you’ve downloaded the game for free, you can only make four moves at a time. Subterfuge‘s payment model is quite cleverly based on letting you pay for convenience. Hand over $9.99 and you can make as many moves as you like while using the Time Machine.

There’s no real tactical advantage to using the Time Machine in this way. In fact, overusing it will likely end up in a bad result for you due to the situation changing over time and your pre-planned strategy being unable to match it. What the Time Machine does allow is for you to spend longer away from the game while still making all the moves you need to.

This is only one of the ways that Subterfuge has been designed around accessibility. Now, I know this isn’t one of the words that springs to mind when looking at a screenshot of Subterfuge. It’s all moving lines, submarines, and numbers; a fluid cartography. That can be intimidating. But what you soon realize is that none of this is where the game is truly played. That crown belongs to a text box.

As seen in the trailer above, Subterfuge has a strong social element to it: you can type out messages to any of the other players. While you have to wait upwards of 12 hours for submarines to reach their destination, you can arrange temporary truces, to gift units to your ally, or to gang up on another player at any time (even if you’re in different time zones). The catch is that this is all-against-all, and so trusting anyone can a mistake, as people will lie and betray you to get the upper hand.

You have to take these risks if you wish to survive. The limited sonar range of your outposts means information is a precious resource but only the other players spread across the map that can give it to you. But how can you trust them? This ambiguity is where Subterfuge becomes utterly compelling. It is what has kept me eager to check up on it daily for over a week. But, more importantly, it’s a commitment that hasn’t made me miss out on anything else in life.

You can download Subterfuge for free on the App Store and Google Play. Find out more about it (including its rule book) on its website.