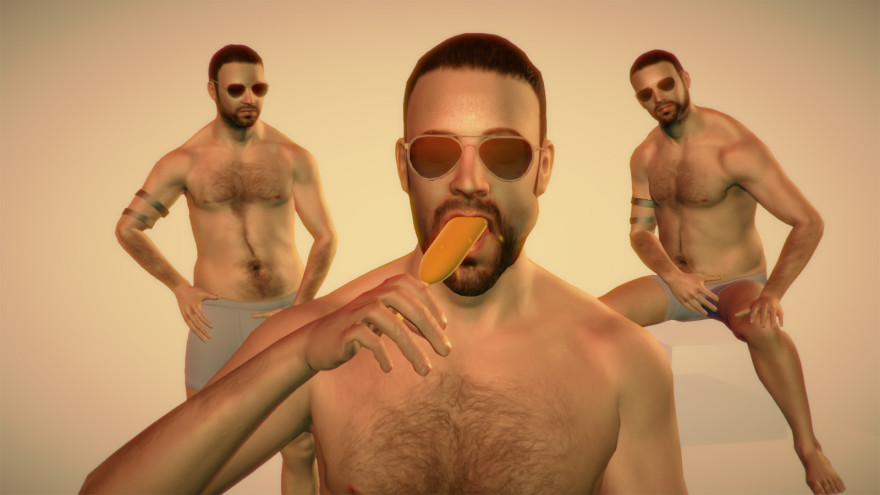 Like I said, the man’s up there in the running for most unconventional NPC lifestyle.

“An emphasis on certain masculine bodies to model for the entirety of a community.”

Both Hurt Me Plenty and the more recent Succulent are part of a larger family of projects Robert’s been developing for the Different Games Conference. While the recycling of his beefcake character model might’ve initially arisen from financial/time constraints, the necessity ended up leading him down an unexpected (but relevant) social commentary path. According to his blog, he discovered “an ideology my recent gay games have been replicating through their heavy asset reuse of the sole character mesh I commissioned; an emphasis on certain masculine bodies to model for the entirety of a community.”

Imitating the visual sensibilities of “homo hop” music videos, the backup dancer clones in Succulent border on the line between “sexy thug” and “sociopathic demon creature.” Stoic in their beefcakey-ness at first, the clones nod their heads and stroke their man bits, emulating the go-go boy gay club / pin-up imagery which Robert describes as “thoroughly ingrained in US gay male culture.” But quickly, players learn the high price of possessing this kind of hypersexualized mass appeal.

As a gay man of color, Robert explains further on in the blog that he’s only too aware of the homogenized representations of homosexuality so prevalent in mainstream culture. “The vast majority of gay men depicted in media are white and masculine, and if you don’t fit in then you get erased within your own community.” To communicate the sense of brain washing that comes with this kind of homogenizing, Robert utilized one of videogames’ most distinctive (and avoided) features: the uncanny valley. By giving his beefcake a black, sightless gaze, the game transformed from innocuously ridiculous blow-job simulator to a nightmarish hellscape. “And why shouldn’t it be a little creepy” Robert asks, “this idea of gay men fitting into this homogeneous skin color and body type and hair cut, of endless copies?”

Gay culture still seems to remain in the rut of fashionable sameness.

Other than adding to the general wackiness of the experience, the backup clones of Succulent comment on the “Castro clones” phenomenon, which was the label people gave to a district of gay men in San Francisco in the 70s who all dressed and looked the same. Now, over forty years later, gay culture still seems to remain in the rut of fashionable sameness. “How can this possibly be the ‘liberation’ we were promised?” Robert questions. “For many queer-identifying men, this monoculture feels stifling and we feel compelled to try to escape and seek alternate spaces.”

But by the end of Succulent, sex is the last thing on the player’s mind. Finishing the game with a final blow to the Queer as Folk, consumer-driven lifestyle he sees as so prevalent in the media representations of homosexuality, Robert explains that “after consuming the carrot/popsicle/corn dog and hypnotizing you, [the character] has nothing left to feed upon, so he reveals his demonic nature and proceeds to consume you.”

Succulent is available for your consuming needs on Windows, Mac, and Linux for free. You can keep up with videogames’ most unconventional photorealistic NPC through Robert’s blog and Twitter.