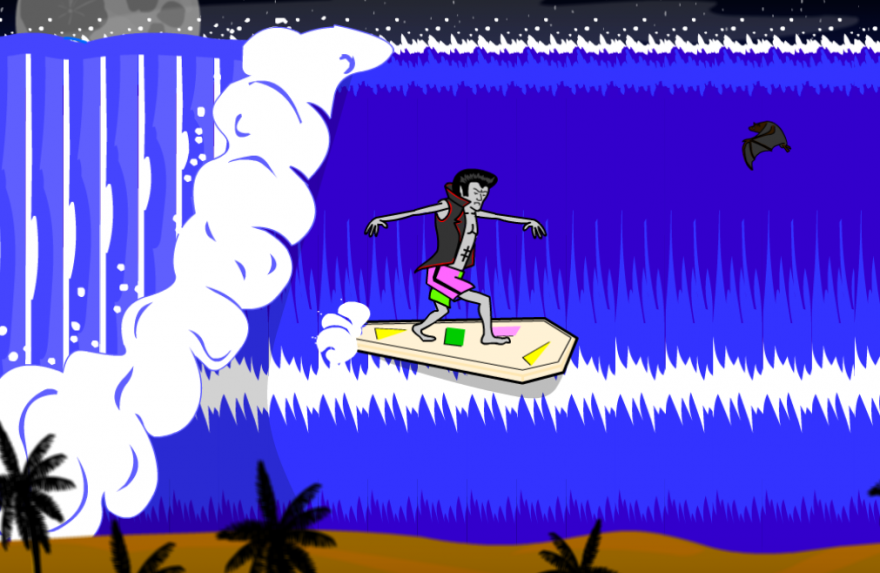 For a character who has already died, Dracula sure is a chill dude. In Hotel Transylvania, the 2012 children’s movie that has a sequel coming out this month, Dracula is clumsily adjusting to domesticity. In Mel Brooks’ 1995 parody of traditional vampire stories, Dracula: Dead and Loving It, Dracula is…well…dead and loving it. All of this is a world away from Bram Stoker’s 19th century horror novel.

But none of those interpretations are as far from Count Dracula’s origin story than Beardo Games’ Surf Monster, a game in which the famous vampire goes surfing. Seriously. That’s the elevator pitch.

There he is, Count Dracula, coiffed like Elvis and awkwardly perched atop a surfboard. Classic tunes play in the background. Bats fly through the sky, because of course bats would be flying through the sky.  You, the player, control Dracula through your keyboard, directing him to and fro in pursuit of a big wave. The longer Count Dracula can stay afloat, the higher the player’s score. In addition to the normal challenges of surfing—namely, it’s hard to keep your balance on a small piece of Styrofoam while out at sea—Dracula must carve the waves in a manner that avoids collisions with bats. As in real life, surfing into a bat at full speed never ends well in Surf Monster.

surfing into a bat at full speed never ends well

Dracula: He’s just like the rest of us. That’s good news for Dracula. Well, maybe it is, people are weird. But at the point where Dracula is just a pale guy with an Elvis haircut, is he still Dracula? How different does the embodiment of difference really have to be? Surf Monster hints at Dracula’s inner life. There’s a bog-standard beach bum trying to escape from beneath his cape. This is that alter ego’s moment in the sun. Good for him. He may be killing Dracula—or at least his mythos—in the process but at least he’s happy. Now that the undead are all over our cineplexes, televisions, and games, some of them might as well get to have some fun.