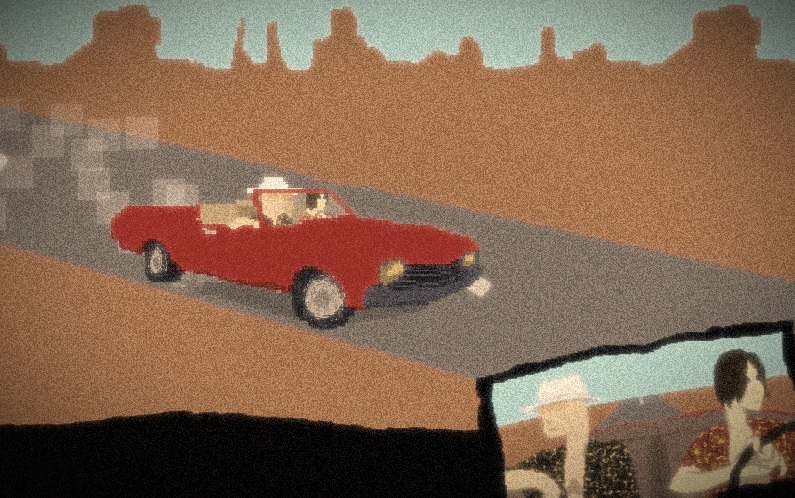 The screen is fuzzy. A red Chevrolet Caprice convertible is casually bowling between the vast dustlands of the along a streak of black, sun-hot tarmac. In a loose, flowery black shirt, large yellow sunglasses, and a floppy white sun hat, Raoul Duke gnaws on a cigarette holder, arm leaning on the passenger side door. Dr. Gonzo, Duke’s attorney, sits in the driver’s seat, open-shirt belly, gripping the steering wheel tight between his pinkies.

If you’ve read Fear and Loathing in , or watched Terry Gilliam’s film adaptation, that scene will be familiar. Hunter S. Thompson’s semi-autobiographical novel sways between a disdain for countercultural attitudes of the 1960s, and lurid depictions of heavy drug use and the hallucinations and blackouts it causes.

Although The Sun Does Not Exist is based on these characters and their strange trip to , developer Da Neel Games makes no allusions to it, describing the game as “something like very bad and strange Silent Hill but without monsters.” As such, it wavers between a very loose adaptation of a snippet of Fear and Loathing, and a short but memorable fan fiction that misses the meaning behind the madness.

There’s none of the biting criticism of the American Dream, of the post-Vietnam US, or the pot-smoking hippies. Instead, The Sun Does Not Exist reduces Fear and Loathing to its most iconic images: Bat country, a red car cruising the desert roads, the outrageous shirts, a drug-induced state between reality and fiction.

Its finest moments are the developer’s pit-stop elaborations. The Chevrolet runs out of fuel and so you must guide Gonzo into a silent motel. Inside is a corridor with doors that warp over the walls and ceilings; they’re either locked or the handle is out of reach.

Inside one dark room, turning on the light switch causes Gonzo to say, “An empty room.” But there it is: A giant silhouetted face, blinking, staring right at him. He ignores it. It’s the mescaline, right? The naked corpse of a young woman in the next room—a gun in her limp hand—gives you doubts. A few seconds later and Gonzo falls over his own feet as canned laughter cuts through the creepiness the motel sustains. You might feel a nervous giggle escape you.

The Sun Does Not Exist captures the inane, psychoactive journey of Duke and Gonzo with aplomb. It does, however, reduce the novel to delighting in the very thing it criticizes. But its mixture of the unnerving and amusing is easily appreciated in its own right. To not see that you’d have to be as blind as Gonzo after he meets the shopkeeper shark in the woods.

You can play The Sun Does Not Exist for free in your browser on Game Jolt.