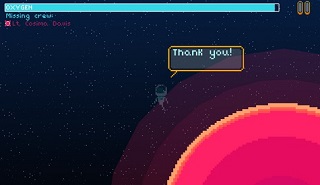 In her TED Talk about the celebration of death in Indonesian culture, anthropologist Kelli Swazey questioned western society’s obsession with labeling death as a stage entirely different from living. She instead suggested that “if we could expand our definition of death to encompass life, we could experience death as part of life and perhaps face death with something other than fear.”

Sunburn does exactly that. It turns the western notion of death on its head and makes it a whimsical, comical event that also saves an entire crew from wandering alone in the dark depths of outer space.

The iOS puzzle game comes with one simple objective: Find your crewmates after separating from your wrecked ship and jump into the sun together. Because if you’re going to die in the vast nothingness that is space, you should at least die with a few friends.

Yes, this may sound painfully morbid, especially considering how most games consider a character’s death to be a fail state, but if we follow Swazey’s guidance, then this group of space explores are not delaying death in space because they fear it; it’s a necessary part of life that brings them all together, happy, safe and sound in the afterlife.

In Sunburn, death is not meant to be a solitary act, but a celebration of the wonders death brings us.