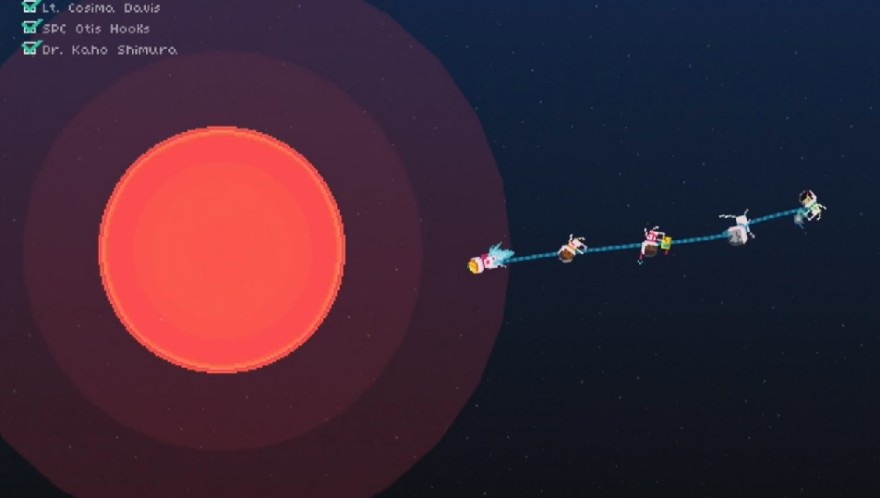 “That wasn’t so bad…” remarks the wailing ghost of Dr. Tim Brody.

Brody has just died. He plummeted into a red-hot sun. But he’s cool with it, as his astronaut crew died alongside him in the same manner, and now they ascend as a single spectral commodity toward whatever the afterlife has readied for them.

It’s unusual for a videogame to accept death as positively as Sunburn does. You’re the Captain of a space crew that lost their ship to an asteroid collision, and are therefore without a way to return home. And so this crew conclude that dying together at their own command, rather than alone and at the behest of their oxygen supply, is the better of two options. So you jump and jetpack between planets to tether the crew together before making the final jump into a fiery star. There’s a satisfying thud, drawn out by a slight pause, every time a body collides with the sun’s surface, like repeatedly slamming a car door, giving it a feeling you want to repeat.

embracing death as the only way to move forward.

Again, this is unusual. Typically, death is the ultimate fail state in videogames. It means you have to try again from a previous checkpoint with your prior mistakes erased but still in mind. Or, in less generous designs, you have to restart the journey over again due to the hard rules of permadeath.

Most games pretend that your moribund mistakes never happened by completely rewinding time (Prince of Persia: Sands of Time lets players do this manually), while others build in a narrative reasoning to the repeated death and resurrection of a character, such as the undead curse of Dark Souls and Celebrimbor’s possession of Talion in Shadow of Mordor. In all cases, death is highly undesirable as it negates progression.

Sunburn contradicts this, at least conceptually, by embracing death as the only way to move forward. If most other videogames teach us about death with an existentialist cane, then Sunburn sees death as a conduit to the next stage of life; carrying a spiritualist outlook.

Playing Sunburn has me thinking about my own relationship with death as it is one that was initiated through videogames. Often, children will be allowed to keep a pet—a fish or a hamster—so that when it dies, the parents are able to school them in the concept of death. But, long before my first gerbil ever sat stiff in its cage, I had encountered death as a concept in Sonic the Hedgehog. Death to me, as a toddler, was the sound of Sonic landing on a row of spikes; an uncomfortably sharp twang that trails off into nothingness. It let me know in those formative years that dying is painful and empty.

But if I had, instead, played Sunburn as a kid, then perhaps I would have grown up without the overbearing fear of death that playing Sonic inevitably led to. Maybe I would have perceived death as the entry to the next level rather than a begrudging Game Over. And when I think about that, I am able to see the potential for videogames to encourage us towards happier ways of thinking about life and how to spend it, or at least how they can help us explore the less grim possibilities of what happens after death comes knocking.

I’m not saying that you should go jump into a sun. Just, you know, go play Sunburn and maybe you’ll worry less about what happens when The End comes.

You can purchase Sunburn for $2.99 on the App Store.