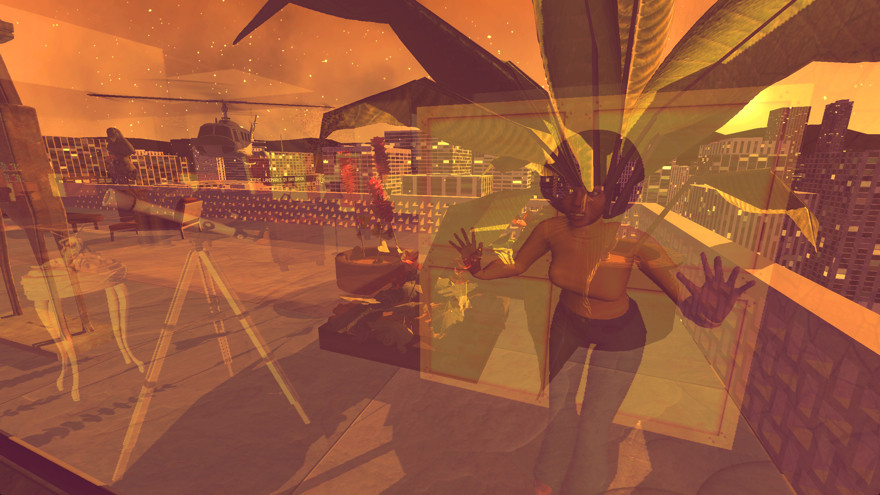 The story of a revolution is often first told from the perspective of its central characters. The stories of marginal figures are then filled in at a later date. This approach to history (or, more accurately, the making of history) prioritizes clarity over narrative breadth. Leaders in a revolution know–or believe–that they are characters in a historical story. Lesser figures, on the other hand, keep their heads down and just try to make it through each day. Their stories only get told at a later date.

Sunset, the forthcoming videogame from Tale of Tales, tells a more complicated kind of revolution story. Played in the first person, it is the story of Angela Burnes, an American who, for one hour a week, works as a housekeeper in the apartment of a man named Gabriel Ortega. Outside Ortega’s apartment in a fictional South American city, revolution gradually sells. The faces of the nations’ dictator–and, for that matter, of everyone other than Angela Burnes–are never seen. Sunset’s story is told through the choices you, as Angela make, as you navigate and clean Ortega’s apartment.

Tale of Tales’ preview of Sunset and its accompanying trailer hints at how this narrative mechanism will function. In the preview’s three scenes, the player (as Angela) wanders around Ortega’s apartment at four-month intervals, noticing the changes over time. Boxes appear, leaving one to ask what they contain and what Ortega is up to. Noises of gunfire heard out the window grow louder with time. Statues, purloined from a museum suddenly show up in Ortega’s upstairs foyer. Again: what are they doing there? Instead of telling its story with newspaper clippings, Sunset uses subtle changes in a constrained space.

The captivating imagery of Sunset’s Kickstarter campaign carries over to its preview. Ortega’s apartment is bathed in purples, oranges, and reds. In the preview’s earliest scene, when revolution is merely in the offing, one wonders whether Sunset’s eponymous skyscapes are merely beautiful or a sign that the world outside is ablaze. Later, this question doesn’t need to be asked. Ortega’s apartment is as beautiful as the view out the windows. It is replete with 70s architectural hallmarks–sunken couches, large lighting fixtures, pops of bold colour–that draw you in to its design.

The one element of Sunset’s promise that cannot be assessed from the preview is the claim that Angela Burnes’ actions affect the game’s plot. The episodic nature of the preview gives no idea of what these choices would look like. But it’s easy to imagine Angela being drawn into Ortega’s world. This is why the design of his apartment matters. It compels you to poke around and look at more than the items he asks you (as Angela) to clean. You want to see more and do more and this can only lead to choices, whatever those choices may be.

Angela Burnes will, in all likelihood, not turn out to be a major player in Sunset’s fictional revolution. Nevertheless, the changes she witnesses in Ortega’s apartment and outside its windows are the story of a revolution. As Tale of Tales fills in the gaps between the three preview scenes, this story has the potential to blossom into an antidote to the “great man” approach to history. Sunset tells the sort of story that is rarely told as major historical events happen. That is something worth looking forward to.