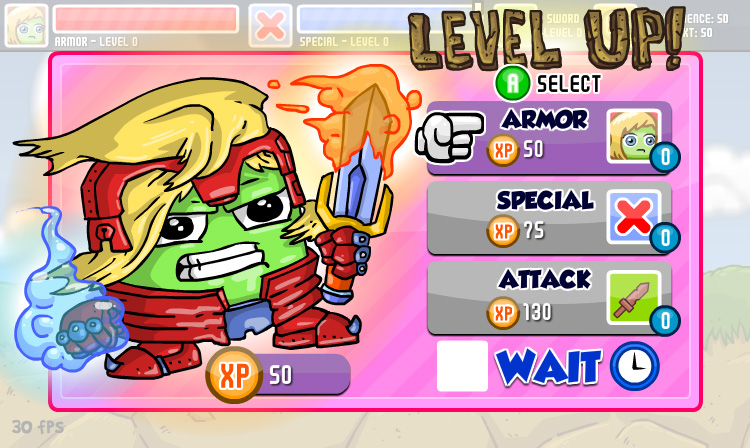 Four-year-old Bella Pasto must have thought it strange that daddy had stolen his doltish brand of entertainment for a seemingly egoistic routine. Usually, Bella was the exclusive audience to his goofy facial distortions and accompanying wailing mouth sounds. Now he was sitting alone in his office screaming “Hai-yah!” and “Wha-chow!” over and over at his computer. What was he up to? He looks so silly.

Daddy, in this case, is Nick Pasto. He makes videogames under the studio name Pesto Force, while also upholding his fatherly duties to the now eight-years-old Bella—it didn’t take long for both roles to coalesce. It started with Chibi Knight, which was released in 2010, it predating even 2011’s daddy-daughter viral hit game Sissy’s Magical Ponycorn Adventure. Nick was recording sounds for Chibi Knight while Bella watched and made fun of him. And so, as a way to humble her, Nick said “if you think you’re so good at it, why don’t you come in here and do it?!” It was perhaps an oversight to challenge a four-year-old to a face-pulling contest, but that aside, this was to be Bella’s introduction to the complicated and stressful processes of videogame production.

rather than a boy doing all the blade work, it’s Bella

Her toddler tones were so endearing that Nick ended up using them as the main sound effects in Chibi Knight. With each sword swish, Bella lets out laboured groans, while she tells you levelling up is “Awesome!” and “Sweet!” Bella’s cousins and friends at school were consequently in awe upon finding out that Bella was the star of a popular web game. And so, with that taste of fame, Bella was as enthused as Nick about returning to their collaboration when creating a sequel called Super Chibi Knight.

This time, Bella has been much more involved with the design of the game, helping to draw up concept art for the terrible monsters, and playtesting it to give feedback, as well as being the voice actress. Not everything she comes up with fits into the game in Bella’s original vision, but Nick has tried to stay true to the spirit of her ideas, and has included some of her visual style in the final designs. Bella also offers her likeness to the hero of Super Chibi Knight, who was masked by a full set of armor in the web-based original, but now starts living at home in plain clothes with her parents before setting out on a monster-slaying adventure. It’s an archetypal monomyth except, rather than a boy doing all the blade work, it’s Bella, or a girl that she at least gives voice to.

As always, it hasn’t all been fun and games. Bella has endured the monotony and exhaustion of being sat in a recording booth, take after take, and with her father shouting in lines of encouragement: “with more feeling this time!” She has also learned that videogames are a lot of hard work to create; watching as her dad writes code, then compiles it all, then tests it, then finds bugs before trying to fix them. She’s also gone with Nick to pick up t-shirts from the printer, packaged up Kickstarter rewards spread over the living room floor, addressed envelopes, and joined him on trips to the post office to mail it all out.

“One particular thing that I learned, and impressed me about Bella, was her willingness to push through difficult and uncomfortable situations to help the final product,” Nick said. “While we were filming the Kickstarter video, it was extremely cold, windy, and raining on and off. This made filming pretty uncomfortable. During one part, she is playing on some playground equipment and the bottom of the slide had water on it that we hadn’t noticed until she splashed through it on her way down. If you know most girls, getting their rear-end wet and then going on film is a definite “no-go” situation. But Bella, trooper that she is, went through with the film shoot and just made me promise to edit out anything embarrassing afterward. Now, THAT’S commitment!”

“be more accommodating and accepting of female contributors to game making.”

Nick hopes that when Super Chibi Knight is released Bella will feel the rush of satisfaction and reward of all that hard work and determination. “She has seen that [creating videogames is] a combination of many discrete disciplines and just that distinction, I hope, will enable her to decide which things she’ll pursue career-wise in the future.”

I ask Nick if he’d be comfortable with Bella going on to create her own videogames in the future. It’s a question asked with the recent exposé of videogame culture in mind, which has brought to wider light how often women are harassed in the field, and only because they bring in their own creations and ideas, or sometimes simply for existing in that space. He’s hopeful that when Bella is more seriously deciding on her career path later in her life, that videogames and the industry and culture surrounding them will “be more accommodating and accepting of female contributors to game making.” He looks to promising statistics that prove videogames are becoming the preferred entertainment for most of the US, as well as the entire world, and those that show the number of women playing games is very close to the number of men.

“In 10 years, I have no doubt that games will be the main method of entertainment and storytelling and that the audience will be EVERYONE, man, woman, and child,” Nick said. “Hopefully that means that there will be a market and support for ALL KINDS of stories and that no one will be up-in-arms about anyone making games that fall outside of their particular taste.”

At the moment, Bella is determined to become an “authoress,” which is a job role of her own titling, as well as a book illustrator. Writing code isn’t attractive to her, but she sees herself as an artist and creator, doodling and writing with pen and paper. Nick is clearly pleased that Bella has this ambition already, and the fact that she’s developing skills that could be used for videogame production as well as many fields outside of it has him proud.

But he’s sure that what she’ll find most value in, and what will stick in her fondest memories, is the time that she’s spent with him, with her father. Being able to offer so much to his daughter—attention, love, and teaching—through his work, has been a real boon and brought them much closer.

You can purchase Super Chibi Knight on Steam Early Access and find out more about it on its website.