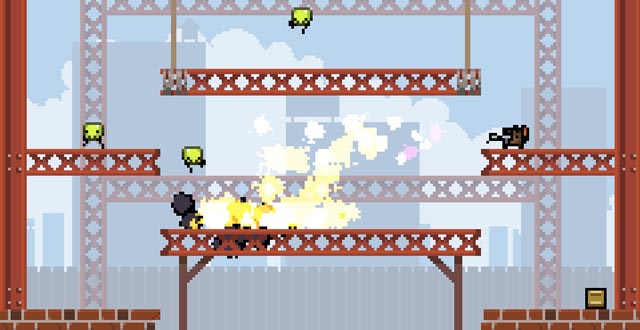 Things get out of hand quickly in Super Crate Box. It always feels unexpected. Maybe it’s because the game seems so simple: Collect crates to score points; careful around the enemies. The pixel style hints at halcyon days, and gameplay traces a direct lineage to the old Mario Bros. arcade game.

The setup bubbles over when you collect a crate. At that point, your weapon changes and a new crate appears elsewhere. And the arena can suddenly be overrun with enemies because you’ve been given a dud.

Exhibit A: the disc gun.

A pixel-high sliver cuts across the screen (and any enemy) before bouncing off the wall and coming right back at you. The disc gun is so double-edged, it comes with an apology when unlocked. On the statistics page, there’s a special category for deaths by disc. Your number will be high. And yet you use it: You have to.

Enemies pour out from the top of the map and run in straight lines to the platforms below. Any that survive and reach the flaming pits at the bottom of the arena return, faster and meaner, as you continue to collect crates. Each new point can shift the playing field dramatically, removing any solid ground afforded by the last weapon. The next crate isn’t far, but the longer you wait, the more enemies fill the screen. It feels like time and space conspire against you.

Super Crate Box doesn’t let me hesitate. Thinking too much only creates more problems. The game begs me to be reckless. I will have to use the disc gun. I will have to invite a situation that is very dangerous—in which my disc can bounce against a wall and kill me before I have time to react—in order to grab a crate that might not even make things better.

I love these chaotic moments, especially when being reckless does pay off. When I narrowly beat an enemy to a crate in order to turn and blast his face with—ohgodwhatweapondidI—a shotgun. Relief, because it could’ve been the mine with its dangerously long charge time, or the grenade launcher with its soaring arc that misses in close quarters, or that damned disc gun.

My urge to play fast and loose is countered by Super Crate Box‘s obsession with tracking score. My points unlock new weapons and new difficulty levels—new problems that are even more unrelenting. When things get too out of hand at these higher levels, even a disc gun can start to look good.