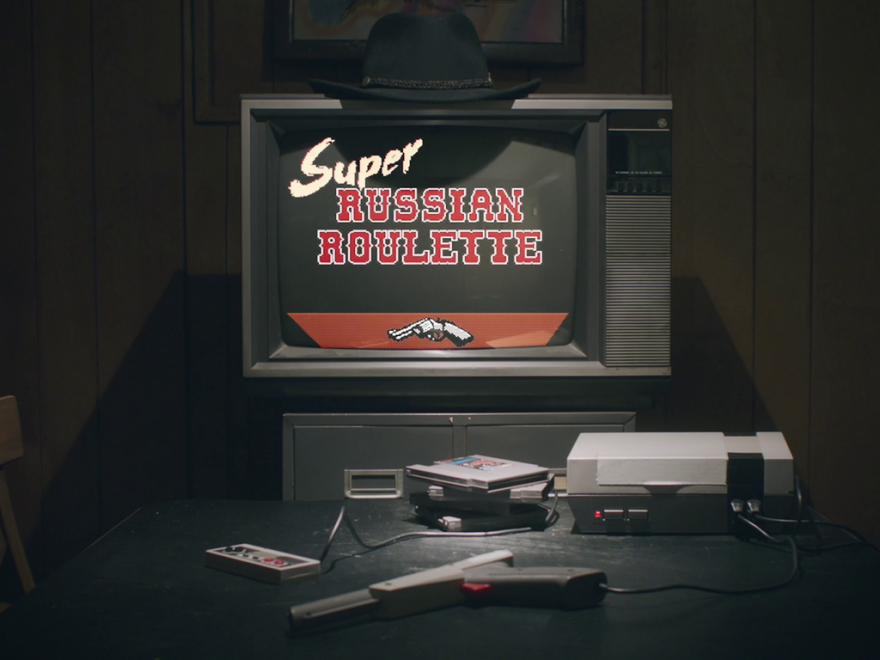 No matter how old we get the NES is seen through the same preserved lens—that of our youthful pupils. Our bodies grow hair, stretch, they wrinkle. But that classic grey plastic will remain supple for our entire life span (it will degrade slowly, over the centuries). It remains a steadfast icon for our childhoods. This may explain why there are those that want to drag the NES through the decades with them, re-purposing it, assigning new and probably less innocent memories to its cartridge slots and controllers. Perhaps this is why Super Russian Roulette exists.

It’s a subversive piece of software in its own delightful way. It asks you to take the NES Zapper—an electronic light gun most famously used with Duck Hunt (1984)—and place the end of its barrel against your temple, and pull the trigger. No one’s gonna get their brains blown out but that’s the implied stakes of this game. And right there is its striking image: a person turning the very gun on themselves that introduced millions to the thrilling violence of videogames. It used to be that videogames invited us to take arms only to enjoy the catharsis of ballistics and murder as it was directed away from us. Now it’s being pointed back the other way. The childhood console tainted by the haunt of death that creeps up on us as adults.

Not only that, but Super Russian Roulette is a drinking game. Alcohol and death—the cardinal recipe for the games we play at older ages. The drinking rules are flexible but what is standard in every game of Super Russian Roulette is that only one player can remain by its end. And it might be that the winner isn’t even one of you sat in the room. As you all point the gun to your head, hoping to not see a giant skull appear on the screen as you pull the trigger, a trash-talking cowboy eggs you on, sometimes even turning you against each other with ridiculing chants.

This cowboy is actually one of the most impressive parts of the game. Not for the way he leans back with his spindled boots resting cumbersome on the table, displaying that distinct breed of rugged, confident, fighty masculinity seen only in the the most cocksure brutes. You’d punch him if he wouldn’t knock the living shit out of you in return. No, this fully-animated, fist-banging cowboy is the reason that Super Russian Roulette requires new cartridge hardware. It takes one megabyte of program memory to punch the NES up to the technical level it needs to host the bar brawler.

He has randomized outfits, facial hair, animations, and behavior so that every time you boot the game up with the ol’ cartridge it’s a new gloating asshole sat opposite you. He also has four whole minutes of modulated speech which, rest assured, is something no other NES game has. Thankfully the NES’s most talkative character is a charmer… oh, yeah, not quite. For real, though, Andrew Reitano—the electrical engineer that created Super Russian Roulette—says that his rowdy cowboy adds a lot to the experience:

“All of the (many many) late nights I spent programming were instantly validated the first time I witnessed the cowboy turn friends against each other, slamming their fists against the table and chanting in unison with a fictional character,” Reitano says. “I’ve heard the cowboy-assigned nicknames stick with people long after the game is over, and the players looked at each other as much as they looked at the screen which really is something magical.”

The Kickstarter for Super Russian Roulette is specifically to allow for the game to be mass-produced. Reitano wasn’t going to take it beyond an initial prototype but after it won the Audience Choice Award at Fantastic Arcade last year he was encouraged to open it up and allow more people to play it. It also helped that plenty of people apparently still keep hold of their NES systems and were contacting him to get a copy. The goal of $20,000 on the Kickstarter is what’s required to start the process that will have people turning their childhood console into an adult deathbox.

You can support Super Russian Roulette over on Kickstarter.