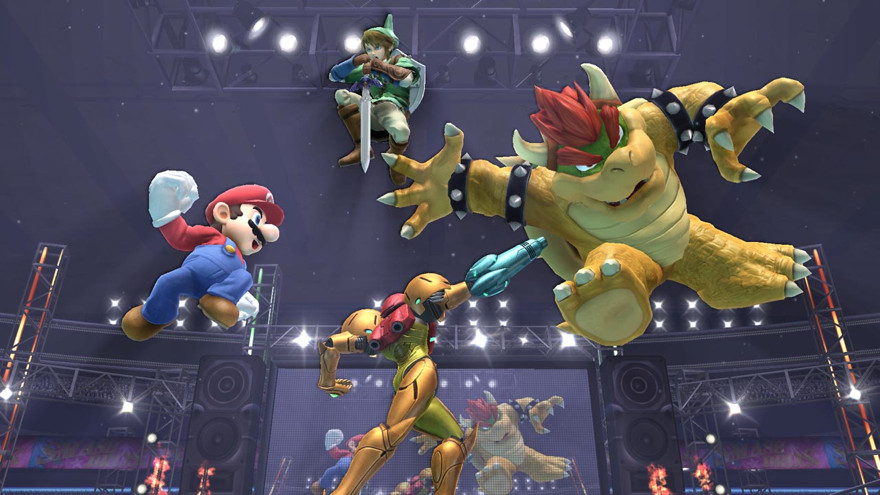 If you start up the software known as Super Smash Bros. for Wii U a second time in a day, the menu music will have changed. The game, you then realize, is self-aware. It assumes you’re going to play it. A lot. And so even this, a tiny consideration, an understanding that a sound heard over and over ceases to be a sound—now it’s just noise, or nothing at all—is a bellwether of what is to come. That the alternate menu music is a lovely samba version of the original menu theme adds to the overall feeling that this game has become sentient: enough to have a sense of humor, and to know what is beautiful and what is not.

There are a thousand ways to discuss a game the size of Super Smash Bros. Like so many Nintendo franchises, Smash has become something of its own genre. There’s nothing else quite like it—even if other companies attempt the flattery of imitation (and even if Smash Bros. itself is something of a slant rhyme to the Jump series in Japan, starting in 1989 with Famicom Jump, another company’s hero compilation). The fact that this Nintendo franchise comprises the near-entirety of every other Nintendo franchise makes the game much more than a very fun, always surprising, surprisingly deep and competitive fighting game. It becomes a reservoir of the past, an omnibus of characters and music and items spanning the company’s history as a game-maker. There’s a pressure to this burden: How best to explore over thirty years and well over hundreds of games, all boiled down into a single experience? Masahiro Sakurai, director and, in some ways, inventor of Super Smash Bros., seems to choose the High School chemistry method over something more calculated. This is no exploration; this is an explosion.

In my review of Super Smash Bros. for Nintendo 3DS, I compared the game to a galaxy. It appears that was a bit premature. I mean, where do you go from galaxian? (Don’t say Galaga.) So allow me to backstep on the celestial adjectives. Let’s return to the lab, where tubes fill with volatile chemicals and tinkerers stand over bunsen burners, tilting liquids slowly into flasks and waiting for something to happen.

The Smash Bros. arena is where such combustions take place. Fighting games are often determined by fists plowing into faces or the occasional flaming projectile. Nintendo’s party brawler began with typical subversion: Instead of bleeding away your opponent’s health, each landed blow raises some intangible percentage; the higher your number, the farther you soar through the air when smacked off the stage. This is how it’s always been in Smash, but it was not an obvious decision at first. One thing the Wii U version could be faulted for is an over-reliance on this formula: The red and blue liquids, first poured back in 1999, still create an exuberant mess, but the equation has only been amped up, not significantly changed.

For the first time, a Smash Bros. game has an official compliment to its own self-branded Smashing. The Wii U version and 3DS version, released two months apart, are meant to co-exist, overlapping just enough to satisfy double-dippers while not being broken-in-half scraps of the real, fractured whole. The game’s box and title screens establish their separate-but-almost-equal status with color coding. The 3DS game’s logo glows red. The Wii U logo is haloed in blue. Each is a primary color. Each asserts its own dominance. But when combined, red and blue form that most prominent of shades: Purple. This duo of Super Smash Bros.s is in alliance with other rarified works of art that earned this royal tint, sitting in the same V.I.P. lounge as Rain, as People-Eater, The Color, Nurple.

It is no accident this same shade evokes blood rushing to the surface of pounded skin, a bruise forming. Such a mark is often a reminder of pain. But with Smash, we are merely lucky to have been hit.

Unique to the Wii U game is the option to use an “amiibo,” the new line of figures that launch alongside Super Smash Bros. for Wii U and will be used in various other Nintendo games. Here, you tap the figure on the GamePad and through the magic of Near-Field Communication, a computer-controller combattant appears. This is in fact a stand-in for your figurine, called a “Figure Player.” You don’t directly control the characters. Instead, you train it, or battle against it as you would another person, or spar with it to practice. Nobody around? Zap the amiibo in and you’ve got a 2nd player ready to go. You could also fight a standard computer-controller player. But there’s something about the persistence of your little plastic buddy-fighter. A computer character feels random, a new entity every time. This amiibo remembers.

What takes place in our mind — a toy coming to life — now plays out as we once wished.

It’s a gimmick but a clever one. And it reinforces the essential nature of toys and how we, at one time, once reacted to them: with the belief that they led imagined lives. Now, in a way, they can. This little creature fights its own battles. You can see it right there on the screen. What takes place in our mind—a toy coming to life—now plays out as we once wished.

Games from which Super Smash Bros. for Wii U plucks content: Famicom Grand Prix II: 3D Hot Rally. Sonic Adventure 2. Kirby Squeak Squad. Panel de Pon. Super Mario Galaxy 2. Mother 3. nintendogs. Metroid Prime. Duck Hunt. Mappy. An exhaustive list is not necessary, nor the point; Nintendo isn’t interested in wowing you with numbers for the sake of bombast. They and their development partners merely have so much history from which to cull doodads and widgets and side characters and soundtracks that to take from the whole pool becomes something of an accidental boast.

“Is that song in the background from Mach Rider?” you ask yourself while trying to fling Wario off a floating platform. And it is. But unless you dig into the SOUNDS option and find the track, you won’t have the reference spelled out for you. Dig deeper and find a new remix of Donkey Kong’s original score by Hip Tanaka, noted game composer and present-day DJ. Keep fighting and one day, a match will end with you throwing a glass vial on the ground, out of which appears a two-dimensional tank from Advance Wars; it shoots into the fray and sends a pale yoga instructor from Wii Fit flying. Super Smash Bros. is like the game version of that monochromatic clip montage during the Oscars, In Memoriam, showing blips from all those actors who have died in the past year. But instead of five seconds of some quotable line from some memorable movie, you’re handed the prop that stood in the background and told to swing it into the protagonist’s ribcage. If that’s not the best analogy, let the sloppiness stand in for the chaos unfolding on-screen while eight characters from eight different worlds all collide at once.

My Level 24 amiibo I’ve dubbed “Lil’ Mario” is fighting against a computer-controlled Lucario. I’ve set them up like a Nintendo Don King, dropping them in a ring to see who stands last. I watch, hoping to learn tactics for my own feeble strategies, but also to see how my protege does. Lil’ Mario is extra-speedy; I’ve trained him to be a firecracker, jumping across the stage and never standing still. Actually I’ve “fed” him equipment like various boots and wings that somehow transmute into quickness. The game uses verbiage more akin to animal husbandry than MMA training. You “feed” your figurine certain power-ups that affect their stats. My amiibo was light on his feet but with a tough, thick skin, Still, Lucario was taking it to him. I could only sit back and watch, silently rooting Lil’ Mario on.

The character had taken over.

The Aura-type Pokemon smacks my toy-come-to-life off the screen. But Mario is persistent. He comes back hard, leading with a flurry of jabs, then bounding backwards and sniping with long-distance fireballs bouncing across the stage. He then jumps in close, flips his opponent backwards with a swoop of his cape and, Lucario helplessly facing the other direction, strikes forward and launches the Pokemon into oblivion. Then the amiibo does something unexpected. With Lucario still spinning off into the distance, Mario grows of his own volition—he becomes massive, as if having eaten a Super Mushroom—then reverts to his original form. This was a Taunt move, normally performed by pushing Up on the D-pad. But I wasn’t controlling Lil’ Mario; this was one artificial intelligence having a laugh at the expense of another. He had learned to be not only fast and strong but a prankster, maybe even mildly cruel. I was no longer responsible. I was simply the catalyst for evolution. The character had taken over.

Super Smash Bros. for Wii U isn’t always adapting. The game is often consistent for a reason. Every time you defeat “Classic Mode,” the same music plays. This is a traditional tournament-style ladder of competition that ends with a giant white glove called Master Hand, played out on a platform floating through a cycle of cosmic seasons. You deliver the finishing strike and several freeze-frames depict the moment: 400 Blows as directed by Terry Gilliam. Then the action cuts away to a simple screen tallying up your score and a collection of objects gathered over the course of the fighting: A trophy, a piece of equipment to boost your stats, a clothing item. But the music that plays isn’t triumphant or bombastic. You hear a light tickling of piano. The notes are from the main theme but transposed to a minor key. They play softly, pianissimo. As you look at your bounty and reminisce about each fighter bested, each really just a toy that has come to life and that you’ve willfully knocked off its pedestal, the emotional tone set by the music is plaintive … almost sad. Or perhaps it is meant to be peaceful, a soothing epilogue to all that violent grandeur. And no matter how many times you complete the sequence, you will hear that same, slightly melancholy tune. Instead of a rousing aria to the victor, the game presents a dirge for those defeated. Here, then, is another sign that Super Smash Bros. for Wii U is self-aware: It knows the difference between those who win and those who get in the winner’s way, and that one is no better or worse than the other.