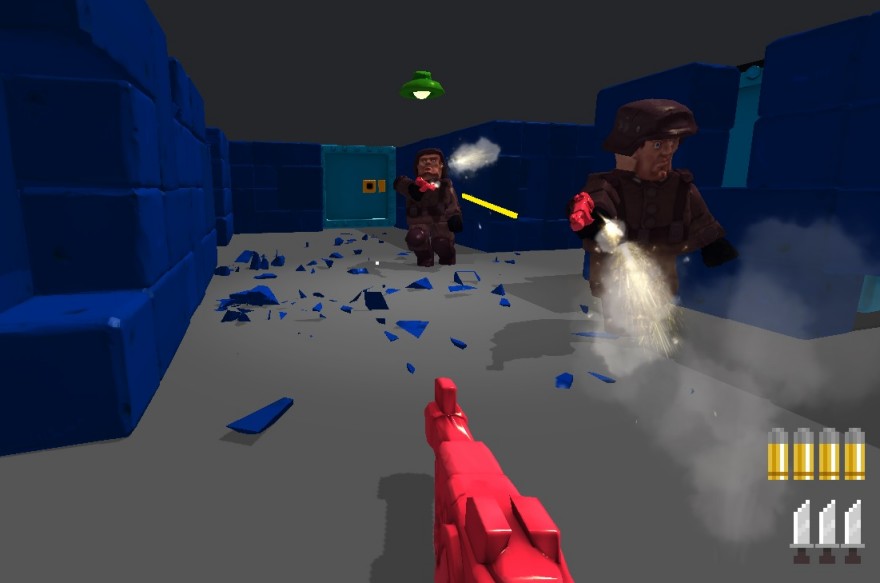 I like shooting hands. Call it a fetish if you will.

It’s rooted in my time spent with Goldeneye 007 for the N64. It was among the first shooters to have body-hit detection, which meant you could aim the reticule at, say, an innocent scientist’s hand, fire a bullet into it, and for about a minute (maybe longer) they’d shake their arm around, and hold onto their hand as if it bore a fresh wound. This provided me hours of entertainment between the ages of eight and fourteen.

Free Lives, the South African team responsible for having me relish ’80s Hollywood action heroes in Broforce, apply a degraded version of this body-hit detection system to their reissue of classic first-person shooter Wolfenstein 3D. And that’s not all they’ve added.

Arms are pushed around by the unwieldy force of pistol fire

At first, you’ll want to laugh and laugh and laugh at Super Wolfenstein 3D. All of the Nazis have ragdoll physics enacted on their limbs, turning them into wild flopping gestures so, inevitably, it’s hilarious.

Arms are pushed around by the unwieldy force of pistol fire, causing them to shoot in all directions while marching at half-step towards you, a bloated square-jawed stare unflinchingly fixated in your direction. If they fall over flat on their backs, they kick their laced brown boots against the floor as if having a toddler tantrum. You can stand behind a blue brick wall and, due to the destructible assets, they will shoot huge holes in it while pushing their rigid faces through as if to say “Heeeeeeeere’s Jerry!”

It gets even better when you throw a dagger into their face, knocking them over. As it takes two puncturing blades to kill them, they’ll get back up, wearing the dagger as an obtuse body-piercing, and fall over themselves at you all over again.

Oh, and wait until you see the German Shepherds. They’re drunken blobs of teeth and dog; features blown up into furry balloons, running towards you clumsily—it’s like all the organs, bones, and blood is jelly—while a cartoon-like “nam-nam-nam-nam” sound suggests their ankle-biting intentions. I would die if one of those ran towards me in order to kill me as I’d be laughing so hard as to be defenseless.

But my favourite way to play Super Wolfenstein 3D is to turn it into a passive shooter. Rather than aim to kill or maim, you throw daggers and shoot bullets at hands as it knocks the guns out of them. Once done, you then have a harmless Nazi that will follow you around everywhere, one elbow locked as if aiming a phantom pistol.

You can win the war by disarming every single Nazi and then making a mockery out of how useless they are without a weapon. It’s up to you how long you watch as they brush their grey and brown uniforms against you as if an impossible osmosis would transpire, as if you’d be turned into one of them through proximity alone, before throwing a dagger into each of their knees.

You can download Super Wolfenstein 3D on Game Jolt for free.