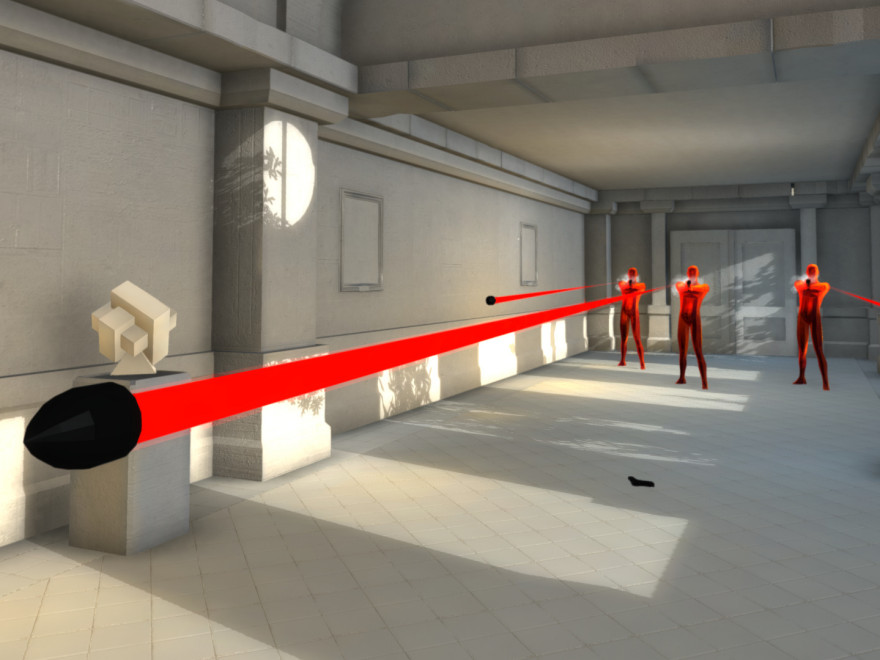 Control over time is what makes SUPERHOT tick. It’s a fantasy that’s truly worthy of a videogame: time only moves when the player does.

But the recently Kickstarted game is reaching for another dream, too: virtual reality. SUPERHOT was one of three games shown off by Oculus Rift at E3. Since Oculus’ second development kit uses positional tracking, the newly designed SUPERHOT allows the player to dodge a bullet just by moving her head out of the way and watching the bullet slowly pass by. It was a good sign of Oculus Rift’s stated emphasis on gameplay over hardware at E3.

One true maestro of time, Scott Thrift, was amazed with SUPERHOT. Thrift created ThePresent, a 365-day clock that “helps players of the game of life to be more present” in their ceaseless battles against boxed, calendar-oriented time. SUPERHOT’s similar experimentation with time caught his attention. “There is a certain level of predictability with any FPS. You’re going to be moving forward, pointing a gun, and shooting enemies,” he said. “But by manipulating time through movement, the game cracks open the dimension of time in a way I haven’t seen since Braid.”

Time was the key to reimagining how a first-person shooter could be created. I spoke with Luke Spierewka, a coder for the team behind SUPERHOT. “We imagined SUPERHOT as a game about time from the get go,” he said. “It was meant to be a game where the gameplay wouldn’t have to feel rushed. You wouldn’t have to always be acting quickly and relying only on your reflexes. And in hindsight, I think this was a good decision.”

Maybe he’s right. What if after all of the quick, go-go-go action of shooters like Grand Theft Auto V or Resistance 3, we’ve forgotten what’s most fun about shooters: taking good aim, and then diving into cover. Virtual reality, it would seem, wants to immerse you in a much slower world—and not necessarily overwhelm you with grenades, bombs, and tanks (or at least not yet).

When time reaches a near standstill, SUPERHOT shines. Luke put it this way: “When you let go of the keyboard in SUPERHOT, the world stops.” And at E3, this meant that everything you saw, the entire kinetic energy of the perceivable world, came to a standstill. And suddenly, you’re Snake from Metal Gear Solid. You’re calm, you can look at your surroundings, and you’ve been thinking for a while about your next move. For once, time is on your side.

And so SUPERHOT strikes another checkbox in humanity’s bucket list: the ability to perceive a moving bullet with one’s own eyes when said bullet doesn’t exist. But is it a sign of things to come? Oculus Rift has shown interest in the game since October. And if Oculus is willing to rethink the very traditional, much as SUPERHOT has, then maybe the poster child of technological progress can deliver on the much-awaited promise of virtual reality. SUPERHOT works so well because it’s transformed the quickness of the FPS into a wholly engaging, precise, and thoughtful experience. The future of the FPS and of VR is bright, assuming time continues its slow forward march.