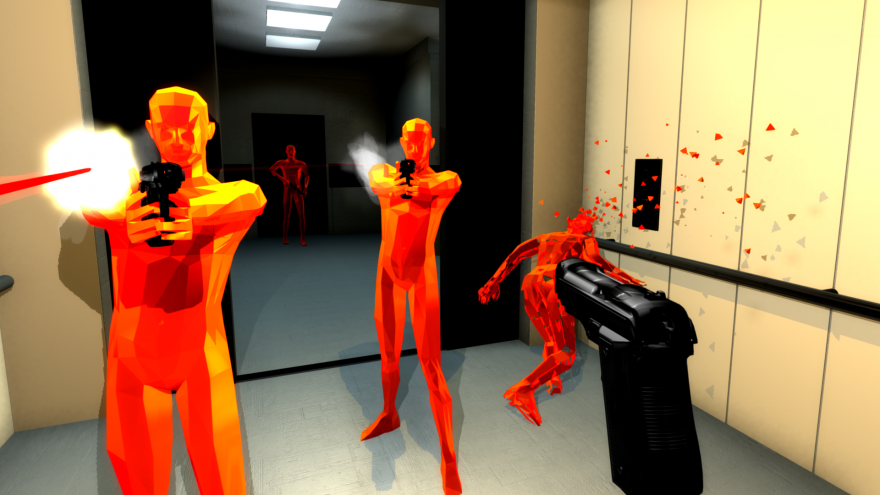 Superhot is both the Matrix videogame we’ve dreamt of (naturally, whilst cradled in our biomechanical nutrient pods) and the best argument yet for the Oculus Rift.

Meditative may be a stretch. Superhot is a pensive shooter. It slows you down. Like For Each Our Roads of Winter, Superhot invites you to take a moment, breath, and consider. It is not just running and gunning but doing so with the clarity of a Piet Mondrian painting. Its stark colors and minimalist architecture have certainly got us anxious to get our hands on it. Oh…and the katana.

Now it’s poised to bring its time-bending gospel to Xbox One first. Playstation later, one assumes, but as part of Microsoft’s renewed focus on independent games the company has secured exclusivity. ID@Xbox apparently has hundreds of games in the pipeline but for now, Superhot, Cuphead, Massive Chalice, and Lovers in a Dangerous Spacetime are among the 25 titles announced yesterday at Gamescom.

Though it’s had a somewhat beleaguered history the announcement seems to give ID@Xbox a very solid slate of games, one that we’re certainly going to keep an eye on.

Of course, if you have a PC the bullet-dodging De Stijl-em-up will be out June 2015 with no fuss.