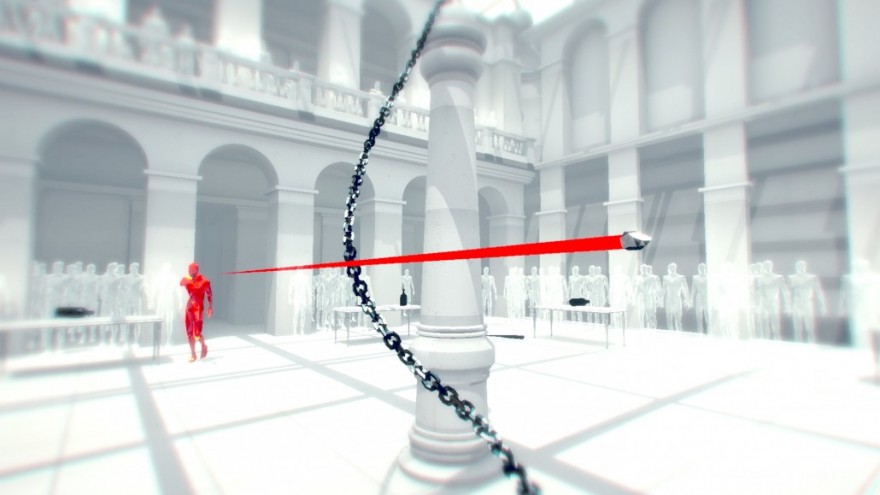 Artistic violence is so in right now. Particularly for those who gazed upon the dirtied, bloodied face of Mad Max and found themselves thinking “Ooooo preeeetty!” instead of “Yuck! Death and destruction!”

you can practically hear the sharp edge dividing the air.

The latest SUPERHOT trailer comes at an opportune moment, then, while people are still happily riding this beautiful wave of bloodshed. SUPERHOT is—and always has been—the little first-person shooter jam game that could. After the free jam build went viral two years ago, the team behind this The Matrix-esque simulator took to Kickstarter and raised a whopping $250,000 when all was said and done.

The new E3 trailer shows off more of the game’s deliberate yet action-packed play. For some reason, a metallic chain hangs suspended in the mostly white arena: a dividing line between you and your foes. Your targets, represented as nondescript red glass figures, raise their hands toward you—poised to take the fatal shot. As a first person shooter that, of course, focuses on shooting, probably the biggest twist appears in the form of a samurai sword. The blade passes inches from your camera and you can practically hear the sharp edge dividing the air.

Because the set pieces in each level only move when the player does, the SUPERHOT team needed to find a way to make the often motionless and silent moments of pause feel more active. Distorted and distinct ambient noise appears to have been their solution. The diegetic sounds from the chain clink and clank in slow-motion, like water rippling through a fast stream.

Although SUPERHOT consists of forty short levels best understood as time-manipulation puzzles, creator Piotr Iwanicki recently described it to Polygon as first and foremost “an action game that waits for you, that allows you to move at your own pace. It’s a ballet of moving, shooting, grabbing weapons, dying and starting again. It can be a very fast game, if you want it to be, or you can move through it as you like.”

You can expect SUPERHOT in the next year, on both PC and Xbox One.