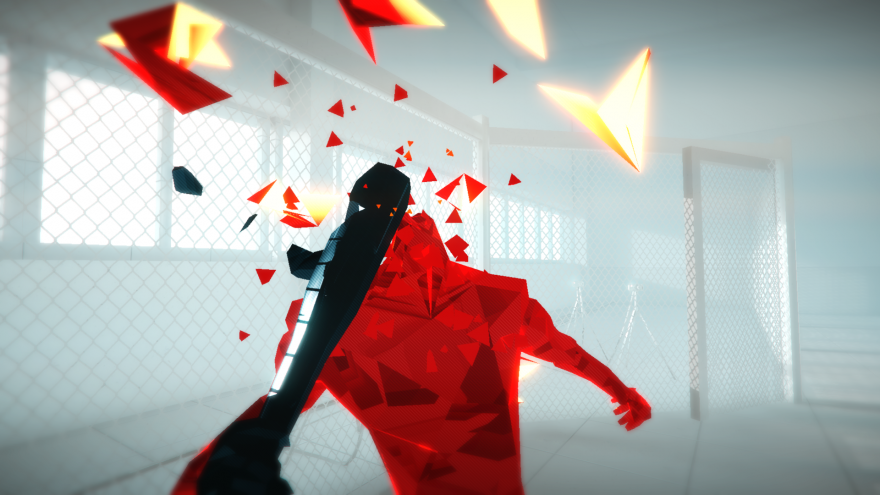 Nothing happens without the player’s say-so in SUPERHOT. Their avatar—represented only by a pair of black, jagged-polygonal hands and a gun—is in complete control of the world. Enemies depicted by shimmering red silhouettes run into gauzy, white-washed rooms, ready to fight. Their figures and the black of bullets and nearby weapons stick out like exclamation marks. But nothing moves. Despite the action of every level’s opening, the impending violence hangs suspended in the air until the player is ready for it to begin. The enemies form a tableau that moves as slowly as cold molasses, only speeding up when the player takes a step forward or fires their gun.

SUPERHOT gives the impression that everything that’s about to happen is entirely at the player’s behest. It wants to seem as if it’s a game that exists only in reaction to its audience’s input.

Shooters are often meant to make the player feel like an invincible warrior. A bullet to the torso is afforded only a few seconds of health-regenerating inconvenience. An explosion may kill the player outright, but even death isn’t much of an obstacle. It means only a return to a conveniently placed checkpoint and a little bit of effort to regain lost progress.

SUPERHOT takes this style of empowerment to its logical extreme by repurposing the “bullet time” slow-down effects introduced in games like Remedy Entertainment’s Max Payne (2001) and Monolith Productions’ F.E.A.R. (2005). Meant to translate the impossibly acrobatic firefights of John Woo action movies for an interactive medium, a single button tap allows the player to emulate the superhuman reaction time of Chow Yun-fat, weaving through in-flight bullets and dispatching enemies with impeccably placed trick shots.

Making this effect an intrinsic part of the game’s design positions SUPERHOT as the zenith of this style of shooter. Rather than simply imply that the player is an iron-skinned killing machine through inconsequential deaths, regenerating health, and “bullet time” toggles, the game performs the ultimate act of subservience: its enemies only react when the player wants them to.

The result is as satisfying as that suggests. Positioned as a god, SUPERHOT’s player can take the time to survey their surroundings, noting enemy positions, stepping out of the way of bullets, and chaining gunshots together with thrown ashtrays and knockout punches. There’s some level of challenge to this—taking a single shot kills the player character and enemies swarm in from all angles—but any sense of weakness is obviated by the constant understanding that the game is a program that only functions in response to its user’s manipulation.

Watching SUPERHOT’s end-of-level replays, in which the player’s staccato movements are rendered in full, uninterrupted speed, shows a character with complete mastery of their situation. Though each step toward the replay is earned in forethought and skill, the fluidity of the playback demonstrates shooter thinking on steroids, the unholy reaction speed of speed-runners and superstars made attainable to the average player. It’s an endlessly thrilling process that combines the intellectual flattery of solving a puzzle with the chest-thumping bravado of skillfully navigating a hectic, deadly action scene.

The ultimate act of subservience: its enemies only react when the player wants them to

In between levels, the gunfights are revealed to be software running on an in-game computer. While moving through an MS-DOS style menu, chat messages pop up from one of the unseen protagonist’s friends. As in Kyle Seeley’s Emily Is Away (2015), the player types nonsense on their keyboard, which automatically translates into prosaic responses. These sequences foreshadow later levels, when launching the superhot.exe program forces the player into a “tutorial mode,” rather than yet another combat level.

In one of these sections, an omnipotent force requires the player to perform simple tasks. Walk a few paces. Look around a jail cell. The screen flashes instructions in big, bolded letters when a command has been followed.

The player, having thought themselves the master of the game, suddenly finds their relationship to the program reversed.

“YOU ARE NOT IN CONTROL” flashes across the screen.

As effortlessly powerful as the player may be within the confines of the shooter, they have no real agency outside of it. The kind of control a shooter offers, SUPERHOT says, is an illusion. This is a humiliating lesson, and it goes on to form the entire narrative theme. As it finds its pace, the experience involves a constant movement between moments of tremendous power and utter weakness—between ego-swelling combat levels and the crushing servility of having the most basic actions dictated by software.

There are plenty of videogames that make limpid attempts to comment on the striking similarities between following videogame rules and personal determinism. This is the narrative basis for games ranging from BioShock (2007), Spec Ops: The Line (2012), and Hotline Miami (2012) to The Stanley Parable (2013), and Undertale (2015). In each case (and to varying degrees of success), the player is meant to feel guilty for their readiness to submit to the whims of a program. If they’re presented with an opportunity to murder in, say, a game where violence is the primary form of interaction, the story will (perversely) indict indulging in this base instinct. This kind of commentary has wrung hollow far more often than it’s resounded, and SUPERHOT’s first movements into similar territory cause concern. Luckily, the game is delightfully tongue-in-cheek. An apparently infectious program, the in-game computer asks the player to spread word of the superhot.exe software by telling friends it’s “the most innovative shooter in years.” It’s hard to be upset with the story when it’s couched in sly arrogance and winking acknowledgement of its own (supposed) cleverness.

This doesn’t entirely compensate for a narrative that, self-aware or not, is too derivative to resound. But it does keep SUPERHOT’s best feature intact— effortlessly moving the player between constant swings of empowerment and helplessness. There is no shooter quite as willing to prostrate itself before its audience as SUPERHOT while always reminding them that, no matter how tough the game may make them feel, that same sensation can be stolen from them in a heartbeat.