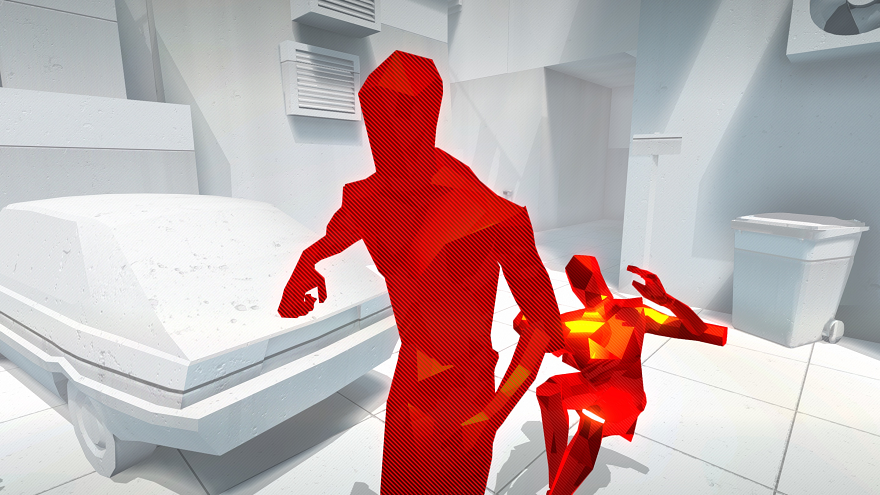 There’s nothing soft or spongy in SUPERHOT. Its world is filled with stiff surfaces and fragile objects. Whenever things collide, they break. Bullets don’t wound enemies, they shatter them. Surviving one of its levels requires thought and precision, but also some degree of trial and error. Adapt to the game’s unyielding logic or crash up against it, time and time again, in a thrilling but ultimately futile cycle of self-destruction.

SUPERHOT’s clean-cut aesthetic and “time only moves when you do” twist have defined it since the beginning, back when it was only the rough prototype of a seven day game jam. One Kickstarter campaign and several hundreds of thousands of dollars later, the game has matured and grown, while staying loyal to its initial conceit. A beta build of the game released to backers earlier this month shows just how far it’s come. “There’s always negotiation between ‘what we want to do’ and ‘what we technically can do,'” says Piotr Iwanicki, the game’s creative director. “The core of SUPERHOT is simple as can be and we expand in places that have the best ratio of awesomeness vs. time required.”

It recognizes the human instinct to leap before looking

That trade-off doesn’t just guide the game’s design, it also describes the central relationship between the player and the world she’s been dropped into. While levels don’t have strict time limits, narrow environments and the many enemies that swerve through them make it easy to get trapped in a corner. Once there, it doesn’t matter whether time stands nearly-still as you contemplate your next move: it’s already too late. The dye is cast and all that’s left is to accept the incoming bullets and punch the keyboard for a quick restart.

The promise of SUPERHOT is that you can slow down time and analyze every situation at super-human speed relative to the enemies who have come to gun you down. But its design just as often encourages impulsive maneuvers over well-laid plans. It recognizes the human instinct to leap before looking and articulates a navigable maze through which it can be channeled, where even the less successful attempts seem to belong to a larger, cohesive movement.

Iwanicki refers to this as the game’s choreography. “You should feel that even your tiniest move matters in some situations,” he says. And indeed they do. I thought I’d nearly finished one level, shifting breezily to the left, dodging one enemy’s bullet while landing my own, only to stray into the path of another’s fired from the opposite direction.

The next time through I decided to shift in the opposite direction. In doing so though I missed my target and was left to play monkey in the middle with two faceless goons and no more bullets, The problem wasn’t where I chose to move, but how I chose to get there. I needed to be less exaggerated and more exacting. On the third try I shifted to the left, but only slightly, just enough to see both bullets graze by on either side of me with plenty of time leftover to handle my last attacker.

playing SUPERHOT is like fumbling through a jazz solo

Iwanicki doesn’t like to call SUPERHOT a puzzle game, and after moments like these I can understand why. “It’s much more a game about execution than the solution in most cases–levels don’t have clear solutions,” he says. “They always leave space for improvisation and that’s where the magic happens.” Like the space between notes on a sheet of music, these pauses are as important as the violent destruction that follows them. “Whenever you feel overwhelmed with the action,” Iwanicki explains, “you have a chance to stop and think. It’s a natural mechanism for creating your very own rhythm of playing, your very own difficulty.”

If playing SUPERHOT is like fumbling through a jazz solo, however, the music that results doesn’t just belong to the player. The cumulative effect of reacting to each new set of bleach-white rooms and ruby-red intruders is an unexpected form of digital syncopation. The game presents itself as a hack into a mysterious program located on a corporate server that one friend shares with another in a chatroom. To the degree that SUPERHOT has a story, it consists of meta-moments like these combined with short title cards that flash subliminally during the levels themselves.

“Deep into production I’ve rewatched Videodrome by David Cronenberg,” Iwanicki explains. ” It was a movie I watched many times before, but had somehow forgotten about it. Suddenly, I see so many SUPERHOT themes there that it’s almost strange.” I didn’t encounter anything during my time with the game’s beta that made the connection explicit, but a video stored in the start menu titled “rsm” acts as a teaser for both the real SUPERHOT and the one referenced within the game itself. In it an electronic ad for the game is read overtop of scenes of people screaming and writhing on the floor rendered in ASCII.

It’s the most memorable part of the beta outside of the actual gameplay, and one that’s of a piece with what Iwanicki says is one of the game’s central themes. “The gameplay is about you being in total control and the storyline plays on it,” he says. Players know when a level is complete when a deep voice breaks through the ambient noise repeating the words “Super. Hot.” He calls this a mantra of sorts, and hopes it feels “a bit like hypnosis or a gratifying phrase you are conditioned to like.”

I would have disagreed with Iwanicki if, two days later, driving early in the morning with the windows down and the radio off, I didn’t start uttering the same words over and over again, completely unprovoked. I didn’t much care for the creative choice in the game itself. The voice was jarring, and felt like a dissonant beat in-between the otherwise seamless flow of actions. But the fact that it had buried itself into an un-monitored fold of my grey matter despite that was probably the point.