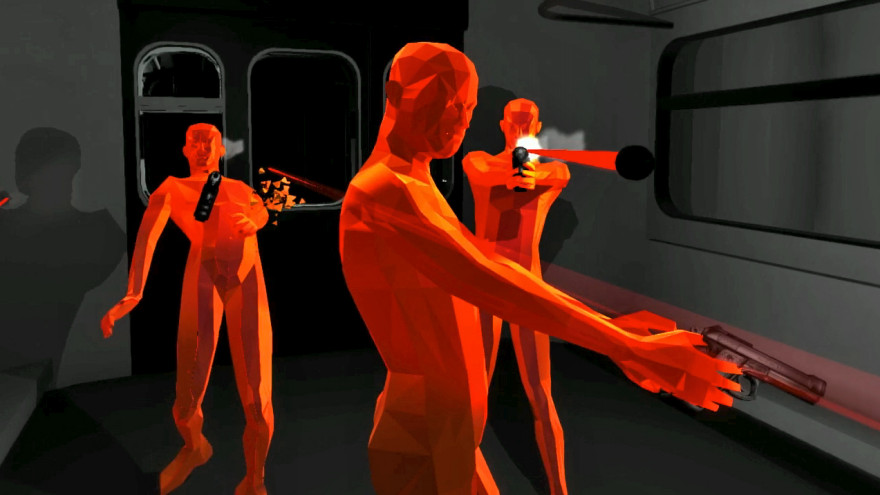 SUPERHOT is the videogame spin-off of The Matrix that Warner Bros. would have paid top dollar for a decade ago.

Levels are lobbies and offices full of gun-toting enemies. You perform fluid torso twists around streams of bullets to the sound of empty bullet cases dinging against a hard floor. Windows smash and necks are broken while you dance in slow-motion to avoid death. It’s no surprise that it has reached its Kickstarter funding goal—$100,000—in a matter of hours. It is, as the title says, super hot.

The concept is simple: “time only moves when you do.” It’s a mechanic adapted from Time4Cat. In that small Flash game, you controlled a hungry cat scrambling for dropped food at a crossing while dodging the pedestrians that only moved when the cat did. Bizarrely, SUPERHOT‘s creative director Piotr Iwanicki thought to combine this clever mechanic with the violent office escape in Biting Elbows’s first-person music video for “Bad Motherfucker.”

These seeds of inspiration were planted in Iwanicki’s mind before 7DFPS arrived in August last year. The seven-day game jam was just the catalyst that enabled the components to be slotted into place, forming SUPERHOT‘s protoype (playable here). With the idea realized in basic form and playable it soon spread across the internet. Game designers became jealous that they hadn’t come up with it first. Thousands of players were compelled by how stylized bullet dodging became slow-motion spatial puzzles.

It had to happen: SUPERHOT‘s small Polish team began working on a full version of the prototype demo straight away.

“Back then, we designed levels in SketchUp and imported them to Unity,” SUPERHOT‘s “coding ninja” Luke Spierewka says.

Adding new weapons to SUPERHOT‘s previously handgun-only ethos seems essential for an expansion. With the katana, you extend the range from which you can kill enemies, and also gain the ability to slice bullets out of the air. The shotgun and rocket launcher are obviously much more destructive, and in a game that mostly occurs in slow-motion, it allows for quite the spectacle as particles and fragments fly through the air.

But, unlike the parades of destruction in Battlefield and Call of Duty, it’s not detailed graphics tuned to the demands of a realistic aesthetic that are being relied upon to supply the visual awe.

flat shaded bullets shine like jet black diamonds as they zoom through the air.

“When creating the initial prototype we went with a minimalistic aesthetic because A) it looks quite good, and B) it’s the only thing that we could deliver within time constraints and with no graphic artists in the team,” Spierewka explains.

“Sticking with that style allows us to play around with suggestions and have the player’s mind do half of the work for us. Achieving the same effect with photorealistic visuals is much, much harder.”

SUPERHOT—with its single color silhouettes—still looks a little like one of those iPod adverts from 2003. The additions are subtle, confined to additional lighting and shadows, more architecture, richer reds, and more objects to break. The new, flat shaded bullets shine like jet black diamonds as they zoom through the air.

While an effort is being made to retain SUPERHOT‘s minimalist visuals, the level design is being stretched in entirely new and ambitious ways. The team is looking beyond the prototype’s small and simple puzzles by experimenting with open spaces that present multiple solutions. They’re grander stages for the performance of the bullet-dodging ballet required for success.

“Our design process is basically this: we start with an idea for a fun scenario (“the player is fighting against enemies in a moving subway train”), then we try to design a barebones version of the level to see if it works, and after that it’s just a matter of iterating on it until it’s cool enough.”

A level editor is something that we’d like to do

This upcoming full version of SUPERHOT will also have a story to contextualize each stage. An unnecessary addition perhaps, but one that Spierewka argues adds a purpose for the player to fight for. Still, he says that SUPERHOT‘s story is most likely going to be vague.

“I personally think that the way The Binding of Isaac approached it was quite neat—you could play through most of the game without caring for the backstory, but it was there, motivating you to play more and find out what happened to Isaac’s family.”

Being a top-down roguelike shooter brimming with guts and feces, The Binding of Isaac is an unusual comparison to SUPERHOT, but there are similarities in terms of how each game is designed to be replayed. In Isaac, it emerges from the procedurally generated levels and vast library of items that can only be learned and applied usefully through experience.

SUPERHOT doesn’t quite share Isaac‘s degree of replay necessity as it lacks random content, but improving on your past performances—a speedrun mode could be on the way—and discovering more creative solutions to the more expanse stages incites revisits. Environmental storytelling could work well in this framework, with information hidden on a computer monitor, or within files splayed across a desk that you’d miss at first due to, you know, dozens of bullets flying towards your face.

What may be more popular, however, is allowing players to create their own SUPERHOT levels, either through a level editor or modding support. It’s certainly being considered.

“Allowing people to mod SUPERHOT would require us to rewrite a huge part of the game, including some things that we take for granted in Unity, so we’re still on the fence with that. A level editor is something that we’d like to do though, and will be one of our stretch goals.”

If SUPERHOT has a level editor it will probably be a matter of days before a full-blown, nearly impossible bullet hell level is created, or the famous lobby scene from The Matrix is faithfully recreated. Another Kickstarter stretch goal worth reaching is the Replay Mode at $200,000—it lets you watch your performance back in real-time. With this, finally, SUPERHOT will fully cater virtually performing the moves of Neo, but also watching the whole charade back with a satisfied and well-earned grin.

You can support SUPERHOT on Kickstarter.