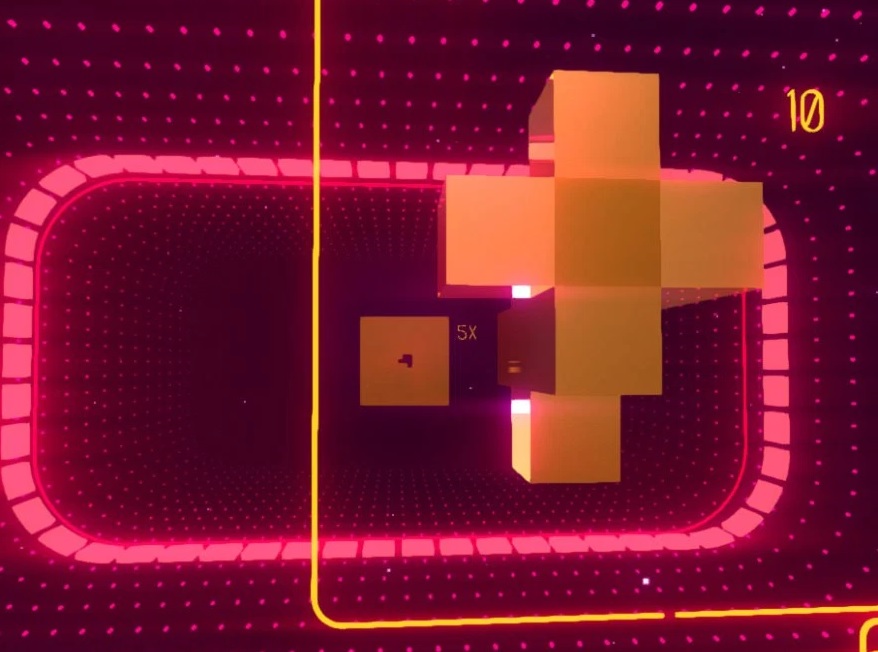 VR had me skeptical, but then again, I’m pretty much always skeptical of new gaming technology. Similarly, when Microsoft’s Kinect rolled around, so too did my eyeballs, right into the back of my skull. I can lazily holler at my Xbox to turn on? Big deal. With VR, I could scan my entire surroundings and yet stay encompassed in another dimension? So what. My perception of VR was comparable to what the editors at Time thought when putting the creator of the Oculus Rift on their cover in that goofy pose: that VR was probably silly. Then I played a demo of Playstation VR launch title SUPERHYPERCUBE, and all that terribly misguided scoffing changed. (Though Kinect remains a joke).

In KOKOROMI’s SUPERHYPERCUBE, the objective is to fit a cluster of cubes into a distant, similarly shaped hole. A simple enough objective—except for when it gets tricky. On the simple side, you use miscellaneous buttons and the analog stick to roll your cube in a specific direction to reorient it. Wearing the Playstation VR headset, ducking to peer around your cube grows tougher and tougher with each growing cluster of cubes the player’s cube absorbs. Your rolling of the cubes becomes incredibly frenzied as the game goes on. In a nutshell, it’s fucked-up VR Tetris.

The game itself feels intuitive, as you peer around your Tetris-esque cluster of cubes in the game’s space, but this becomes difficult as the game’s speed quickens and the cube cluster’s size grows to astronomical sizes. As you flip your cube cluster and quick speed it through a passageway (much like the “hard drop” function in Tetris) you garner points and extra cubes join your cluster—or, if it doesn’t fit, pieces either break off or your cluster falls apart entirely. As I neared the end of my demo, the game’s speed became overwhelming, and my panicked rolling of the cube cluster led to it crashing around where the hole was. It crumbled before my very eyes, and I was presented a game over screen.

But the experience is transcendent: arcade-like through and through, while still being fun and beginner-friendly. I can easily envision sitting on a couch with friends and oohing and ahhing as we struggle to overtake each other’s high scores. The VR is simple but effective: the head-tracking of the headset make the game feel like you’re literally inside this futuristic, technicolored world. The game’s style aesthetically reminded me of the on-rails PS2-era shooter Rez, which easily holds up today.

SUPERHYPERCUBE plays like it was tailor-made for VR, so it’s hard to imagine that it technically didn’t begin that way. Originally developed for Gamma 3D, a 2008 art and game show in Montreal, the game’s original iteration was very different. The game’s goal and head-tracking features remain the same, though the original used classic red and blue 3D glasses and head-tracking through Wiimotes. But in the past couple years of its development, and its refocus toward VR specifically, KOKOROMI traded the original monochrome color scheme for a vibrant, neon-colored palette. The team says they were inspired by the Southern Californian minimalistic art movement “light and space” and sci-fi films such as Blade Runner, Xanadu, and 2001: A Space Odyssey.

These touchpoints evoke the usage of neon, LED, and even natural light to create obscure, often geometric art—art that changes over time or differs depending on how one perceives it. Its influence is littered all over SUPERHYPERCUBE, from the style to the way the colors change as you gaze around your cube cluster, to the ambient music and bright style. This is a game that isn’t focusing on a firm time period for inspiration, but its scope covers many. Who knows where all this VR stuff is going, but, as it stands, SUPERHYPERCUBE will exist in my timeline as the VR game that made me a believer.