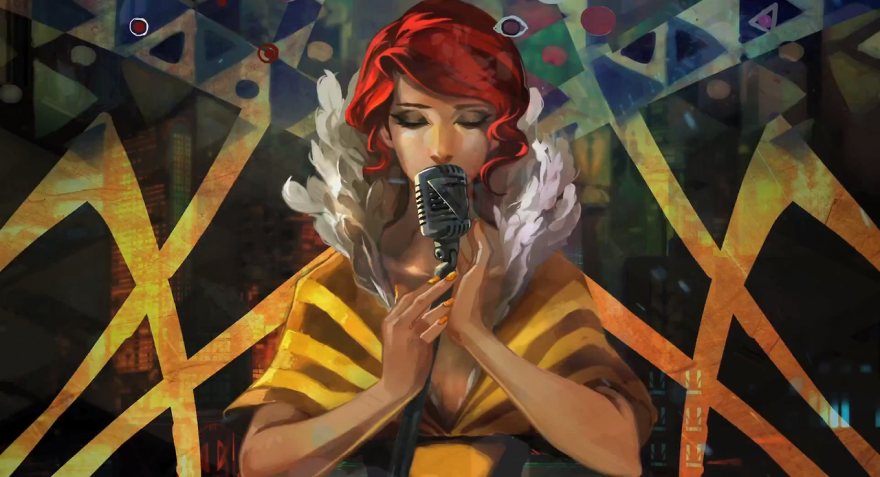 Underneath the burned-out sky hangs above the metropolis of Cloudbank, I found out that I could make Red hum. I had just been through a few early encounters with robotic enemies and decided to make a few review notes and become more acquainted with the controls. There, in the neon-lit alleys of an eerily vacant future-city, I discovered that a press of a button muffled the background to focus a spotlight on the normally taciturn protagonist as she hummed soulfully along to the electronic ambience.

The strange juxtaposition of intimate solipsism and flashy performativity lies at the heart of Supergiant Games’ Transistor. The game begins when Red, a famous singer, narrowly avoids assassination, and, after pulling the assassin’s weapon from a nearby corpse, decides to hunt down the people who tried to kill her. Red’s journey across the city of Cloudbank measures flashy combat against moments of investigative quietude, building an atmospheric mystery brimming with cyber-noir cool.

In fact, if Transistor deviates from its predecessor in any substantial way other than content, it’s in attitude. Despite its confident display, Bastion’s structure tipped the development team’s hand. The game’s central conceit was that the world literally built itself anew under the protagonist, known only as “the Kid”; as he walked, each step into the unknown carried with it the potential to fall into oblivion. It wasn’t hard to see a young team’s anxiety at releasing an unconventional game to into the wide world reflected in each unsteady movement the Kid made.

Supergiant’s sophomore effort lacks such trepidation, trading unsure steps across a digital void for firm-footed specificity. Transistor is a supremely confident game—so self-aware of its presentation and structure that it’s almost distracting. The game is undeniably conscious of its own cool, and in the hands of a lesser team, this exhibitionism would likely collapse under its own weight. (There is nothing less cool than visibly trying to be cool, after all.)

We measure intrigue against revelation.

Fortunately, Transistor commits so fully to its world and mechanics that its surety appears infiltrates the whole. Red begins her tale of revenge and intrigue when she acquires the mysterious Transistor, a greatsword-like weapon with the ability to absorb the consciousness of the recently deceased. The Transistor pulls double duty as Red’s all-in-one arsenal and as the game’s exposition delivery system, since the weapon’s first victim retains just enough subjectivity to speak after he has been fused with the device.

Transistor captivates by this design of juxtaposition. Red’s silence is made all the more noticeable by the Transistor’s loquaciousness. The vast structures and beautifully animated streets of Cloudbank are made more otherworldly by its emptiness. Static exposition found in message terminals provides a counterpoint to the wild, pirouetting combat. Red seeks to confront her would-be assassins while simultaneously trying to outrun a ruthless systemic enemy. We measure intrigue against revelation. In its most absolute show of confidence, the game trusts that you can fit these pieces together: combat and setting, action and inaction.

Transistor’s combat engages with the same dualism that informs the game’s central tension between coded performativity and human agency. The robotic legions of the Process mimic surveillance equipment with lens-like camera eyes constantly seeking to damage Red, sometimes by actually taking pictures of her. Red’s fight against such systems wages a war on the Camerata’s twisted obsession with her own celebrity, an active rebellion against those who seek to control or eliminate her. When Red takes a turn to orchestrate an attack run, the arena becomes a stage for a dynamic danse macabre as elegant as it is stylish. Performance is her weapon against her oppressors, and she wields it sharply.

Just as I see Supergiant’s uneasiness exercised in the mechanics and themes of Bastion, I cannot help but find Transistor’s obsession with performativity a bit telling of its creators’ desire to break the sophomore slump. It’s not hard to infer that Red’s powerful control over her own performance against a ravenous system reveals glimmers of the team’s relationship with internal and external expectations. If this is the case, Transistor serves as a bold acceptance of the crowd’s challenge and a calculated, confident response to their newfound celebrity. It is a brash argument for the creation of an oeuvre.

After I finished Transistor, my thoughts crept back to that moment when I realized Red could hum at almost any given exploratory moment of the game. I then understood that strange inclusion not as some throwaway mechanic or as a hollow attempt at style for the sake of its neo-noir cool aesthetic. Red hums because I ask it of her, because her audience demands it. I just didn’t expect to be so captivated by her voice that I would actively look for breaks in the game to offer her a stage. After all, she, like the game she inhabits, has some serious pipes.