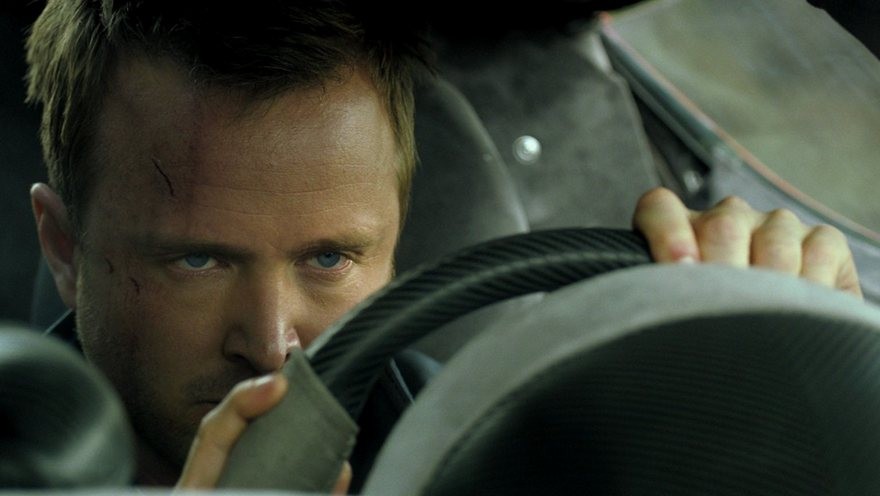 Need for Speed is a total mess of a movie. It features a lackluster cast delivering lines from a script that is narratively untenable. How this is Aaron Paul’s first post Breaking Bad role is beyond the imagination. He was good in that—Breaking Bad has room for actors to succeed, to excel. Here, the only thing which may “accel” are the cars.

But no one expected Need for Speed to be a triumph of cinema. No one saw the trailer and said, “This has promise.” I’m surprised that anyone besides myself showed up at the theater. Even the box office attendant looked at me funny, her eyes filled with incredulity and perhaps despair.

I could talk for hours about the ways in which the movie was bad, the ways in which it failed to execute on so many different levels (like how forced the down-on-their-luck expert car tuning shop feels). But there is some worth in Need for Speed, some tiny glimmering gold dust floating amongst the sediment. Need for Speed is actually the “anti-car movie,” a deconstruction of the ultra spec’ed car culture so entrenched in games and film.

Need for Speed is actually the “anti-car movie”

It’s truly a “road film,” one in which the characters journey and explore not only the 2,600-mile expanse that they cross but also themselves, growing and changing on the way to what they think is their goal.

This is a preposterous thing to happen in a Need for Speed movie.

And yet: it does. Tobey Marshall (Paul) believes that his goal is his revenge against Dino Brewster for murdering his friend Little Pete. His companion, Julia Maddon (Imogen Poots), believes that she needs to protect her employer’s investment, a $2.7 million Shelby Mustang whose drivetrain was built by the late, great Carroll Shelby, car whisperer.

But the story is more about redemption than about revenge. Tobey isn’t driving to the DeLeon (an ultra-secret, ultra-illegal street race) in order to wreck Dino the same way that Dino wrecked Little Pete. Tobey is truly driving west in order to redeem himself for allowing Little Pete to be killed. He’s driving to deal with his misogyny, his insecurities, his father’s passing, and his guilt.

As Tobey travels with Julia he realizes that his heart has been closed to the world since even before Little Pete was PIT’ed by Dino into flipping off a bridge and exploding. This is why it’s a road movie and not a car movie. Tobey grows and changes, learns to appreciate Julia, and the Ford Mustang gets totalled and forgotten by the film. Unlike every other car/racing movie before it, the car, though necessary, is not the star of this particular racing movie. Without the climactic race and a less paint-by-number script, Need for Speed might be a really poignant drama, a story about a man whose friend is murdered and must come to terms with his guilt and crushing debt all while learning to accept a new person into his life.

But as our own Dan Solberg said, Need for Speed: Rivals is not about those things. Rivals is about griefing everyone around you. It’s about sabotaging other racers or even busting them as the cops. It’s about self reliance and causing damage, about driving as far and as fast as you can while maintaining a healthy disrespect for authority or a healthy disrespect for other players if you are police officer. Somehow, perhaps entirely by accident, the Need for Speed movie became the deeper of the two.

Rivals exists for players to vent their driving aggressions in a fast, free-roaming world, where super-cars are not only common, they are the de facto mode of transportation. I don’t think that any racing game has ever been about a personal journey or any kind of growth other than a rapsheet or horsepower. NFS: Rivals certainly isn’t. The player essentially plays the car, not the driver of the car. In fact, it is actually rather difficult to tell who, if anyone, is actually any of the automobiles in this car-world. Unlike Need for Speed, where the car provides conveyance and might as well be anything else (they say Mustang enough for this to be a Western), in Rivals you are the car.

Somehow, the film did not become a car crash highlight reel

What’s funny is that Tobey Marshall might actually really like Need for Speed: Rivals. The idea of a space for racers to work on their cars, join together in races as they see fit, and roam the wonderful expanses of Redview County would probably really excite him. Of course, the game would never be good enough for him, instead needing the feeling of a wheel under his hands and the pedal beneath his feet.

Somehow, the film did not become a car crash highlight reel or an extended car commercial; it seems more based on a coming of age novel I would have read in junior high. That what was “translated” from the game to the film was a compulsion to drive, a literal need for speed, is amazing to me. Somehow, someone managed to say that “Need for Speed” was actually about that very phrase, that some people, gear/petrol heads, have an inherent compulsion to get behind the wheel of a vehicle and make it go very fast. The film is incoherent and is desperately under-acted but it speaks to the very heart of what “driving culture” actually is.

In that respect, Need for Speed is actually a massive failure. It positions itself pretty clearly as a successor to the very popular Fast and Furious series, but instead of creating an action movie or a car movie the filmmakers have chosen to tell a very personal story. Racing games are all about technology—it’s no accident that the new console cycle also came with new racing games—but Need for Speed is about the human heart.

So yes: Need for Speed is a bad movie. But it’s a bad movie that looked at a vacuous, insipid game and injected a small story about Tobey Marshall. In its overwhelming failure as a movie it does something that the games never attempted. Perhaps this is something from which the games could learn—or perhaps the games, like the movie, should keep their focus on the machines.