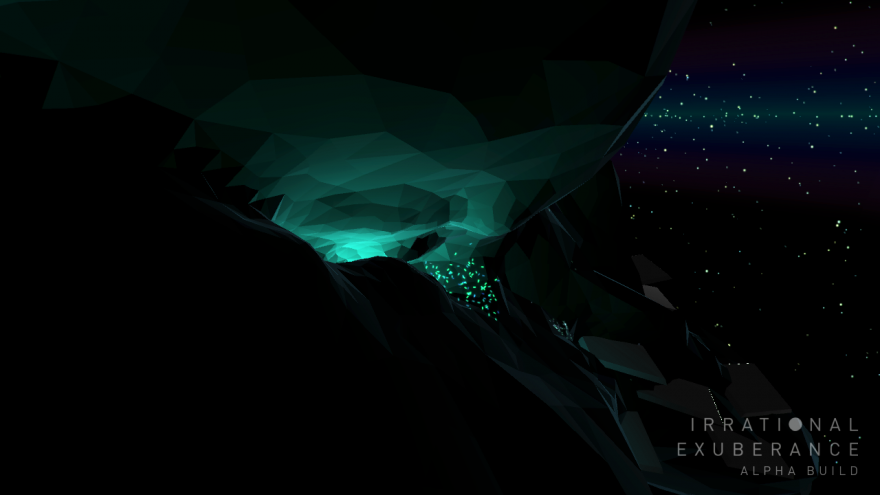 For all the hype that surrounds it, including Oculus’ own self-escalating arms race, I have a problem seeing VR tech as something more than just a peripheral used to control what the right stick of a controller normally would. Demos and gameplay experiments, while decidedly more “immersive,” have up to now more or less been an implementation of Rift as a control device rather than a mechanic in and of itself.

I am aware that this is probably not a popular opinion. But Buffalo Vision’s surreal outerspace exploration game Irrational Exuberance seems like a rebuttal to it nevertheless. Like any revelatory answer to a much-asked question, the solution is simple. Rather than center the technology around the player-controllable dimension of camera manipulation, the game mechanics and environment are rigged in unison with each other such that the act of looking itself becomes a gameplay device.

This isn’t to say that the camera of the game functions similarly to the VR hacking simulator Darknet, where the direction you are looking is the direction you fire a bullet. Rather, Irrational Exuberance functions strictly as an exploration game that relies on your natural curiosity to look just like you would take the world in in real life.

“I want to build the sense of a mysterious space that you are unsure of at first, but one that you gradually start to become accustomed to and the gameplay elements that surround it,” creator Ben Vance told me as I tried out the game on a rooftop in LA this week. “I want the player to see game objectives and know that they can somehow get there.”

This motif is primarily manifested by phosphorescent spots that quite literally catch the edge your eye as you pass them. Seeking them out and looking at them causes them to surge upward into space. The “why” isn’t clear to the player, but given that these spots are the only thing to populate these low-poly asteroids, seeking them out seems like the only directive.

The best example though falls towards the end of the demo: A recently triggered event causes massive spines to stick out of the asteroid the player occupies, but upon obtaining a better view, you find your eyes follow the spines upwards. The protrusions gather on the surface of the asteroid, convene, and then fan back out—you have somehow birthed a tree. When your eyes reach the top, you see a glowing ball of red light, your next objective quite literally in sight. In terms of real life, this makes sense—we often look to the canopy of a tree, our eyes never satisfied with simply the trunk.

Gaming has been much more transient, with collision more or less a toss-up depending on any one game’s ruleset, and rarely are the environmental objects placed ever more than either discrete clues or pretty scenery. It’s as if for the first time a developer has figured out how to have one of those iconic “Zelda room pan-zooms” without having to script the camera movement themselves. Irrational Exuberance’s environments draw the player’s eye naturally and more organically than traditional camera manipulation, and given that this was the developer’s stated goal as well, my excitement for the possibilities of VR have grown. Maybe we’ll figure this thing out, after all.