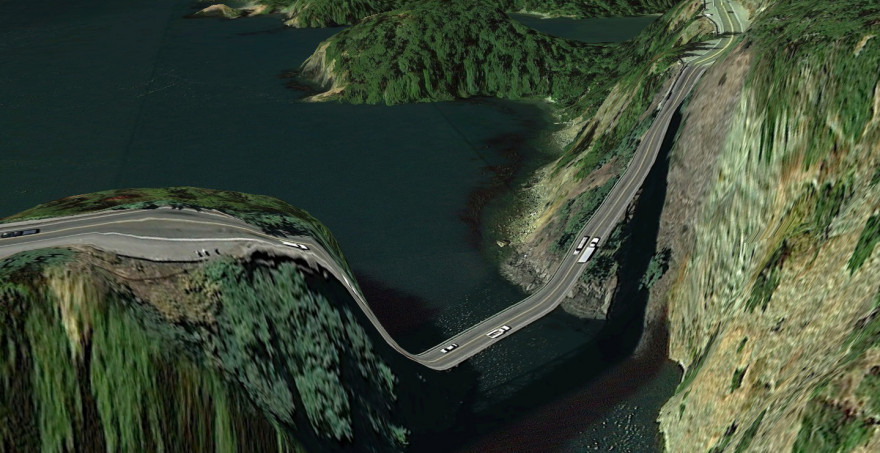 Postcards from Google Earth, a project by Brooklyn-based artist, Clement Valla, which started in 2010, is a collection of warped Google Earth screenshots. As eerie and uncanny as they appear it can be easy to dismiss the images as nothing more than odd screenshots, but by touching on these visual mishaps, Valla wants to pull back the curtain on Google’s processes for us to consider.

With the photorealism of Google Earth its easy to take its visual representations as accurate. Postcards from Google Earth is a reminder that all representations are approximates, no matter how convincing they may seem. It is also easy to characterize these images as “glitches”, but Valla specifically highlights how the fact that these are not glitches, is exactly what makes them interesting. As Valla says:

…these images are not glitches…They are an edge condition—an anomaly within the system, a nonstandard, an outlier, even, but not an error…Google Earth is a database disguised as a photographic representation. These uncanny images focus our attention on that process itself, and the network of algorithms, computers, storage systems, automated cameras, maps, pilots, engineers, photographers, surveyors and map-makers that generate them.

the fact that these are not glitches, is exactly what makes them interesting

While the screenshots are beautiful and strange in and of themselves its only when you view them back-to-back and through the platform of Google Earth in a moving form that this rough process really comes through. The camera movements in and out of areas, from flattened 2D earth to the 3D gradated land masses, and the pixelated loading of each image. These things all highlight the sense of the program’s approximation and process. Luckily Valla has also uploaded an appropriately eerily silent video of these transitions.


Another aspect of this project that Valla is keenly aware of is the ever changing nature of Google’s products. As they say in this detailed post on the project: “As I kept looking for more anomalies, and revisiting anomalies I had already discovered, I noticed the images I had discovered were disappearing. By capturing screenshots of these images in Google Earth, I am pausing them and pulling them out of the update cycle.” In this sense the update cycle, although massively constructive in that it improves the software, is also destructive, in that it can fundamentally change how it works and is experienced.

The project is called “Postcards from…” to reflect how the images are caught in time, unique, and also strange. If you want to feel like a tourist of a distorted version of the Earth from the comfort of your screen, be sure to check out the project’s website. If you’d like to keep up to date with Clement Valla’s work, check out their Twitter.