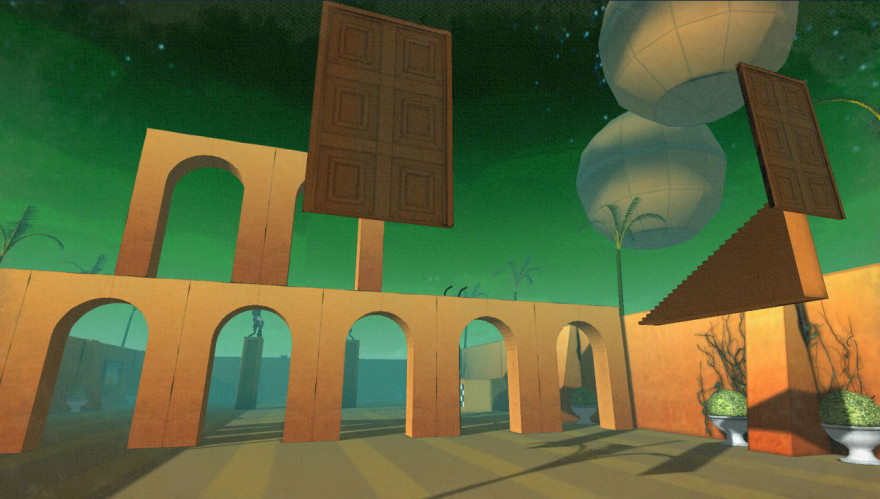 Behind the sunlit arches of amber stone and their elongated shadows, behind the marble busts poised lonesome in the air, behind the ivy-crept porticos sitting empty with umbra, there lies a self-portrait of the Italian artist Giorgio de Chirico. His aged quilt-like face is the last sight for you to take in as you leave the videogame tribute to him, SURREALISTa. It’s appropriate in that it positions de Chirico behind all his work, for he is remembered more for his legacy than his seminal talents—he almost seemed to foresee this by writing “What shall I love if not the enigma?” on one of his self-portraits.

To look at de Chirico’s work today is to recognize the pieces by many other artists that were inspired by it, who configured them in their own styles, and often ended up becoming more well-known for it. With his own “scuola metafisica” art movement, de Chirico lent himself unknowingly to being a grindstone that the Surrealists refined their own flair against. Salvador Dali is the most obvious and perhaps most famous example of this: with his own paintings, he riffed on de Chirico’s striking use of perspective and established, yet sparing, motifs.

But what are these motifs? If you’re not familiar with de Chirico’s distant towers, his endless colonnades, the classical sculptures that grow heads and hands through the apertures of his urbane architecture, then you will be after you’re through with SURREALISTa. The game is a virtual gallery built for and by his art. Paintings hang on walls in arcades filled with the distinctive chartreuse emptiness of de Chirico’s landscapes. The ground is divided by shadow and light, there are staircases that lead to nowhere, doors hover in space. It also has all the Greek and Italian flavor of de Chirico’s painting; the classical sculpted icons of each culture used in lonesome portraiture, creating what has previously been described as enigmatic visual poetry.

What de Chirico was especially profound at was in shrinking volumes with perspective, so that a group of apples in the foreground seemed to dwarf a cityscape in the background. Through his measured use of space and object placement, he invites us to question the nature of reality; placing the 2D truth of the image against the 3D impression it purports to illustrate.

a megalith floating in the electric of the sky.

In SURREALISTa, the strangeness is rendered in full 3D so that you can explore the kinds of backgrounds that de Chirico’s paintings depicted. It’s also arranged so that you have to climb the towers that stand as powerful symbols, getting intimate with them in a whole new way due a virtual closeness that wasn’t possible before. And, should you get stuck at one point in your fey exploration, know that you can stand on the black-and-white tiles to knock on and eventually open the doors to nowhere (which actually advance you to the next stage).

Also fitting is that amid this de Chirico-esque virtual world are examples that are only influenced by his work, not belonging directly to his oeuvre. They manage to blend in just as easy. There’s a Dali-esque apple, enormous and green, sat under a megalith floating in the electric of the sky, for example. But the first of these tributes to de Chirico’s legacy can be seen right at the start: the front cover of the videogame Ico, which takes directly from de Chirico’s use of color, space, and classical architecture, fills up one of the frames on the wall. It goes to show that de Chirico not only influenced the painting, literature, and cinema of the 20th century, but continues to have purchase on the videogames of the following century also. It’s only right that one should act as a tribute entirely to him.