The United States is a big country. The enormity of the land—and the opportunity to gouge a living from its many mountains, forests, and waters—is partially responsible for defining the American Dream. The birth of the concept comes from the initial waves of European settlers, many of them dispossessed by their birth nations, who came to the New World with the fairly reasonable expectation of carving something out of the land. The idea, never true but always intoxicating, that America was a place where a person could live whatever kind of life she wanted, getting rich by simply working really hard at it, has always been central to the nation’s mythological stature. The American Dream is that there will always be a way forward—that grit and fortitude are enough to survive (and preferably thrive through) just about anything. If you can’t figure it out in the United States, the idea goes, you only have yourself to blame.

This is the guiding principle of most survival videogames, from DayZ and Rust to The Forest and State of Decay. But The Flame in the Flood, which recently began a playable beta, makes its thematic concerns explicit through an aesthetic firmly rooted in traditional Americana. Developer The Molasses Flood doesn’t hide its influences. The young protagonist’s name is Scout and she and her constant companion, an old, glasses-wearing dog called Aesop, are on a riverboat journey through the watery heart of a post-apocalyptic rendition of the American South. Their raft, cobbled together from a rusted car chassis, planks of wood, and tires, takes them to the various islands dotting the alternately strong and placid currents of a pseudo-Mississippi, the player weaving between fallen highway signs and the carcasses of pre-disaster vehicles.

The game requires Scout and Aesop to constantly return to the river. The land they find is quickly exhausted of the scrap, fresh water, edible plants, and other resources necessary to craft the tools, medicine, and food for survival. The focus on the raft and the companionship between human and dog evokes quintessentially American stories like Twain’s Adventures of Huckleberry Finn or Steinbeck’s Travels with Charley. The two of them, drifting through the heart of the nation, relying on one another to keep going, is a travel story in the tradition of the country’s defining literature. (There’s a perilous river journey in Joseph Conrad’s Heart of Darkness, too, but many are more likely to think of how Apocalypse Now’s deeply American discussion of war used this structure than the book it’s based on.)

Flood makes its aims even clearer through Chuck Ragan’s score. The former Hot Water Music frontman’s soundtrack is all acoustic guitar, fiddles, harmonicas, slides, and gruff dude vocals—a non-specific American folk that combines shades of down-home bluegrass with the howling of a politically indignant Springsteen. The music is suitably earthy accompaniment for the environment, whose mix of autumnal trees and muggy swampland place it in a generic version of the South.

Scout and the islands, rivers, and animals of the game are rendered as if they’ve been made from intricately folded paper. Flood’s visual style—black sketch lines and super-saturated colors (often with nicely visible brush strokes)—reinforces both the beauty and danger of the natural world. Storms and nightfall—and the cold and wet they bring—are dramatically gloomy, making it more difficult for the player to find important resources or notice when a hungry wolf is hanging out in the periphery. When the morning arrives and the sun beats down on the foamy river or the dirt and plants of the islands, it doesn’t just make the game prettier but reinforces a sense of safety, too. The game is strongest when it leans into the feel of these moments—when the quivery warmth of a steel guitar fades in while the player navigates a dangerous section of foaming whitewater rapids or an item description includes a folksy description (mulberries are good for warding off hunger, but too many will give Scout “the scoots”). 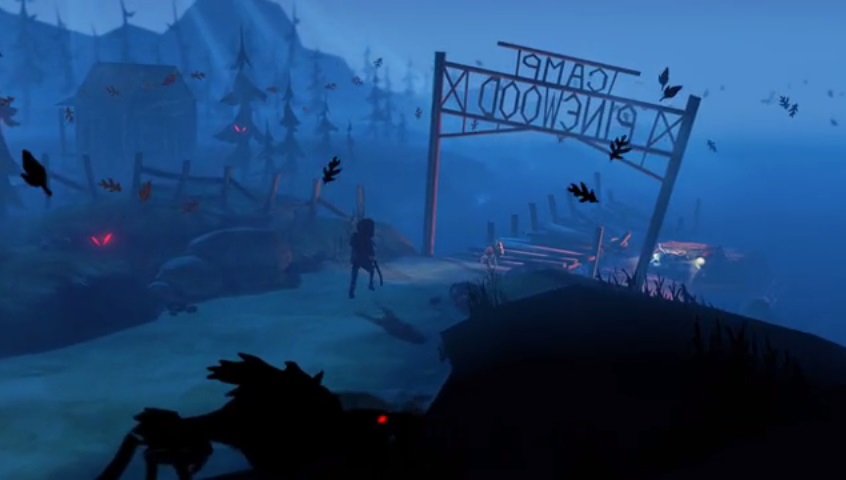 That the aesthetic is so well-realized makes it understandable that, at least in its current state, the game is also pretty ruthless. Death comes incredibly quickly and often in Flood. Scout goes from hungry to dying of starvation within minutes; an unexpected encounter with a wolf almost always ends in a fatal mauling; the random generation of supplies means that it’s completely possible to fail with even the most cautious action and careful planning. This emphasis on sudden misfortune feels mean-spirited, but tonally consistent. The same natural wealth and freedom that characterizes the American Dream is double-edged, after all. There’s a fortune in the wilderness, but the wilderness can also be hostile; early America’s lack of government oversight doesn’t just encourage fair-minded entrepreneurs, but also those willing to use civic freedom as a means to get one-up on the rest of the market, regardless of human cost. By its very nature, the American Dream gives and the American Dream takes.

In John Irving’s A Widow for One Year, a Dutch immigrant thinks: “There is no intolerance in America that compares to the peculiarly American intolerance for lack of success.” This is The Flame in the Flood’s attitude—one where Scout (and the player’s) will to succeed at life is tested against the vast indifference of their environment. Its emphasis on foraging, crafting, and scrappy survivalism is overly familiar—having already been thoroughly explored in games like The Long Dark and Don’t Starve—and its (maybe only current) lack of plot makes it hard to push forward through the repetitive process of restarting yet another trip down the river. But its aesthetic—the sights and sounds of The Molasses Flood’s drowned America—and the harshness of its gameplay systems are welcome signs of the developer’s thematic confidence. The player is plunged into a properly rebooted version of America, asked to test her ability to succeed at getting what she needs from it, and appropriately blamed for coming out wanting.