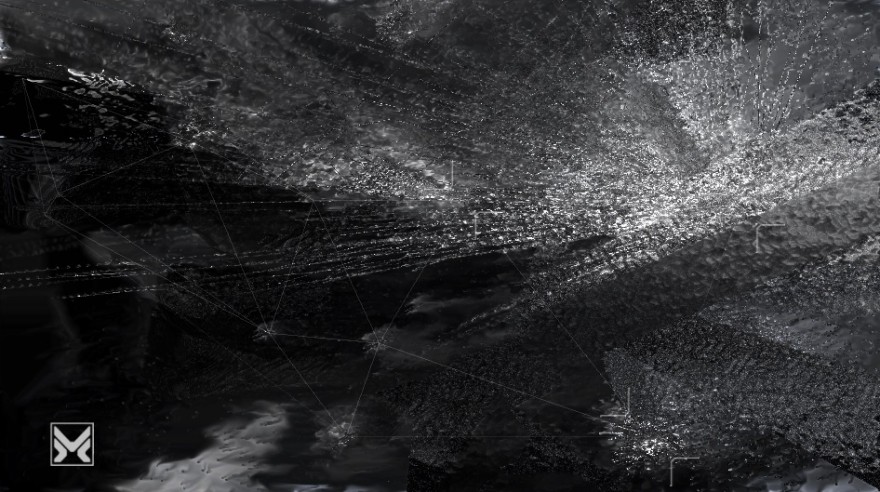 Imagine all bass noise turned into a vast and violent gray ocean large enough to swallow skyscrapers. You can see waves of low frequencies crashing into wet, rhythmic beats, while a deafening digital screech cuts through like a torpedo. The waters thrash, churning into an erratic charcoal texture, stinging your eyes as if heavy black smoke.

“International Bass Agency” (their words, not mine) MethLab Agency found the perfect partner for its musical talent in the dark visual distortions of Memories of a Broken Dimension creator XRA. He created the bleeding metallic spirits and circumambient glitch seas while MethLab supplied the ear-pounding audio to punctuate the navigable 3D space.

Exposing your senses to the result of this collaboration results in the same kind of disorientation you get when head-banging a meter away from a 10-foot speaker at full volume during a noise concert. But it’s not all a numbing exercise: as you explore the stygian tides of this virtual space, a visible structure does pierce through the confusion in the form of a wireframe web. Strung together on the nodes of this web are fragments of drum and bass, techno, IDM, and dubstep by artists with names like “VHS Head,” “Broken Note,” and “Machine Code” that you can collect.

This is where the first part of MethLab’s three-part self-styled identity—”uncompromising, experimental, aphotic music”—falls apart for me. XRA’s virtual world is, of course, a way of letting people interact with the music of MethLab’s artists in a manner fitting of their style. But it’s also a way to promote them, and the hyperlinks that are necessary as part of that tars the purity of the experience.

You can’t listen to the songs you’ve pieced together while swimming through the world around you. Instead, you have to sit in a static menu to listen to the songs, which feels disjointed from the freedom you have otherwise. But it’s far from being bad. The visuals do react to the beats and growls of the music while you’re listening to it, just like any music visualizer would.

You’re going to want to check out XRA and MethLab’s collaboration if you have an affinity for bass-driven music, or for disorienting and absorbing virtual world exploration.

You can play it in your browser, or you can download it for Windows and Mac right here.