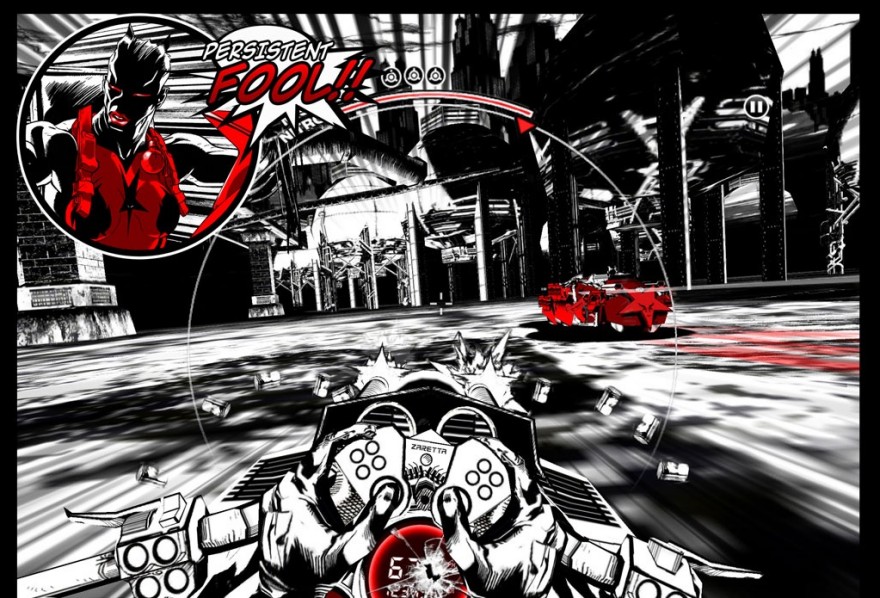 Tongue stiff to his right cheek, head tilted to the side, arms bent like wings with elbows at their peak. No, it’s not a royal jester in mid-pantomime. It’s my friend playing Destruction Derby on a PlayStation back in 1996. His involuntary performance is burned into my mind.

If only he could see me now. I’m in an office chair, leaning into bends that don’t exist, my hands jigging as if navigating a bumpy rally track. He’d surely return my mocking brays from long ago, but I wouldn’t care—I’m too busy upholding Mephistopheles’s law.

there’s a beautiful fluidity to be seen as the expressive art style transitions into motion.

When playing practically any other racing game I sit still with plastic rested between my palms, an expression of utter passivity. SXPD doesn’t allow such disengagement. Playing on an iPad, its gyrometer-based controls demand at least that your arms wrestle it as if a steering wheel; the rest of your body just follows suit.

That the controls have you keeping pace with the abrupt turns and near-misses of your combat-ready hover bike helps greatly in absorbing you into the fictional 52nd state of New Royal. No longer am I the fleshy example of a mid-20s modern human, I’m a member of the all-female police force SXPD, with no name, no love; just a number, a neurological stimulant, and a tight black suit.

Part black-and-white 2000AD-esque digital comic, part modern retake on 3D Deathchase; SXPD comes together as you’d hope. You swipe through expressive panels depicting violent exchanges between the SXPD and the mysterious yet dangerous Obeah Dolls, and the force’s greater threat in punk-terrorist organization The Secret Order of the Black Seraphim. A chase scene is broiling underneath all the dialogue and explosions.

Then, just as the action kicks in, you see a panel depicting a first-person view. Swipe, and you dive into the comic book world, without compromise to visual fidelity—there’s a beautiful fluidity to be seen as the expressive art style transitions into motion. You’re slaloming through stark underground industry works, turning the front-facing guns hot red with use, trying to tailgate the bikes swerving ahead with a mix of nitro boosts and steady steering.

SXPD isn’t the best comic book you’ll ever read. Nor is it the best videogame out there. But its charitable creators have interwoven the two mediums into a frantic and engrossing interactive fiction that makes you protest as the “To Be Continued” fades to black.

You can purchase SXPD for iOS on the App Store. It will be coming to Android soon.