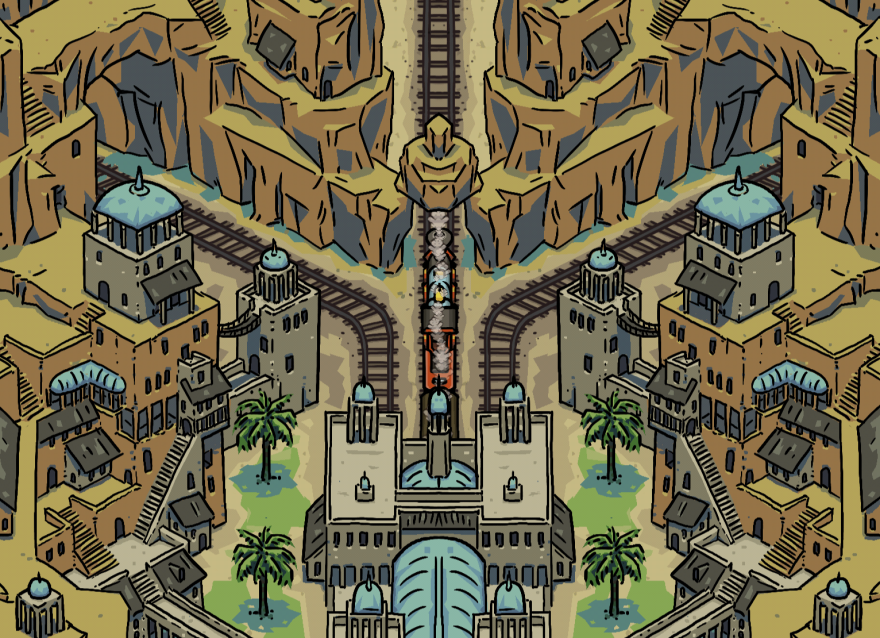 I never thought a game which functions contently enough on the back of a cereal box needed a digital version, but what do I know? Clearly the find-some-objects genre has an audience, enclosing its own dull corner of tablet games, asking players to peck at the screen for certain things hidden amongst, you know, other things. Or, in the spot-the-difference variation, things that are not there amongst those other things. But it’d be shallow to write games off based on sub-genre, even if it can be sort of cookie cutter. Just as Hawaiians discovered beauty within SPAM, even the most banal contributions to culture can be spiced up with some spry ideas and the right dressing. Symmetrain discovers that even the most toothless goal can become ravenous with enough momentum.

As in, literal momentum.

Have you ever gone on a train and worried you chose the less scenic window than that across the aisle? Well, the passengers of the Symmetrain don’t. Or at least, they won’t if you, the big-fingered sky-god, do your job correctly. Symmetrain is about voyages through landscapes, stretching over land and sea, drawn with a grace that splits the difference between Herge and Wes Anderson.

Objects, trees, windmills, boats, fields, houses—each begin to drip in slowly,  and you prod the spots that don’t mirror the left and right side of the train. As levels go on, the items composing the similarities become more deceptively similar or distracting. Earn lives by getting through a segment with little error; watch the train come to a pitiful stop when a bramble of anomalies take you down.

It’s intuitive enough. The brain has a natural inclination to notice when something isn’t symmetrical, when something is off. But the brain won’t always know what exactly is off. It’s that cruel hitch that could throw you off the caboose, and when it does Symmetrain washes from a pastel blue to a blustery red rage.

In this activity’s natural form, the colouring book, the challenge is null. There is no clock, there is no failure. There is victory or doing it later. It’s about as much of a game as a magic eye puzzle. Even many tablet object-hunt games are flexible with the challenge, willing to reward you at your own pace, egging you on with some mad lib ghost story. In Symmetrain, that colouring book grows a pair of legs and starts jogging away.

You could have 20 or 200 lives but it isn’t going to matter when things goes pear-shaped. That multiplier you were carefully hoarded to get to the next level is now shit.

The challenge that seemed so inconsequential moments before is now paces away from enraging. Symmetrain seems to be a game hoarding the difficulty that its lazier predecessors kept at bay, an act of spite against expectations. When the game gets tough it throws you to the wolves; you can either laugh or grow furious. Differences between both sides start to whir, and the helping hand that tries to throw you a lifeline before targets leave the screen is a struggle to keep up with by itself. You could have 20 or 200 lives but it isn’t going to matter when things goes pear-shaped. That multiplier you were carefully hoarded to get to the next level is now shit. The end result feels disastrous, like, well, a train wreck.

I never felt that progressive middle-ground between so-slow you’ll fall asleep and so-fast you can’t blink. By the time you hit the Pennsylvanian line, four stages in, you’re up against impossible odds, just trying to stay alive. This, then, is a strange thing for such a bucolic genre of game, but its this very iconoclasm that makes it interesting. Its soft, strumming soundtrack, which you could use to score a postcard, is accompanied by you frothily shouting at your smart phone. Not many other games create such sounds.