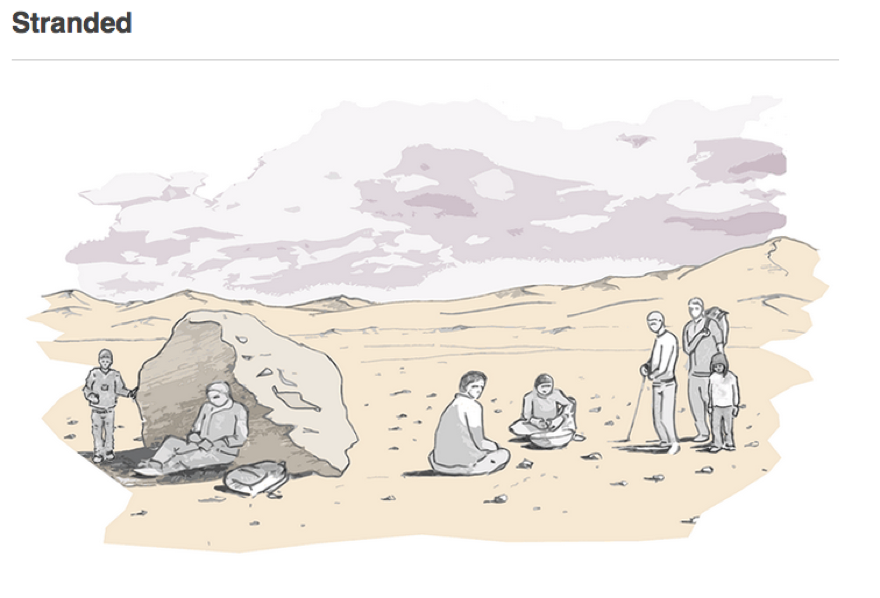 Syria, it can safely be said, is not a good place to be right now. That is the only time in this article where safety and Syria will share the same sentence, and with cause: conflicts—be they internal, international, or with ISIS—have made Syria an incredibly dangerous place to live. Human Rights Watch and the United Nations High Commissioner for Refugees estimate that between 3.8 and 3.9 million refugees have fled Syria. These refugees’ immediate prospects, however, remain bleak.

Between 3.8 and 3.9 million refugees have fled Syria.

Syrian Journey, a newsgame created by the BBC, allows you to get a sense of how bleak those options are. While most refugees are concentrated in neighbouring countries, which cannot cope with their needs and numbers, the BBC’s game focuses on those attempting to make the journey to Europe. There are no great options: Quick, choose between a high risk of drowning at sea or getting caught at a land crossing? These are horrible choices, choices that nobody should ever have to make, and that’s what makes them horrible. These are choices that Syrian refugees must face. You should give the newsgame a try, but don’t expect to come out feeling good about life or the world. It’s not that kind of game.

Neither the Daily Mail nor The Sun share this assessment of Syrian Journey. The British publications, which are hardly known for resisting an opportunity to bash the BBC, have both come out against the game. The Sun quoted ‘Middle East expert’ Chris Walker saying: “In the midst of probably the bloodiest Syrian crisis this century, the decision of the BBC to transform the human suffering of literally millions into a children’s game beggars belief.” The Daily Mail reproduced that quote while adding some incensed tweets. Thus, a controversy of sorts was born.

Beyond political opportunism, is there anything to be made of this furore?

The Guardian’s Keith Stuart correctly points out that “It’s telling that the Mail’s expert refers to Syrian Journey as a “children’s game” despite the fact that no such claim is made on the game’s home page.” Syrian Journey is a game for adults, though its tragedy is compounded by the fact that a disproportionate number of Syrian refugees are children. You might not want your child to play Syrian Journey, but there are plenty of kids who don’t have the luxury of opting out of this political and humanitarian tragedy.

More broadly, though, the sadness of Syrian Journey is indicative of how The Sun and the Daily Mail may have missed the plot here. Newsgames are not frivolous entertainment. Rather, as The New School’s Heather Chaplin puts it, “We have to accept that journalism is a bigger umbrella now and that things we might not immediately think of as being serious journalism serve the purpose of serious journalism.”

This defense of seriousness in games need not be limited to those produced by and for journalistic enterprises. There are plenty of games that don’t fit the worldview espoused by Syrian Journey’s critics. Empathy games, for instance, encourage players to reckon with the challenges of alcoholism, depression, and cancer. These games, even if they are not journalistic ventures, deserve the same defense that Syrian Journey has received.

You can play Syrian Journey here.