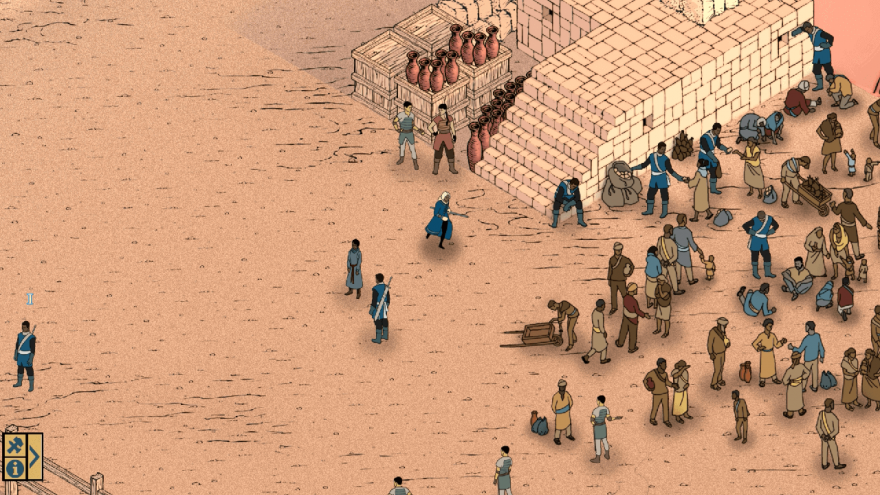 According to its Kickstarter campaign, the first seed of what would become Tahira: Echoes of the Astral Empire was the game’s emblematic image: a woman in blue looks down at her red, burning city. There’s a paucity of details that add to the drama; the mountains are uniformly dark, while the desert is boundless and bare. Both are supported by the game’s plain, unsophisticated aesthetic, charmingly complete with rotoscope animation. All of the above combine to create an interesting drama out of drabness: two splashes of color set against a dun disaster.

But this image represents the whole of Tahira in more way than one: a few bright spots contrasted against a dull plain.

there’s little of substance beneath the sands or stone

Tahira: Echoes of the Astral Empire is set on a dying planet centuries after the collapse of a stellar empire. As the world begins to fall apart, the Astral Empire seeks to conquer their way to the city of Babylon by, effectively, wiping clean any state between them and their goal. The protagonist, Princess Tahira, of one such kingdom, Avestan, returns from a self-imposed exile to try and save her people from this genocidal army. But being a savior here merely amounts to repeated delaying tactics and skirmishes. She aims to hold back the Astral Empire’s army long enough for the long stream of refugees to escape.

Unfortunately, the narrative’s more enticing broad strokes are betrayed by the overall poverty of the script. There are a few wonderful moments: “A city built for millions, inhabited by thousands,” laments the villain, and the line implies a fall so profound and damaging that only the memory of unspecified loss remains. But then we return to Tahira’s main arc, which concerns that of a princess coming to terms with her role. Again, it’s all promising, until her conversations with her horse (who responds with things like “dejected whinny”) begin to tire. Until bad jokes between supporting characters about baldness and ‘beautiful’ hair fall flat. Until the player bears witness to tedious flirtation that would drive anyone to celibacy: “I’m surprised you got here so soon, your little legs must make travel difficult.” “My little legs, but you are forgetting my most important leg—” is his penis. Yes, we get it.

Perhaps I’m judging it by the wrong benchmark. Tahira’s Kickstarter page helpfully lists the game’s inspiration for the tactical RPG elements: Fire Emblem, Advance Wars, and The Banner Saga, for example. Indeed, certain elements—the animation style, the isometric viewpoint, the turn-based battles, and even the double health meter of armor and HP—are lifted wholesale from The Banner Saga. And, if Tahira does anything well, it is in learning the lessons of its tutors: just as in The Banner Saga, Tahira’s battles are defined by a sense of desperate flight. The player’s rag-tag group are constantly running fighting retreats; battles are comprised of multiple stages, from the entrance to a monastery, to its rooftops, to its rear, from the walls of a fortress to its courtyard. You’re either trying to set a trap to delay the enemy, or break through one.

a few bright spots against a dull plain

Tahira does manage to innovate on its predecessors in places. There are opportunities to hide your soldiers, waiting for the right moment to reveal them in an ambush. It’s a neat gimmick, and helps maintain that sense of being on the defensive. Granted, this oppressed atmosphere isn’t always consistently present. It is hard to present yourselves as being on the ropes when one unit’s eminently spammable attack is able to churn through eight archers in a single turn. But this objection feels more like a quibble when it’s the only thing stopping one of your heroes from being aerated.

The game’s geography represents another stream of inspiration. The terrain of various battlefields are stark deserts in the model of Rajasthan or the empty quarter. The mountains are meant to evoke the Himalayas, while cities are inspired by the Baghdad of the One Thousand and One Nights, and sit in the appreciative vein of Aladdin’s (1992) Agrabah. All of this was inspired by lead writer and producer Peter Castle’s travels across the Middle-East and India, and the attention to stylized detail reveals a real affection for the original inspiration. But there’s little of substance beneath the sands or stone: the monastery has prayer wheels, but they are just another piece of terrain to block an enemy’s flanking move. It’s not that the world is unlovely—far from it! It’s that the sun and stone and sand is ultimately uninteresting. The game’s villain monologues about dirt and how his men will not die in it. That dirt is the heroine’s home, and she will stand by it, we are left to presume. But without anything more compelling than a binary dynamic, without any emotional hooks, it’s all just a backdrop in the end.

This shallowness ends up defining the entire game. As Michelle Ehrhardt noted in her earlier discussion of the game, details from the contrast in armor styles between the plucky Avestan and genocidal Astral Empire, and the very story of a conquering army burning through the desert, evoke the crusades and a long history of brutal colonialism. But nothing is done with these connections: the Astral Empire views the Avestans as mere animals, fit only for slaughter; an attitude that feeds into the ease with which they slaughter civilians. Both sides have faith in some kind of light, but there’s no Kingdom of Heaven-esque depiction of religiously-motivated warfare. The guerrilla warfare element is just as intriguing, but remains unexplored. Furthermore, the game simply feels incomplete. The narrative that we have lacks any real resolution, it being the bare story of a flight up the mountains. More is hinted at in both the background material and in the story itself, but that ‘more’ is utterly invisible. What’s left is disdainful slaughter and badly-written hand wringing segueing into bad jokes.

And that’s all you get: a competently executed tactical RPG with a jejune script and stylized window dressing. Perhaps the sequel baiting at its end will lead to a follow-up that redeems Tahira: Echoes of the Astral Empire. But, for now, the game is just echoes; echoes of The Banner Saga, of India and the Middle-East, and of poorly-written Saturday morning cartoons. But the thing about echoes is that they are always less substantial than the original word: “good enough” comes back to us as “enough.”