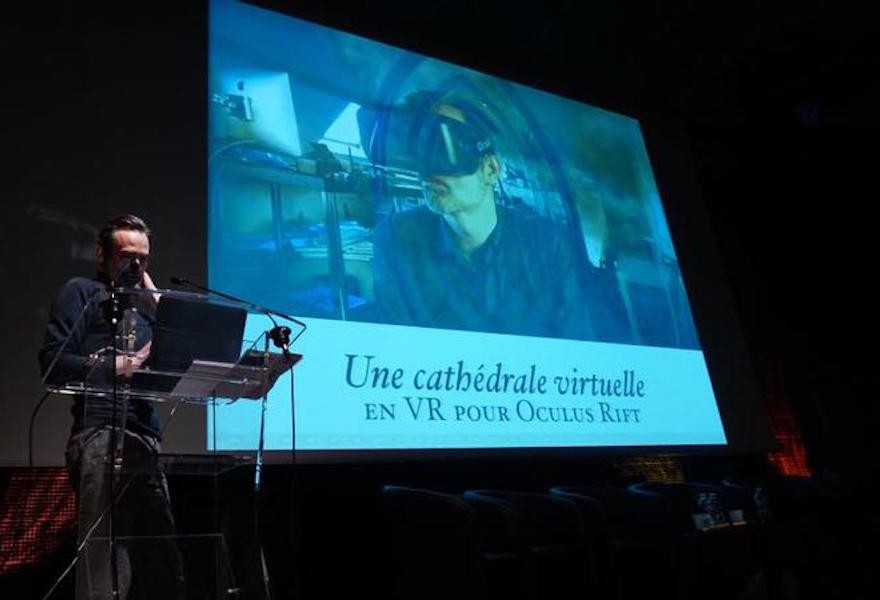 Since being successfully funded on Kickstarter in October 2015, details on Tale of Tales’s latest project, a digital collection of animated Christian dioramas titled Cathedral in the Clouds, have been light. “We haven’t produced anything yet,” explains co-creator Michaël  Samyn, who is working on Cathedral in the Clouds along with his partner Aureia Harvey. However, during a recent presentation at France’s CFIC cultural heritage and digital media forum, Samyn finally released new information about the project, walking the audience through how he and Harvey came up with the idea for it, as well as how they’re hoping to translate the Gothic and Renaissance-era religious art that inspired it into virtual reality.

The presentation opened with a brief explanation of Tale of Tales’s history as a studio, as well as how the pair’s taste in art led them to games in the first place. “The art that we enjoy tends to be older,” explained Samyn, referencing the many cathedrals and religious structures of their current hometown of Ghent, Belgium. He explained that while they appreciate the realistic beauty and figuration of older art, the irony and abstraction of modern art “just doesn’t do it for us.” Because videogames, too, are often concerned with realistic representation, they decided to start making games as a way to “continue the traditions of art before modernism interrupted them.” Like Renaissance-era master painters and Flemish primitives, they see themselves as working with the high technology of the time to tell stories that are nonetheless an ancient part of Western culture.

A still from Samyn’s presentation likening games to traditional art

Despite being atheists, the pair has been drawn to work with Christianity, as it is a subject of much of the art from which they draw inspiration. “A lot of these paintings and sculptures depict religious themes and characters,” explained Samyn. “We look up to them, we admire them, and they help us understand and deal with our lives.” It is the universal themes of “kindness, patience, and self-sacrifice” found in the religious art that inspire them and that that they hope to make more accessible through technology. “We have a feeling that a lot of people now don’t experience that with old art,” said Samyn. “So we would like to create something that people can connect to more easily.”

This led to the idea for Cathedral in the Clouds, which hopes to recontextualize Christianity and its many artistic influences into a specifically digital experience that people around the world can access on almost any platform. The project is split into two halves, the first being a series of digital depictions of Saints for “desktop, laptop, tablet, smartphone, web, even video and print,” and the second being a fully-explorable virtual reality cathedral to house them. Because of its digital nature, Tale of Tales also expects the cathedral to be endless, with the ability to continually expand over time.

themes of “kindness, patience, and self-sacrifice”

So far, much of this has already been covered by the project’s Kickstarter page, but the next leg of Samyn’s presentation then laid out new details as to how each half of the project is being built. For the Saint depictions, they are meant to be like “home editions” of triptychs, devotional cabinets, and altars, showing a rendition of a scene around a central character, such as a Saint, the Virgin Mary, or Jesus. To depict the gravity of these figures, who Samyn compares to superheroes, they will be life size, meaning that users will have to scroll up and down to view the whole piece.

To take advantage of their digital nature, the cabinets will be animated, portraying specific biblical scenes and making dramatic twists to explain the significance of the character portrayed. However, Samyn insisted that the pieces not be viewed as “alive” so much as being virtual statues, again calling back to the art that influenced the project. “We’re very inspired by the style of medieval sculpture,” explained Samyn. “But also by African sculpture and even some modernists.” Rather than wanting the scenes to be photorealistic, he prefers that they be read as “symbolic representations of a realm that cannot be perceived.”

For the cathedral half of the project, which will collect all of the Saint depictions into a single virtual reality app, the duo expects a bit more work from its users. Whereas the saint depictions are being made with availability in mind, the cathedral will instead require users to overcome a number of barriers, including the cost of virtual reality, the discomfort of wearing a VR headset, and the public perception of VR as a “very nerdy, very uncool thing to do.” This is meant to symbolize the sacrifices medieval Christians would have to make to show their devotion, similar to how a monk might wear an uncomfortable hairshirt as a way to humble himself before God. Like planning a trip to Ghent to visit its famous cathedrals, Samyn stated that “a sort of pilgrimage will be needed to see our cathedral.”

Samyn ended his presentation by meditating on the connection between cyberspace and the afterlife. “Back in the 90s we thought of the internet as a place, a sort of other planet, where different rules applied,” he explained. “Sometimes it felt a bit like the afterlife, like eternity.” By placing a cathedral in the cloud, which is both a name for cyberspace as well as the supposed location of Heaven, Tale of Tales hopes to explore how these two non-physical planes intersect.

“a sort of pilgrimage will be needed to see our cathedral”

At the same time, Samyn acknowledges the Saint depictions themselves as not a space, but a time. Whereas physical art is experienced by sharing the same space as an object, he explains, digital art instead asks viewers to share time with it instead. Think of it as the difference between visiting a museum to see the original version of a famous piece of art and sitting down pretty much anywhere with an internet connection to watch a Netflix series. This is why it is so important to Tale of Tales that the scenes be animated, as “this is where the art happens.” As such, the hopes is that Cathedral in the Clouds not only reconciles both the ancient and modern interpretations of ethereal places, but also continues medieval traditions in a way that only modern technology can achieve.

The project is entirely non-commercial, and will be made available for free to anyone who has the technology to access it. As with a real cathedral, patrons are able to donate via Paypal or Patreon, or even make commissions for a new chapel in their name.